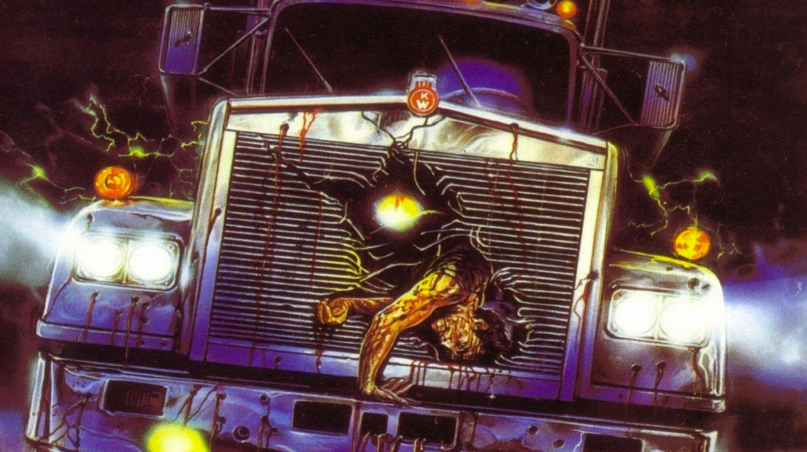 Ever wonder which movies inspire your favorite bands or how filmmakers work with artists to compile your favorite soundtracks? Sound to Screen is a regular feature that explores where film and music intersect. This time around, he discusses Stephen King’s one rock-fueled directorial feature, Maximum Overdrive.

“I’m gonna scare the hell out of you!” – Stephen King, in Maximum Overdrive’s 1986 trailer

“The problem with that film is that I was coked out of my mind all through its production, and I really didn’t know what I was doing [as the director of the film].” – Stephen King in Hollywood’s Stephen King in 2003

What is it about cocaine that amplifies confidence so much? Stephen King promised audiences a scary automotive thriller, only to produce a film of empty ideas. But what a brash accident Maximum Overdrive was. Oh, sure, there’s some hefty analytical discourse waiting to be found within Stephen King’s Maximum Overdrive. Perhaps it’s a post-gas crisis allegory about over-consumption, or a diatribe about the consumer-crazed ‘80s, or something about the rarity of a literary figure being given the keys to movie-making only to blow it. But honestly, that hoity-toity stuff goes straight out the car window the second a pee-wee baseball player’s head gets demolished by a steamroller. And King wanted that little moment to be bloodier, apparently.

To that, have you ever actually seen Maximum Overdrive?

It’s egregious. It’s noxious ‘80s gore mania splattered atop a boneheaded allegory about technology controlling our lives, or something commercially beatnik like that. But here’s the rub: King’s movie was so bad that time has made it quite enjoyable in a campy, drive-in movie way. Emilio Estevez picks off trucks with automatic rifles, electric knives run amok, and Gustavo Fring from Breaking Bad is electrocuted in an arcade. Mega producer Dino De Laurentiis (King Kong ’76, Flash Gordon) had the money, and King had the clout to helm a major movie – Tom Wolfe and Dean Koontz were never afforded that luxury. And King put himself all over the thing. A Green Goblin truck, massive amounts of gore, yokel wisdom and characterizations, and of course, a score from King’s all-time favorite band, AC/DC.

That’s what brings us here today.

It’s been 30 years since King’s first and last foray into directing. For a guy known for cranking out quality print chills by the gross, it’s fascinating to see him suffer behind the camera. The famed author’s film is a feast in idiotic Cinemania. Maximum Overdrive has enjoyed an unreasonably healthy afterlife thanks to its crude action, its unbelievably nonsensical premise, and its crunchy, nasty, oh-so-sweet rock score. Have you ever seen a killer lawnmower make its move with Angus Young, Cliff Williams, and Stevie Young’s howling guitars scratching all over each other? Didn’t think so. The score is like a heavy-metal attempt at Psycho. But how in the world did all this happen?

In the mid-‘80s, King had developed a strong relationship with Dino De Laurentiis. King was already a name franchise by 1982, with Carrie, Cujo, Christine, The Dead Zone, and The Shining all notable hits “Based on the novel by Stephen King.” De Laurentiis went on to produce a feature adaptation of King’s Firestarter in 1984. A modest success at the box office ($17 million on an estimated $15 million budget), the film did better than it sounded given that De Laurentiis had already pre-sold the film to tons of markets. Smooth. With that success, King was offered a chance to draft his own original script for De Laurentiis. The resulting project was Cat’s Eye, complete with King’s name above the title. Not director Lewis Teague’s Cat’s Eye. Not De Laurentiis’ Cat’s Eye. King’s Cat’s Eye. The three-piece fantasy horror anthology was about strange things seen through the eye of a stray cat, and King was supposedly on set, learning and assisting, to the point where he grew a strong and even familial bond with De Laurentiis.

And this is where it gets good. Apparently, he always wanted to direct.

According to Maximum Overdrive’s producer, Martha De Laurentiis (Dino’s wife from 1990 until his death), in Slashfilm’s terrific oral history of the film, King was not shy about expressing interest in putting down the pen and picking up a camera. The pitch was rooted in one of King’s early shorts, Trucks, about mysteriously sentient killer trucks. In the movie? The trucks are powered by a green rotoscope cloud hovering around the Earth. Way to drop the mystery. The cars kill, and even electronics get in on the fun. Gas pumps gain sentience and spray people in the eyes. Soda machines kill with what we can only assume are 100 mph cans. Physics, electricity, logic? All moot. Stuff kills. Whatever stuff King feels like. And Emilo’s gotta blow it all up before an abruptly happy ending. Again, it’s the dumbest film.

Anyway, the film is the Nashville of killer car movies. Countless people hide in a North Carolina truck stop, trying to ride out the chaos. Why not a cave without modern conveniences? Who knows. But King wanted to rock out.

In the ‘80s, horror films were either going the sonic route of the eerie synth wave (The Thing, A Nightmare on Elm Street, Friday the 13th) or of dread, doom, and gloom, with brass orchestrations like the ones lingering ever so slightly in the shadows of Bernard Herrmann’s Psycho score (Poltergeist, An American Werewolf in London). King chose a less conventional route, personally selecting AC/DC to compose a score and new music for this killer car calamity.

The lore here is terrific. King so badly wanted the band to do music for his movie that before filming began, he met them and sang “Ain’t No Fun Waiting Round to Be a Millionaire” from Dirty Deeds Done Dirt Cheap in its entirety. AC/DC dug King, thought he was a hoot, and they agreed to score. The music is built on repetitive bass rolls, with a layer of guitars on top, followed by a blast of “ree-ree” guitar screeches. It’s like a child of Jaws clad in black leather pants.

As jump-scare swells grow more common and embarrassing in film, AC/DC’s score once provided a proud format for that kind of sound. The way the band slinks back and forth, building their guitar-powered growls, actually exudes a sort of over-confidence that’s hard not to admire. It’s like, well, you ever get drunk and belt out “You Shook Me All Night Long”? It’s that same dirty pride that’s layered atop Maximum Overdrive. It helps turn the film into a primal, base-instinct sort of thing – like a movie for the Fangoria generation. It’s a slick, sick kind of Pavlovian euphoria.

Oh, the music’s ear-shattering and a bit laughably dated as well. But it’s sure as hell memorable. And the subsequent album, Who Made Who, featuring music from the movie and the eponymous title track, was a modest hit for AC/DC.

“If you want it done right, you have to do it yourself.”

King says that in the trailer, and it’s a deeply egomaniacal thing to say of your own film. With all due respect, of course. He also called it “a moron movie” later in his career and “the worst adaptation of his work.” Why he never made movies again. A little too self-deprecating, perhaps. But snoop around the IMDB trivia, and you’ll see glimmers of outlandish creativity. In addition to AC/DC scoring, King wanted Bruce Springsteen to star at one point. There were accidents on set (the cinematographer Armando Nannuzzi lost sight in one eye). And the movie was a flop. Universally panned, too. And yet, with King’s wacky ideas about cars, tactless direction, and big taste in music, Maximum Overdrive quietly endures thanks in no small part to its director’s loud ‘80s and AC/DC’s loud rock.