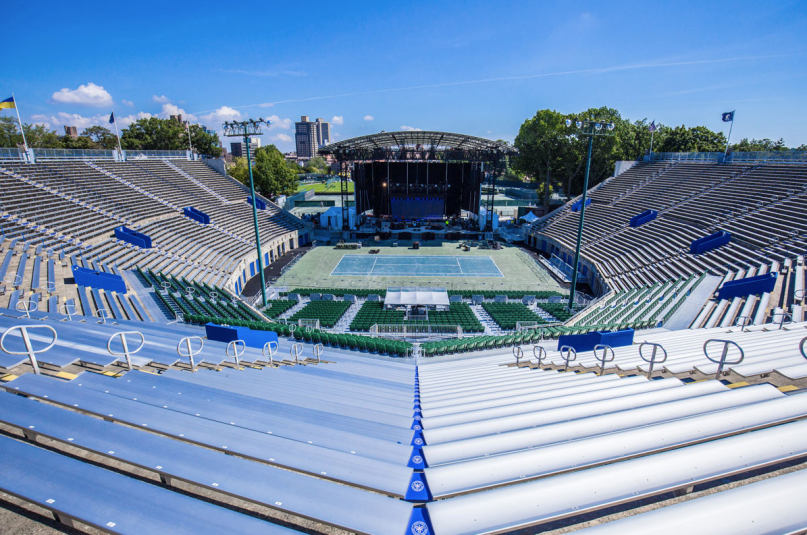 There are plenty of music venues throughout New York City, but one of the largest and newest is way up in Queens. 2013 saw Forest Hills Stadium, once the location of the US Open, reopened its doors to concerts for the first time since the 1980s. In the three years since, the venue has undergone numerous upgrades, and each refurbishment has come with a few surprises. For example, you might find yourself waiting for the bathroom and see a whole group of people walk into the porta-potty next to you, laughing and high-fiving as they seem to cram themselves into the little blue box.

Well, they’re probably not trying to cross the streams, and are instead going to grab a drink and a unique view of the show. That’s because one of the porta-potties inside Forest Hills Stadium actually hides a secret VIP bar. People who know people or special VIPs can get access to the unique speakeasy by pressing a 9-volt battery into a hidden lock. Inside they’ll have access to free booze, comfy couches, and an unmatched view of the stage.

“We thought it’d be funny if people standing in line for the [real] porta-potties suddenly saw 20 people come out of one, like a clown car,” show promoter Mike Luba of Madison House Presents told The New York Post. It’s probably just as funny when someone looking for the secret room opens the wrong blue door and finds a concertgoer relieving themselves, which apparently is a fairly frequent occurrence.

There are actually a handful of these hidden VIP lounges located all around the venue, most of them password-protected. There’s the Racoon Room, named for the family of raccoons discovered inside when it was first being renovated. There’s also the Sign Room, the spot where the US Open’s sign painter once worked (and potentially lived), and which is now stocked with alcohol and used as an aftershow part spot for performers.