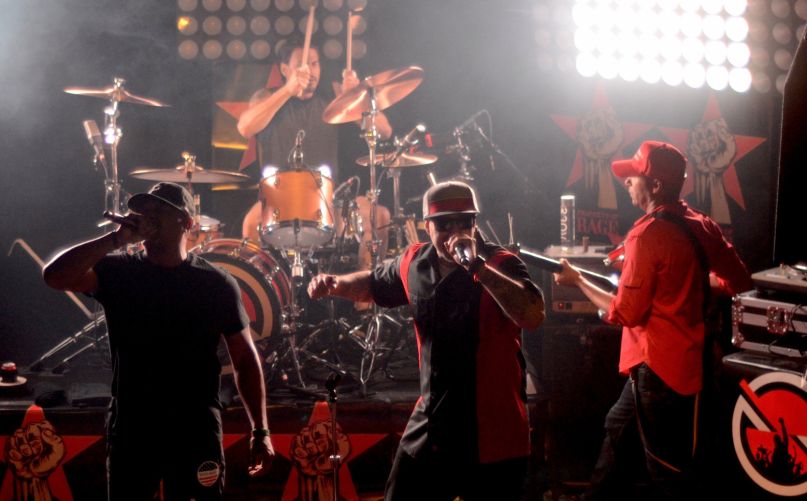 Jampaign is a monthly column in which Mandy Freebairn explores where music and politics collide in unique ways. This month, she discusses why Prophets of Rage are the protest band we need in 2016.

Next week, Cleveland will host the 2016 Republican National Convention, where delegates will presumably elect Donald Trump as the party’s official presidential nominee. A year ago, that sentence would have been reserved for satirical news shows and dystopian novels, but here we are, America. The chaos of this election has gone far beyond the standard scandal and ruthlessness that we expect from a presidential race. It’s enough to frustrate any voter, and indeed it has. Fear not, however, because newly minted supergroup Prophets of Rage know exactly where you should invest your anger. The band, which features members of Rage Against the Machine, Cypress Hill, and Public Enemy, have promised to protest the convention with performances both in the streets and at local venues.

Though they only joined forces this year, the members of Prophets of Rage are no strangers to activism. Rage Against the Machine have a long and complicated history of political engagement and protest, which includes two past visits to national party conventions. Back in 2000, they showed up to the Democratic National Convention to play a free concert in protest of America’s two-party system. In 2008, Minnesota riot police prevented the band from going onstage for a scheduled free concert during the Republican National Convention. As a response, band members took to the streets with megaphones and sang a cappella versions of their songs. Aside from his overtly political music with Public Enemy, Chuck D co-hosted Air America’s Unfiltered with Rachel Maddow, testified before congress on behalf of peer-to-peer MP3 sharing, and even co-wrote a book about race and music. In 2010, Cypress Hill canceled a concert in Arizona in protest of recently passed immigration laws.

It seems natural, then, that this supergroup of politically charged musicians would form during what may be the most polemical presidential election of the last 50 years. In an interview with Bloomberg Politics, Morello called for “an alternate voice” in politics, “one that’s unfiltered, uncompromising, and stands unapologetically with the people.” Making it clear that he does not see any of the current candidates as examples of this voice, Morello also told CNN Politics, “The system cannot be fixed by the system. One way to fight back is via culture.”

It’s an uncomfortable truth, but we seem to be increasingly reliant on cues from celebrities and pop culture when making political decisions. Actors are running for office, and politicians are hosting SNL. In a time where celebrity Instagram captions warrant news headlines, fame translates pretty easily into political power. By using that fame to openly critique the political process, Prophets of Rage are exposing the perverse nature of this system, causing us to reexamine our own political choices. By making America rage again, they demand that we question who and what our anger is supporting.

Anger has been a common theme in this year’s election, with Trump and Sanders acting as opposite pillars on the ideological rage spectrum, each proposing themselves as an alternative to the political artifice. The irony of this is not lost on Morello: “In this election year where I’ve heard so many commentators say that Donald Trump, Bernie Sanders are raging against the machine, the architects of the real Rage Against the Machine had to step up and say, ‘We’re gonna show you how to do it right.'” ‘Doing it right,’ in Morello’s view, is not making a choice between candidates who will most likely be unable to effect real change. Instead, Prophets of Rage are calling for ground-up political activism.

They might be dissatisfied with the current selection of presidential candidates, but don’t mistake the group’s message for anti-establishment nihilism. Prophets of Rage recognize the importance of music to political movements. Their single “The Party Is Over” is aimed at Donald Trump and hints at an overall dissatisfaction with the two-party system. But the band’s message doesn’t stop with the music itself. Some of the proceeds from the “Make America Rage Again” tour will go to shelters and food banks, and tickets for their shows are set at a modest $20. This is the kind of ground-up economic activism that Prophets of Rage are asking their audience to engage in. The band is challenging listeners to channel their frustration into something that will continue past Election Day.

This is not to say that music alone cannot work to political ends. In fact, music may be one of the best channels we have to disseminate information. The mass appeal of music is far more reliable than that of TV news, especially for those disillusioned by the media’s coverage of this election. Simply infusing music with a political statement can be powerful — the music of Rage Against the Machine and Public Enemy (and the generation of angry, informed people it inspired) is proof of this.

But this year demands more than anger. In a time where so much hangs in the electoral balance, it is not enough for music to simply be political in content; it must be political in practice, too. Prophets of Rage are doing more than providing an outlet for frustration over systemic problems; they are providing listeners with the tools to actually do something about it. And they’re not the only ones. Along with Morello, System of a Down’s Serj Tankian co-founded nonprofit Axis of Justice to involve musicians and fans in social justice. Morello will also join artists like Talib Kweli and Anti-Flag for a series of “Rock Against the TPP” concerts this summer to urge congress not to ratify the Trans-Pacific Partnership. It is this kind of direct action that we need right now. Musicians may not always have a responsibility to be political, but today, with so much on the line, they do. Musicians and fans alike should start raging again, and soon.