After two decades in the game, Ant and Slug sound confident and mature 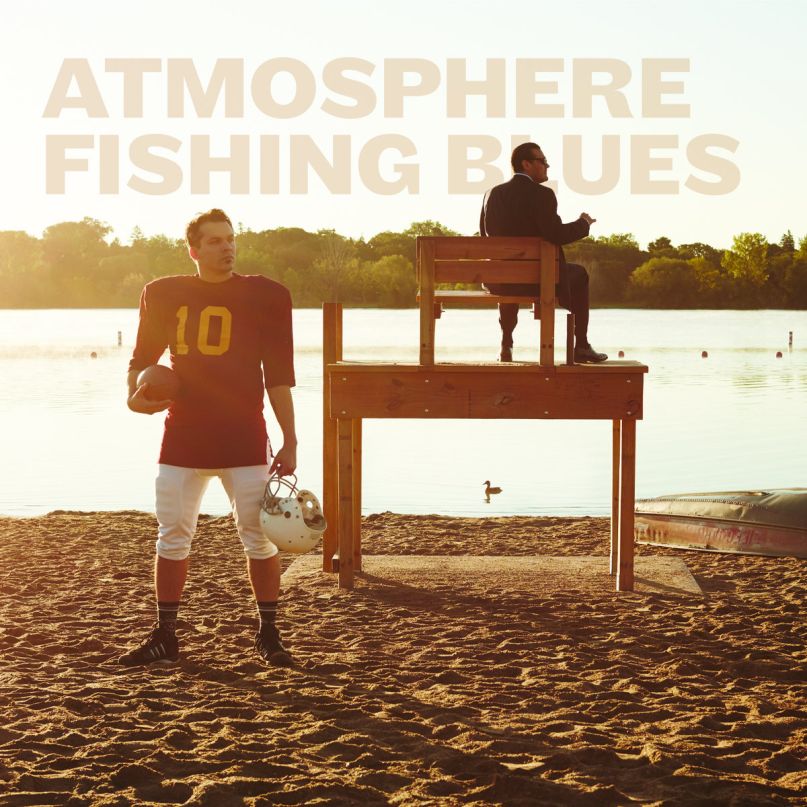 As Atmosphere, Sean “Slug” Daley and Anthony “Ant” Davis have been making music together for over 20 years, which is not only a testament to their longevity, but also an undeniable rarity in the indie hip-hop world. Based in Minneapolis, the group exploded onto the scene with 1997’s Overcast!, soared to notoriety with 2002’s God Loves Ugly, and have released album after album at a steady pace, now reaching a more complete sense of maturity on Fishing Blues, though still the same people at the core.

If lead single “Ringo” is any indication, Slug is well aware he’s getting older — and so are the rest of us. Over a boisterous beat, he talks about beer guts, passing out in airport bars, and throwing up in rental cars while the hook repeats: “Everybody wants to see a falling star.” It’s easy to speculate that the song is about himself, a rapper getting older and less lively, but in a recent interview with Minnesota Public Radio, Slug insisted that “Ringo” is not autobiographical, nor is it about any one person. If the song was written as a confessional tale of sorts, however, it wouldn’t be that far of a stretch.

At 43 years old, Slug has spent the past two decades on a pedestal as an indie hip-hop god. Coupled with the indisputable success of Rhymesayers Entertainment, the record label he co-founded, it’s not surprising he had an ego. But based on the lyrical content of Fishing Blues, he’s no longer the cocky 20-something, self-described “asshole” he once was. Aging has clearly given him the opportunity to become a new and improved version of himself. Consequently, Fishing Blues is a more mature variant of Atmosphere. The album addresses fishing in every sense of the word, fishing for compliments, validation, food, love, money, and everything in between.

Although at times he raps like a kindergarten teacher telling nursery rhymes to a room full of 5-year- olds, his innate ability to write highly personal, narrative lyrics has made Atmosphere so relatable. He easily conveys his imperfections while at the same time reminding the listener of his assets. This constant tug of war between ego and humility largely dominates the overall feel of Fishing Blues.

“I’ve been an asshole before it was fashionable/ And when it’s out of style/ I’ll be the last to know,” he drops on “Perfect”. He confesses that he’s “a feminist and also a misogynist,” taking the theme of duality and the flawed self to the forefront. It’s almost like he’s trying to relinquish his own ego, but preserve his integrity at the same time. “I should jump back and kiss myself/ But I’ve been learning how to resist myself,” he says on “Seismic Waves”, again illustrating his internal struggle to remain humble.

While the material on Fishing Blues consistently divulges his poignant revelations on middle age, sometimes it gets uncomfortable. For example, on “Next To You” he fantasizes about “fucking” someone and how he “can’t wait to get it in,” which evidently is where the misogyny comes in. Recent Rhymesayer signee deM atlaS sings the hook, a strange, brooding melody that plays upon an unsettling, somber tone. Fortunately, the carnal musings are brief, and Slug follows shortly with “When the Lights Go Out” featuring heavy hitters DOOM and Kool Keith. It’s a dark, menacing track that finds the trifecta of emcees effortlessly swapping verses like they’re trading baseball cards.

Fellow Rhymesayer Aesop Rock pops up on “Chasing New York”, an ode to Slug’s childhood fascination with hip-hop culture, but again, it’s from the #DadRap perspective he’s been Tweeting about. Elsewhere, the title track boasts a laid-back, jazzy boom-bap beat and contributions from The Grouch, while “Anybody That I’ve Known” ties everything together. “In the past I’d wish for something different from within my grasp/ Now I’ve grown/ I wouldn’t trade my world with anybody that I’ve known,” he sings, revealing his newfound contentment.

The 18-track effort ends with “A Long Hello”, which finds Slug speaking to an invisible someone, lamenting the fact there are “far too many breakup songs.” In what seems like a stab at a love ballad, he winds up, once again, admitting his own insecurities: “I’ll never be the best at this/ I write songs that I’m living in/ Welcome to my sweatshirt.” Along with Ant’s confident production work, there’s a sense Slug is finally comfortable with the man he’s become, what he’s accomplished and where he’s going — asshole or not.

Essential Tracks: “Fishing Blues”, “Perfect”, and “When the Lights Go Out”