De La Soul – and the Anonymous Nobody 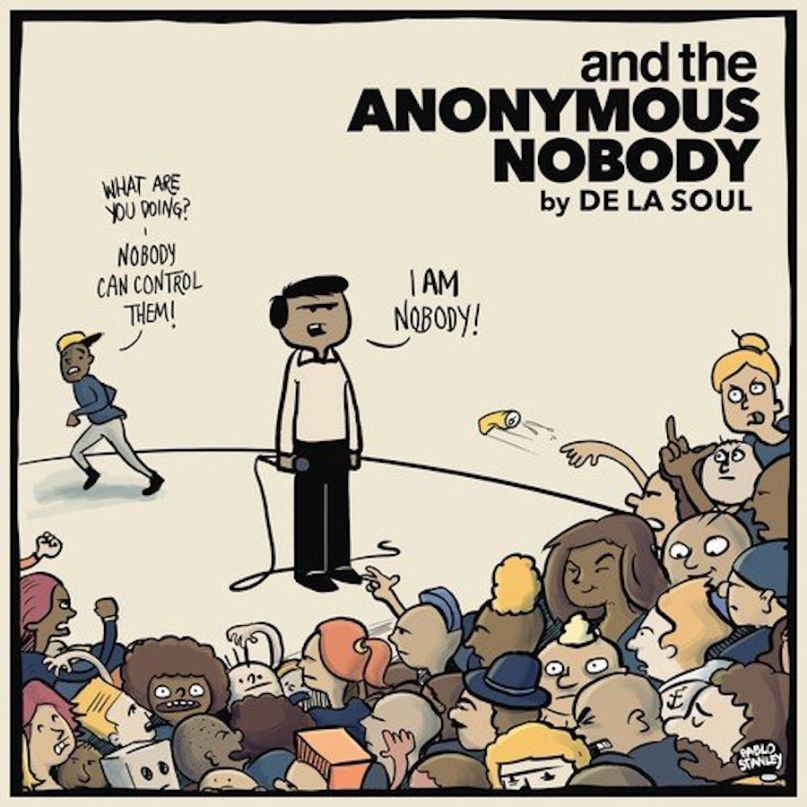 The wait is finally over. For De La Soul fans, especially those that have been there since the trio’s seminal album, 1989’s 3 Feet High and Rising, the news of De La Soul’s ninth studio album coming to fruition was like a dream come true. After raising over $600,000 through a Kickstarter campaign, they had more money to make an album than they’ve ever had before. The question is: Did it help or hinder?

In many ways, De La Soul’s long-awaited and the Anonymous Nobody is not really a De La Soul album. The classic trio take centerstage on their own on only five of the album’s 18 tracks. Granted, it was produced by the New Yorkers, but with over 10 features crowding the booth, the voices of Dave Jolicoeur, Kelvin “Posdnous” Mercer, and Vincent “Maseo” Mason often drown in the deluge. On “Drawn”, for example, Swedish dream pop group Little Dragon overpower, the vocal contributions from De La Soul confined to a 30-second window.

This pattern repeats throughout the album, but the more it recurs, the more vibrant the resulting collage becomes — bright and shiny in patches, though decidedly less than the sum of its parts. It’s almost necessary to compartmentalize each track, to listen in single-song bursts, in order to preserve the legacy of one of the most revered hip-hop groups of all time. Otherwise, Anonymous Nobody runs the risk of feeling like a train wreck. Collaborations ranging from 2 Chainz, Pete Rock, and Usher to Talking Heads’ David Byrne, Jill Scott and Gorillaz mastermind Damon Albarn create a sense of chaos. It works … until it doesn’t.

The Snoop Dogg-featuring “Pain” is the closest the record gets to prime De La Soul. The beat, vibes, and rhymes are flawless. “Property of Spitkicker.com” with Roc Marciano continues the roll down memory lane, but then the album hits a pebble, causing it to temporarily fly off the rails. “Lord Intended” (with Justin Hawkins of The Darkness) drags on for a painful seven minutes with wailing guitars and Hawkins repeating “Fuck everyone/ Fuck everything,” one of a handful of moments where you begin to question if you’re even listening to a De La Soul album.

Thankfully, there are moments of real brilliance peppered throughout the record. On its own, the David Byrne-featuring “Snoopies” unveils an unexpected and intriguing partnership, much like (and unlike) the match between De La Soul and 2 Chainz on “Whoodeeni”. The use of Usher on the hook of “Greyhounds” is equally unlikely, yet proves that not all surprises are pleasant. The track stands out like a sore thumb, much like the bizarre “Unfold”, a spoken word track included on the Kickstarter-supporter edition that should have been left on the cutting room floor.

It seems they saved the strongest tracks for the end. The orchestral feel of “Here In After” with Albarn and “Exodus (Outro)” are nothing short of captivating, the sound of three friends who grew up together reflecting on the lives and careers they’ve built. “It’s the years that we own/ And we earned them/ See the bridges we built or we burned them,” it begins, a clear indication that they’ve reached a point in life where humility is often at the forefront.

While and the Anonymous Nobody won’t resonate with everybody, it’s still a glimpse into who De La Soul are today, where they’ve been, and what they’ve learned. “Exodus” ends with the words, “Saviors? Heroes? Nah/ Just common contributors/ Hoping that what we create/ Inspires you to selflessly challenge and contribute/ Sincerely, anonymously, nobody,” a call to action urging others to follow their passions.

The album is bursting at the seams with high profile names, making it nearly impossible not to wonder if that’s where most of the money went. Having over a half a million dollars to make a record could have put undue pressure on the group, leaving them desperately seeking help that would somehow keep them “hip” after a long absence. But they’ve never needed that before, and fans surely were hoping for an update on where De La are today, just Pos, Dave, and Maseo in the studio, pouring their blood, sweat and tears into every note. But this one feels more crowded, more complicated. They spent over 200 hours recording with a host of Los Angeles musicians. While Anonymous Nobody is a brave departure from the sample-heavy triumphs in their past, at times it feels a bit too contrived, too far away from a De La Soul statement. Somehow the trio manages to continue to push the boundaries beyond what we could have ever imagined.