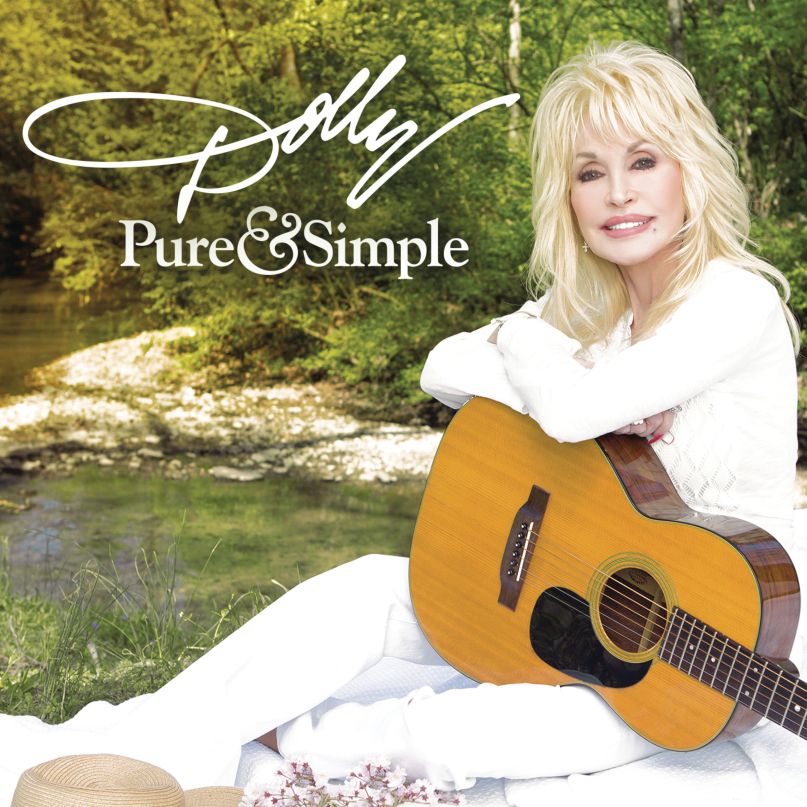 With over 40 studio albums to her name, Dolly Parton is one of the most celebrated musicians in country music. That said, her 43rd record, Pure & Simple, has a lot to live up to when stacked up against the hits. In order to do so, Pure & Simple definitely sticks to its title, though that’s not necessarily a good thing. The album discusses love, loss, and nostalgia, yet with a simple quality that often diminishes the emotion and intrigue of those weighty subjects. Simply put, Pure & Simple doesn’t measure up to the caliber of songwriting she’s shown elsewhere, eschewing Americana storytelling in favor of a rudimental formula and a formulaic approach.

The album’s stripped-down tracks utilize minimal instrumentation, primarily acoustic guitar, mandolin, and light percussion. A blend of reinterpretations and previously unreleased tracks, Pure & Simple was inspired by a tour with a similar minimalist approach. The title track opens with a twangy country backdrop, a straightforward, uncomplicated ballad. Parton proclaims her love: “I just love you pure and simple/ Pure and simple/ Sweet and fine.” Though the background is lovely, the lyrics here are mere pleasantries that don’t allow for much connection. Unlike ballads like “Jolene” and “My Tennessee Mountain Home”, there’s very little of the intimate imagery she’s so beloved for creating. The lyrics just aren’t memorable.

“Say Forever You’ll Be Mine” continues this theme, brimming with hollow clichés that forego Parton’s original appeal: “But the rain will go away/ There’s always a brighter day.” She continues with a spoken word segment that doesn’t quite feel sincere. The lyrics could apply to anyone and any situation. In attempting to promote unfettered production elements, the lyrics are far too simple, even mundane. The album’s two saving graces are the backing instrumentation and, perhaps most obviously, Parton’s voice. For someone who started singing during childhood and pushed her voice through 43 albums and countless performances, Parton’s vocal quality doesn’t sound compromised in the least.

Solace emerges during a three-song arc beginning with “Can’t Be That Wrong”, a somber ballad that recalls Parton’s ‘70s love songs (especially “As Soon As I Touched Him” and “Living on Memories of You”). Later, “Outside Your Door” showcases Parton’s voice at its strongest, with its vast vocal range and exquisite harmonies. Though the lyrics aren’t complex, the musical backdrop takes shape to compensate. “Tomorrow Is Forever” promotes the best of old-school country and Parton’s sincere songwriting.

However, Pure & Simple careens back to the course of contemporary country music with “I’m Sixteen”, a rhythmic tune punctuated by soft electric guitar and an attempt to whimsically capture youthful nostalgia. “It goes to show you’re never old/ Unless you choose to be,” Parton wails out with a burst of sentimentality. Unfortunately, the album lacks the clear thread of continuity that lines like that might suggest, bouncing from style to style aimlessly.

Though the beautiful musical elements connected to the record’s title would have been far more compelling had Parton infused the specificity and raw emotion of records like Jolene, The Bargain Store, and Hello, I’m Dolly. Though Pure & Simple will be palatable for her fans, it lacks the depth that put Parton in the spotlight to begin with. It lacks her exquisite similes, the stories flooded with imagery, and the identity of the American heartland.

Essential Tracks: “Can’t Be That Wrong”, “Outside Your Door”