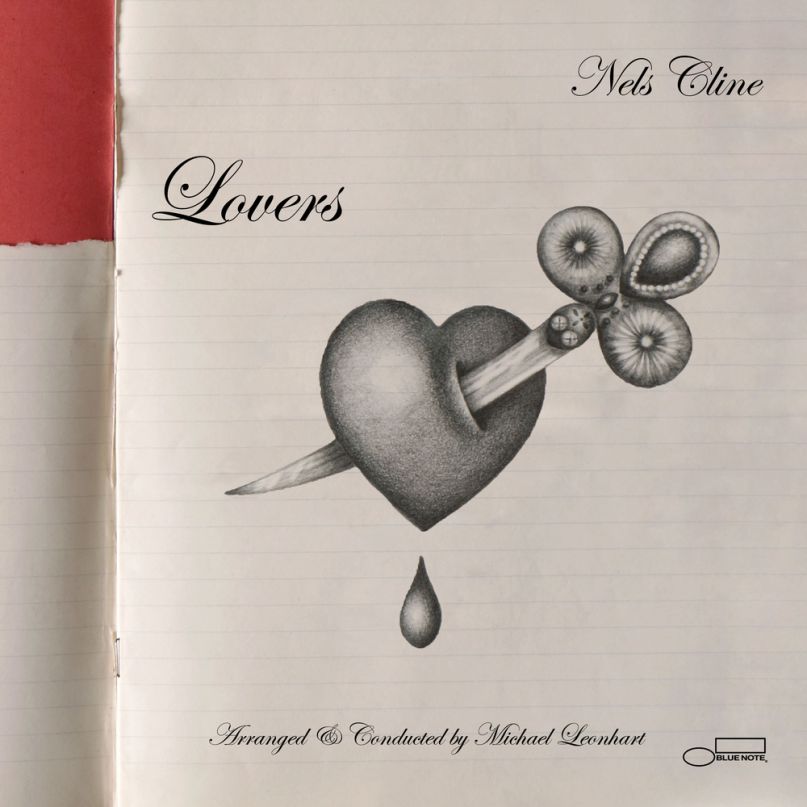 Lovers is, simultaneously, Nels Cline’s most ambitious and most straightforward project, which is saying something considering the discography the guitarist has amassed over the last four decades. Yet, even through the most seemingly milquetoast gigs like his steady work with indie icons Wilco and appearances on albums such as The Evening of My Best Day by folk songstress Rickie Lee Jones and the Blue Man Group’s 2003 LP The Complex, Cline adds an angularity and squiggly energy that elevates the material beyond its genre trappings. So, to hear him pluck out simple, fluid lines and play standards like “Glad To Be Unhappy” and “Invitation” with such clarity (not to mention being backed up by a large ensemble of brass and woodwind players) comes as a small surprise, but a decidedly welcome one.

Perhaps the biggest revelation on Lovers is hearing how that directness extends to Cline’s original compositions. The 60-year-old took the title of this album entirely to heart and in turn created some of the loveliest work of his career. “Hairpin & Hatbox” is a winsome shuffle where Cline’s glassy leads are matched handsomely by Kenny Wollesen’s vibraphone and the bleat of muted trumpets. “The Bed We Made” keeps an equally calm pace with the help of a string section dancing around the central melodic motif. The album closes with one of Cline’s most fragile creations, “The Bond”, a ballad dedicated to his wife, Cibo Matto’s Yuka Honda. The tune builds gradually from intertwining guitar lines to a full ensemble swirl and back again. If you haven’t been fully swept off your feet by the preceding 75 minutes of music, that final track will finish the job.

Cline does manage to get his avant garde licks in along the way. The dissonance of “So Hard It Hurts” and “Touching”, two Annette Peacock compositions that he and the band combine into one dizzying whole, features a droning middle section that slices cleanly through as it prepare for the song’s stately final minutes. Arto Lindsay and Peter Scherer’s “It Only Has To Happen Once” (found originally on the 1988 Ambitious Lovers album Greed) pops and groans through its samba-like groove as it slowly decomposes.

There’s also the willful perversity of some of his song choices. Cline winkingly connects the music from two wildly different Charlotte Rampling films — the post-World War II psychosexual drama The Night Porter and Max mon amour, in which Rampling’s character falls in love with a chimpanzee — into an emotionally taut whole. Cline and arranger Michael Leonhart bring the many versions of “Beautiful Love”, a song originally written for the Wayne King Orchestra in the ‘30s, to bear on their rendition that moves from a clarinet-rich waltz to a Kenny Burrell-like swinger.

The ambition of a work like Lovers could also prove to be its undoing. Clocking in at around 80 minutes and stretched over two discs, it’s asking a lot of even the most ardent Cline fans to absorb it in one big chunk — even more so when you take into account the album’s constant shift in temperament and tone. That the album is being released by Blue Note Records, one of the longest-running and most respected jazz imprints around, might bring some curious new listeners around, but how many of them will stick with the journey to its exquisite end?

What will hopefully keep them engaged is the unbelievable talent burned into each track. Cline has a deep contact list from his many years in the music world and so was able to put together a dumbfoundingly great band that features, among many others, his twin brother Alex on drums, bassist Devin Hoff, harpist Zeena Parkins (who adds an Alice Coltrane-like sweep to their take on Gabor Szabo’s “Lady Gabor”), fellow guitarist Julian Lage, and clarinet players Ben Goldberg and Doug Wieselman. Together they allow their leader to take his circuitous journey through the past 80 years of popular music and wander as far off the path as he sees fit. That Cline sticks pretty close to the template and melodies of his forebears makes those farther out moments feel even more daring and serves to remind us just how versatile and striving he continues to be.

Essential Tracks: “The Bed We Made”, “The Bond”, and “It Only Has To Happen Once”