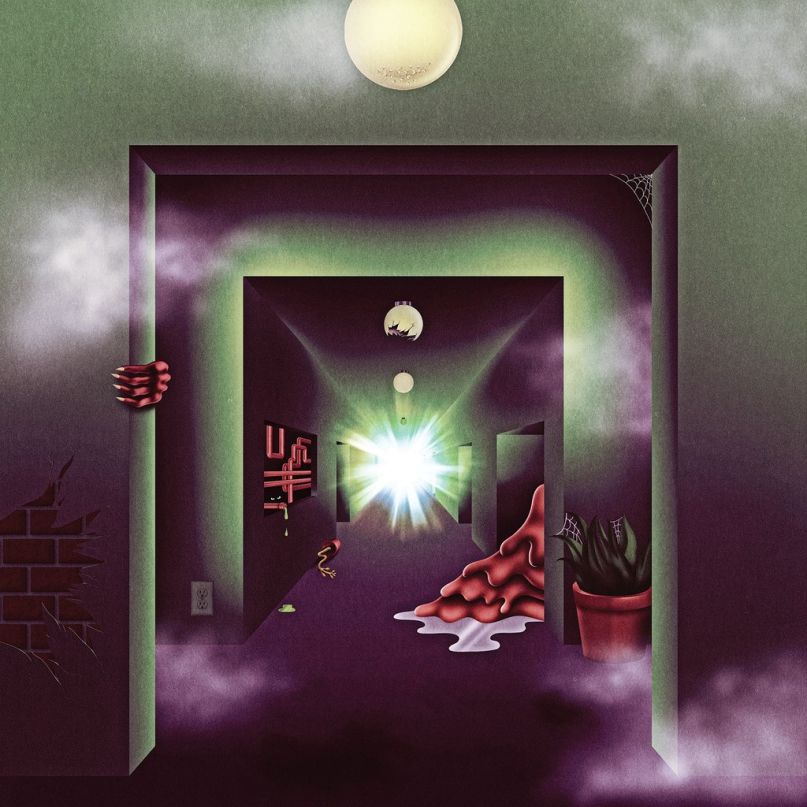 For a band that has changed lineups handfuls of times and released at least a record a year for 14 years, you pretty much know what to expect these days when you get a new album from Thee Oh Sees. That’s partially due to the almost oxymoronic centering presence that is manic guitarist/frontman John Dwyer; the guy started the project on his own and has been the only constant member. But just as importantly, we know what to expect because of the band’s near ceaseless touring. If their prolific recording schedule weren’t enough, Thee Oh Sees have one of the most jammed touring calendars around, and their records often chase the frenetic garage rock bliss of their live shows. With the improbably titled A Weird Exits, they continue that hot stream, another solid record of jams you’ve either already been or will be jamming to when they get the local concert hall all sweaty and boisterous.

The cover to A Weird Exits could have connections to The Shining, though the spooky, never-ending hallway here carries no pretensions of safety. There’s a claw creeping around a corner, fog, red sludge, broken walls. There’s always been a bit of menace to the sharp, droning garage grooves of Thee Oh Sees’ most raucous tunes, though the creature at the center of a labyrinth is typically revealed to be a Teen Wolf-style beast ready to jam out and thrash. Even the monsters in the song titles show their soft side: “Gelatinous Cube”, “Ticklish Warrior”.

This record gets a little extra party power and potential dark shading from the new lineup, drummers Ryan Moutinho and Dan Rincon (that’s right, two of them) and returning bassist Tim Hellman. Each Thee Oh Sees record seems guaranteed to have at least two or three absolute shredders, the songs that you can base a record or a moshable live set around. This new lineup seems designed to give Dwyer every opportunity to shred things to pieces. With the most solid foundation imaginable and absolutely nothing else to jam up his airspace, Dwyer gets to soar majestically. On opener “Dead Man’s Gun”, his guitar flares up with talons extended, his voice the rush of air that precedes the impact.
“Ticklish Warrior” makes good use of its beefy percussion and low end, a massively heavy tune that cruises on a no-nonsense bass line and four arms smashing at cymbals. The glitchy “Jammed Entrance” takes on a good deal of Stranger Things-esque horror nostalgia from Dwyer’s sawed-off synths, while “Gelatinous Cube” rams a stake straight into the heart with its breathless, wordless vocal hook.

The true test of a shred-fest garage rock record, though, often comes in exactly how the band handles the inevitable slow songs. The record is set up perfectly for repeat listens, as the (relatively) softer songs on A Weird Exits end the record as a breath of fresh air, getting you ready for the party to start all over again. The slowly chugging “Unwrap the Fiend Pt. 2” and the spacy and violin-fueled “Crawl Out from the Fall Out” are fine, but closer “The Axis” holds the rare place as a non-shredder that also happens to be one of the best tracks on a Thee Oh Sees record. The organ-soaked ‘70s psychedelic ballad leaves room for Dwyer to twirl out a charming guitar riff and an overdriven solo, but relies just as heavily on his vocals, here moody and elegiac in a way he rarely shows for this long, six minutes of swoon before the whole thing decays.

John Dwyer and Thee Oh Sees have produced yet another solid record in a long line of them, a record that will hold up to any amount of road testing and will continue to keep on thumping. There’s nothing in A Weird Exits that signals a massive change in the future of Thee Oh Sees, nor does it stand head and shoulders above their catalog. Instead it’s one of many great records they’ve produced and one that shows a refinement and strengthening in John Dwyer’s guitar and voice and one that will continue to fill mosh pits the world over.