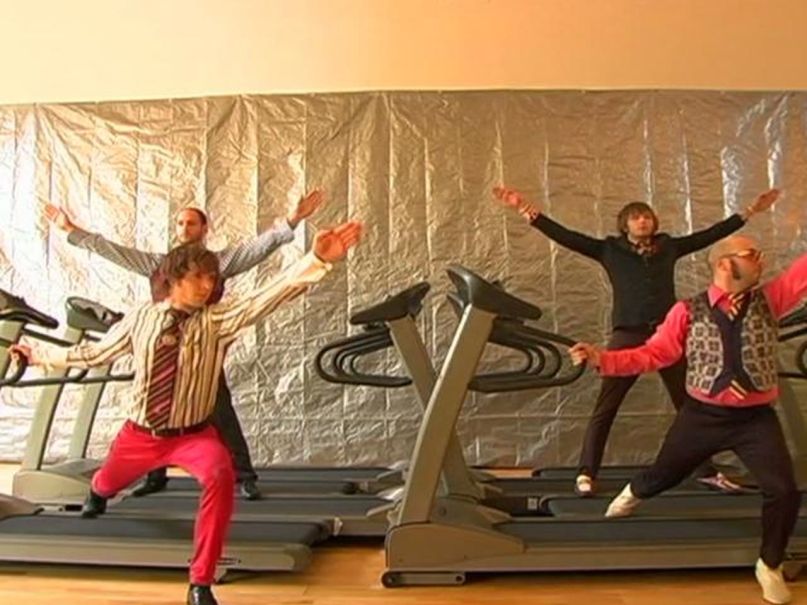 Before “breaking the internet” was a thing, OK Go broke the internet. Exactly 10 years ago, the band released their music video for “Here It Goes Again”, and the YouTube era officially dawned upon us. All it took was a few treadmills and some masterful choreography.

OK Go never sought to be a viral video band. As lead singer Damian Kulash explains, they were always most interested in “making things” and became who they are today by a “weird series of accidents.” He and bassist Tim Nordwind met as 11-year-olds at summer camp, bonding over a mutual sense of creative immediacy that carried over when they started the band.

“From the earliest days, a show was not only an opportunity to play our music but also an opportunity to make a poster,” Kulash says. “It was fun. All of the creative stuff that comes along with being in a band always felt like fun to us rather than a bunch of stuff that was somehow annoyingly plastered on top of the music.”

From the beginning, the band embraced theatrics that would permeate throughout their career. After recording a demo of “C-C-C-Cinnamon Lips” at a friend’s college, they were offered a chance to play on local Chicago public-access show Chica-Go-Go. It was the only song the band had at the time, but they quickly seized the opportunity. The only catch was that the show didn’t have the capacity for a live performance, meaning bands had to lip sync. While most of OK Go’s friends in other bands would “take the piss” out of the situation by replacing their guitars with brooms, they went with something a bit flashier.

“We were like, ‘You know what? If we’re gonna lip sync, lets just swing for the fences and do a full-on boy band dance,’” Kulash laughs. “So we spent the better part of a week making up this ludicrous dance routine in my apartment.”

Kulash was working at a local NPR affiliate at the time, so he recruited DJs Ira Glass, Gretchen Helfrich, Peter Sagal, and Gerome McDonald to be their “backing band” for the performance, miming their instruments while OK Go performed their elaborate dance. This would be the first in the “series of accidents” that would lead to the treadmills.

Years after the Chica-go-go performance, NPR invited OK Go to be their live backing as they took This American Life on tour. Between shows, Glass asked the band if they’d be interested in reprising their dance. The band debated if it was too lame before inevitably deciding go through with it. The dance was a major hit with the crowds, prompting them to make it the closer for their live sets.

After two years of touring behind their self-titled debut, they decided they wanted to keep something “ridiculous” to end their shows but didn’t want to rehash a song from the first record. They decided to make up a new dance for the song “A Million Ways” off of their sophomore album, Oh No. They enlisted the help of Kulash’s sister, Trish Sie, who was working as a professional ballroom dancer at the time. She spent a week with the band in Los Angeles rehearsing the routine. It was only ever intended to be performed live.

“This is where it gets really weird,” Kulash says. “A friend of ours knew somebody who works with Michel Gondry [director of Eternal Sunshine of the Spotless Mind]. He was a huge idol of ours at this point. And we heard, through the grapevine, that he had a new, awesome, hugely choreographed dance music video idea that he was going to make for some tiny rapper from Chicago who no one had ever heard of named Kanye something. And we were like, ‘Come on! We’re the dance band!’ So we just went in the backyard and practiced the dance and shot it on a video recorder.”

It was a video intended for an audience of one, hoping Gondry would watch, cast the young Yeezus aside, and work with OK Go instead. But after viewing the video, the band thought it was hilarious and sent it to a few of their friends — one of which uploaded the clip to a video hosting site called iFilm. A few weeks later, the band discovered that the video had been downloaded hundreds of thousands of times, more than the amount of copies they sold of their first record after insistent touring and radio pushes. They don’t believe Gondry ever saw it. But it planted a seed in the band.

“We were like, ‘Look, if we can do that by accident, then we should do it on purpose,’” Kulash says. “So I called my sister, and we tried to think up a new, more ridiculous dance. That’s when we came up with the treadmill idea.”

The plan was surprisingly sparse. They just figured they’d get eight treadmills in a room and then figure it out. As history has proven, it worked. They stowed themselves away in Sie’s Florida home for 10 days. They didn’t tell their label or their manager what they were doing for fear they’d shut it down, meaning they recorded the whole thing without a budget.

“I remember when we put up the tarp behind us, we were like, ‘It’s okay that it looks shitty. We don’t want anyone to mistake this for a real, high-budget music video,” Kulash says. Still, the band sat on the video for almost nine months with worries that it’d be too similar to the “A Million Ways” video. It eventually dropped when the band was playing a festival in Russia. Without their knowing, the label posted the video to StupidVideos.com, with the band’s guitar tech breaking the news to them.

“We were like, ‘Really?! What the fuck!’” Kulash recalls.

They decided to just go with it and asked the label to take it down and repost it to a new, up-and-coming site called YouTube. They’d anticipated getting the same 300,000 views they’d gotten on iFilm, maybe in a shorter time frame. Instead, it hit 900,000 views within a day.

“We honestly thought there was a decimal place wrong,” Kulash says. “It was like, holy shit. Obviously it blew up, and it was a big deal, and all of the sudden our label remembered our name and turned on the promotion machine and all that.”

The video would go on to become a pop culture phenomenon. They’d perform the treadmill dance on the MTV Video Music Awards and won a Grammy the next year for Best Short Form Music Video. It wasn’t the last the world would see of OK Go and certainly not the last video they’d make that would capture the imagination of the internet. They’d create an intricate Rube Goldberg Machine for their song “This Too Shall Pass”, choreograph a video with dogs and buckets for “White Knuckles”, and perform a routine on motorized unicycles for “I Won’t Let You Down”. The video for “Needing/Getting” required the band to personally tune 57 pianos, each string to the same single note, in a warehouse for three days.

“It’s like a runaway train, these videos,” Kulash says. “Most bands spend maybe two days on a video. It’s been a long time since we’ve only spent two months on one.”

They reached their pinnacle last February when they released the video for “Upside Down & Inside Out”, filmed on a plane in zero gravity. It’s something Kulash and the band had wanted to do for the past decade, their video drifting once again into spectacle. And that’s partly the point of these things.

“[We wanted people to] see it and know that it happened for real,” Kulash says of the treadmill video. “This is something that I’ve had to articulate to myself a lot more in the 10 years since. Because at that time, there was no question. Everybody basically knew what was real and what wasn’t. These days, computer graphics are so good that people frequently experience unbelievably wondrous things and have built up a pretty thick skin to it.”

This idea of creating wonder in their fans and viewers is key to the band’s continued video output. Kulash explains further.

“The movie Gravity is amazing, right? It is amazing to see, but that’s fucking impossible, right? If that was really real, think of how much more blown away you’d be,” Kulash says. “Now, it’s become increasingly hard to get people to not suspend their disbelief, to get people to look at something and realize it really happened. If what you’re going for is that sense of wonder, which is usually the baseline of our videos. If people shut off and go, ‘Oh, this is filmmaking, this is like trickery,’ your expectations change. Suddenly the film Gravity is just ‘cool.’ It’s not un-fucking-believable. It’s just cool.”

Even if OK Go never sought out to make crazy, unbelievable videos, the band hasn’t compromised who they were in the process. They’ve always wanted to make things. And, as Kulash puts it, there’s a precedent for crossover between art-forms in modern pop culture. It all comes down to what limitations and possibilities are available at any given time. Musicians up through the ‘80s were primarily limited to what they could do with a vinyl record. Kulash cites the Beatles putting a locked groove at the end of “Revolution 9” so that the song could play infinitely and the zipper on The Rolling Stones’ Sticky Fingers as ways artists were already crossing over their mediums into new territory. Now in the internet era, Kulash says that the “distinction between making something for your ears and making something for your eyes starts to get a little bit destabilized.

“We think of ourselves as musicians that do this one thing and fine artists do this other thing and film makers do this thing and journalists do that thing,” he says. “To me, most of that is defined by the mode of distribution. That will sound academic or pretentious, but I believe it to be true.”

The escalating stakes of their videos, jumping from dancing in the backyard to popping balloons in zero gravity, may give the impression that the band is constantly trying to outdo themselves. Kulash articulates that this isn’t necessarily the case.

“What we’re trying to make is the coolest thing we can create at that time and with that song and that idea,” he says. “Just like writing songs, you’re not trying to outdo your last song, you’re just trying to write a new song. New world, new universe, new set of emotions. They’re not in competition with each other.”

While they may not be competing against themselves, the band still want to challenge themselves. Kulash says that he can’t imagine that they’d do another dance video, just because they’ve already done that. They’re constantly seeking out new challenges in terms of logistics and difficulty (though he says he can’t imagine doing anything as difficult as the zero gravity video).

After all these videos and defying physics, “Here It Goes Again” still resonates the most 10 years later. It set a precedent for what the band would become, defying artistic constructs and challenging themselves musically and visually. But it’s not just for the band that the video resonates. It’s become a permanent fixture in pop culture.

“A lot of people don’t know OK Go, but almost everybody if I’m like, ‘You know, we made this video on treadmills,’ they’re like, ‘Oh my God you’re the treadmill guys!’” Kulash says. “So we will for the rest of time be the treadmill guys, but that’s not a bad problem to have.”