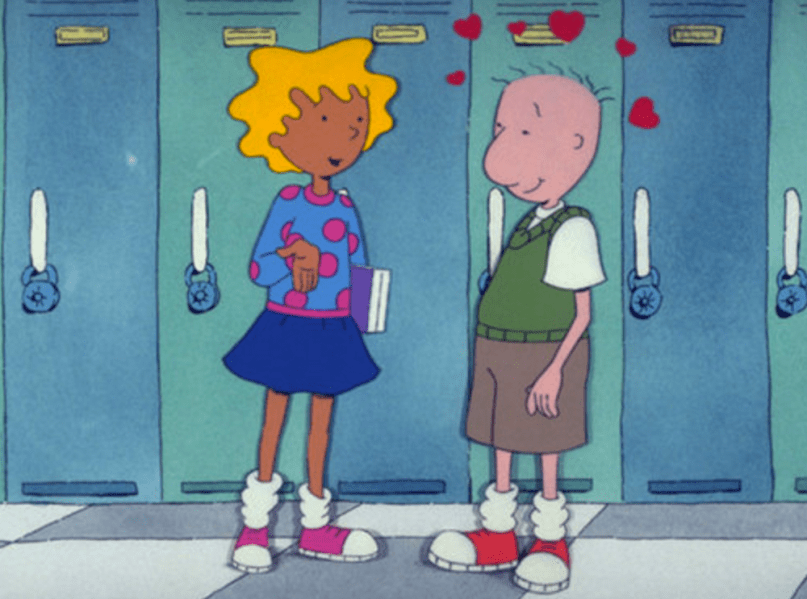 Doug aired its last episode in 1999, leaving Nickelodeon fanatics with a little less Funnie in their lives. Not only that, but the finale left viewers who’d followed the show since its premiere in 1991 wondering … does Doug ever get the girl?

While a bevy of cartoons from that era have been given the reboot treatment, Disney, Doug’s rights-holder at the moment, hasn’t really been open to reviving the series, which means all the burning questions regarding the titular character and longtime crush Patti Mayonnaise won’t be answered onscreen any time soon.

Still, that hasn’t stopped Doug’s creator, Jim Jinkins, from speculating on the show’s various characters some 15 years later. Jinkins had long based the series on his own life, and his latest drafts — he’s prepared should a Doug remake come calling — continue to read like an autobiography. It’s Doug’s 10-year reunion and he’s living in a city as a freelancer, he tells EW.com. Skeeter is his roommate, theatrical sister Judy is performing off-Broadway, and Porkchop is alive and well. (What about The Beets!?)

As for Patti, Jinkins envisions she and Doug reconnect in much the same way he did with his past sweetheart:

“It’s my ten-year reunion, and I didn’t go. I was in New York working like crazy as a freelancer and just trying to make it there. And I got a phone call in New York and it’s Patti. The real Patti. And my heart’s beating fast. She’s like, ‘I was at the reunion! You weren’t!’ and I was like, ‘Yeah…sorry…I had to work.’ And she goes, ‘I found out you live in New York. Guess what—I do, too!’ And she told me where she lives. We lived across Central Park from each other. And she says, ‘Why don’t you come over for dinner?’

So now we’re in a Doug show. I’m like, what do I wear? What will she look like!? All that’s happening as I’m walking across Central Park to her apartment, just wondering and just hoping, all those things. I was, at the time, very available.

I get to the door, and you get buzzed up in New York, and so I walk up to the apartment and I hear the lock turn—it’s getting ready to happen—and she opens the door, and she’s perfect. Just perfect. She just looks spectacular and she’s so happy, and her arms fly up and we hug, and I’m just like [frightened guttural gasping noises]. She backs up and she goes ‘Look, Jimmy! Boobs! I got my boobs!’ [Laughs.] It sounds like I’m making this up, right? And I’m like, ‘Yeah… yeah, uh huh!’ ‘Yeah, they always used to call me Flatty Patti, but look!’ And she was just funny and fun and innocent, but it’s like Doug and Patti together again, ten years later, right?

So this is all wonderful, right? And then she wheels and goes, ‘Oh, Jimmy, I want you to meet my husband.’”

Which is to say that Doug and Patti don’t end up together in the end. “It doesn’t happen because, really, most people don’t end up with their first love,” Jinkins says. And that’s the sound of a million millennial hearts breaking.

Jinkins, however, is considering another love story for Doug: After much pondering, he realizes that, all along, he’s been in love with that one female friend that’s always listened to him blab on about Patti. Total romcom moment.

Below, revisit Doug’s song to Patti.