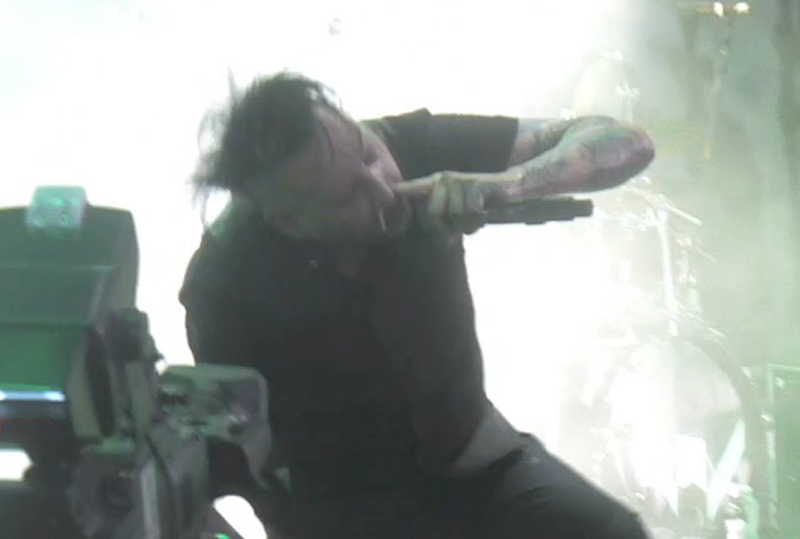 Marilyn Manson is currently out on the road as part of a co-headlining tour with Slipknot. However, as reports from his shows have rolled in over the last few days, it looks like he might have been better staying home. The concerts have become increasingly strange and painful to watch, with Manson staggering and mumbling across the stage more like a drunken metal fan doing karaoke than the king of Shock Rock. And at a show in Virginia last week, things took a turn for the icky.

Clearly unwell, Manson was reportedly blowing his nose vigorously all evening. At one point, he actually hooked a giant snot rocket onto his finger and launched it into the crowd. It’d an incident he apparently repeated in Camden, NJ, with the booger landing smack on a fan’s shirt. Rock N Roll Experience (via Ultimate Guitar) has images of the VA mucus missile, but fair warning: these pictures are not for the easily grossed out.

Amazingly, this was a relatively tame night for Manson as of late. During a July 10th show in Hershey, Pennsylvania, a slurring Manson incoherently groaned into his mic instead of singing while he stumbled through the venue towards the sound booth, where he messed with the boards and knocked off a monitor. (Any musicians knows you never fuck with the sound engineer.)

His performance of “Dope Show” was particularly uncomfortable, with the rocker cleaning the floor during one point and yelling at a tech to fix a cord so he didn’t “fall onto my dick.” He also told someone in the crowd not to “give me that uppity look because you’re not black,” before angrily tossing his microphone aside.

Even Manson’s recent announcement of his new album, Say10, was a bit hard to watch. He canceled a concert on July 21st in Quebec “due to illness,” but it certainly doesn’t look like he’s gotten better yet. Hopefully he does soon, though fans might want to keep an eye out for future cancelations. And perhaps hospital visits.