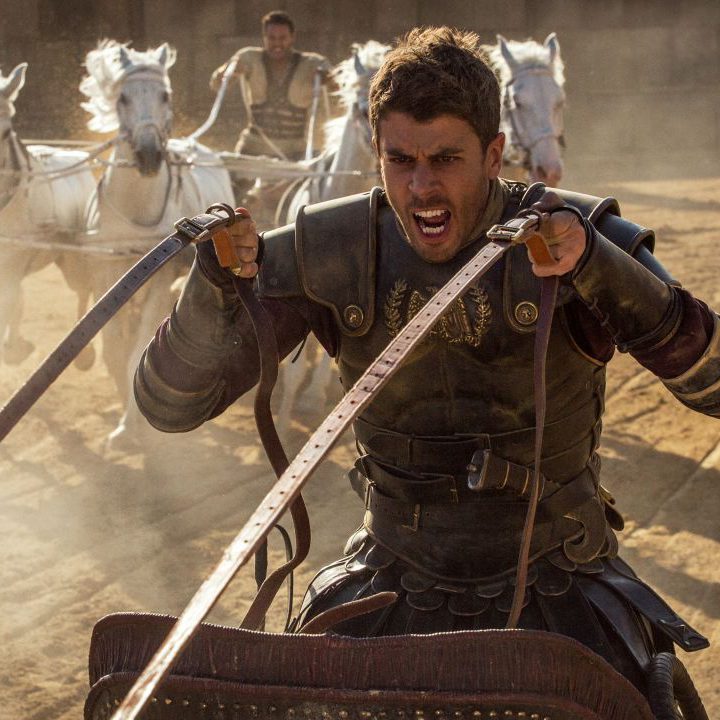 Welcome back, Judah Ben-Hur! Son of Ithamar. Prince of the Judea family. Enslaved crew master and chariot enthusiast for the ages. Scion and star of your own biblical epic, Ben-Hur. It’s been a long time, old friend. The worlds of cinema and Bible stories have changed since you were last seen in theaters. Cameras are no longer full of celluloid, nor are they reliant on 70mm lenses. You’re going to be captured with the shakiest digital boxes. Your boats and chariots no longer require a carpenter’s craftsmanship, but instead, outsourced programmers to manifest them. And only the handsomest young actors shall play you; no shimmering Baby Boomers here. And this time, your story will feel less Biblical and more badass. Sacreligious? Just know this: Judah, you’ll pop a wheelie when you race. It’s corny, and more than a little absurd, but kind of spectacular in its way.

This is a Ben-Hur for 2016. The classic tale of redemption may feel modernized, but make no mistake, this is a new testament to a classic story’s longevity.

Judah Ben-Hur is played by Jack Huston (Hail, Caesar!). He’s privileged, but kind. Obnoxiously eager, yet a pleasure to be around. (He enunciates in that serious, whispery “old actor” way with hints of King’s English.) Ben-Hur is a pacifist, but this quality is antagonized by his adopted brother, Messala Severus (Toby Kebbell, building a legacy as an actor comfortable with conceited villainy). Messala enlists in the Roman army, under a blunt moral code: “death or peace.”

And so begins a fall-out for the ages. While Messala ascends the ranks, Ben-Hur is accused of sedition and sent to the galleys, where he reinvents himself as a chariot racer through luck, struggle, and the fortune and compassion of others. Will brother forgive brother? Will Messala’s heartless killing give way to greater missions, like compassion? Will Ben-Hur be forced to endure sweat, blood, and betrayal, not just to showcase Huston’s star potential, but to teach of impossible hope as well? Will the “Tale of the Christ” deviate all that greatly from versions of Lew Wallace’s novel told before? To that last question, at least: not really.

Pretend for one second that ­Ben-Hur, the 1959 Best Picture winner, never existed. Within its own confines, Timur Bekmambetov’s adaptation is a gritty sword-and-sandal actioner in the modern parlance. Ben-Hur is a decent man scorned, whose faith is tested, and is defined by incredible occurrences. He meets interesting characters, like a dreadlocked old man named Ilderim (Morgan Freeman, in full period regalia, even narrating occasionally), and an intense carpenter who goes by the name of Jesus (Rodrigo Santoro). Ben-Hur survives both minor and outrageous perils. His adventures on the high seas are brutal, and his salvation is a riveting depiction of fate. And the chariot race, as primal as the desire to see it may be, delivers in grand B-movie fashion. This is a solid riches-to-rags-to-metaphorical-riches story. That’s a great arc right there, and it has some of the requisite thrills one might hope for.

Gone are the epic luminosity, the pious gaze, and even the homoerotic tensions of William Wyler. Bekmambetov, the mind behind such excessive actioners as Wanted and Abraham Lincoln Vampire Hunter, comes to Ben-Hur with his trademark fire. The coverage is all about zooms, Steadicam, and an affinity for flecks of grit, whether sand or snow or dirt. The film is shot with a shaken, almost Greengrass-like video game aesthetic. This Ben-Hur is closer to an ‘80s actioner about two men who once loved each other parting ways, only to reunite and settle their differences through vicious means.

Now, that loose attitude comes at a price. The original novel is loved for its sanctity, grandeur, and richness. Those traits die in a hail of modern augmentation. 3D horse racing is treated far more favorably than soliloquy. And there’s always room for cutaways to gratuitous violence, as with Messala in battle, or even Ben-Hur cauterizing a wound with a hot knife. Bekmambetov never meets a shot of PG-13-testing brutality he doesn’t like. Wallace’s novel could be grim, sure, but did the book luxuriate in totally sick shots of bodies getting mowed over by chariots? You tell me; it’s been a while since parochial school.

But at least Bekmambetov has the nerve to at least go all-in with a take that could be called tacky, but also enjoyable in its way. Yes, the modern ardor for digital action scenes is present, but they’re often well-crafted, committed, and dare we say, entertaining. After ten minutes of extreme chariot racing, the aforementioned wheelie arrives as a cherry on top. And take the way in which Bekmambetov stages Ben-Hur’s boat trip, complete with whippings, hot oil, flames, splint debris, and the occasional oar whacking. It’s intense, horrifying, and delivered in the style of a great, trashy, low-budget production sparing no expense to show off the nasty bits. This Ben-Hur feels more at home with Liam Neeson thrillers, or European-produced romps like Lou Ferrigno’s Hercules, or the 1981 Clash of the Titans. In the spirit of Bekmambetov’s reimagining, this Ben-Hur gets results with a chariot the way Rocky would with fists, or Dirty Harry a gun.