Stephen Frears' true-life comedy is light and familiar, but anchored by memorable performances 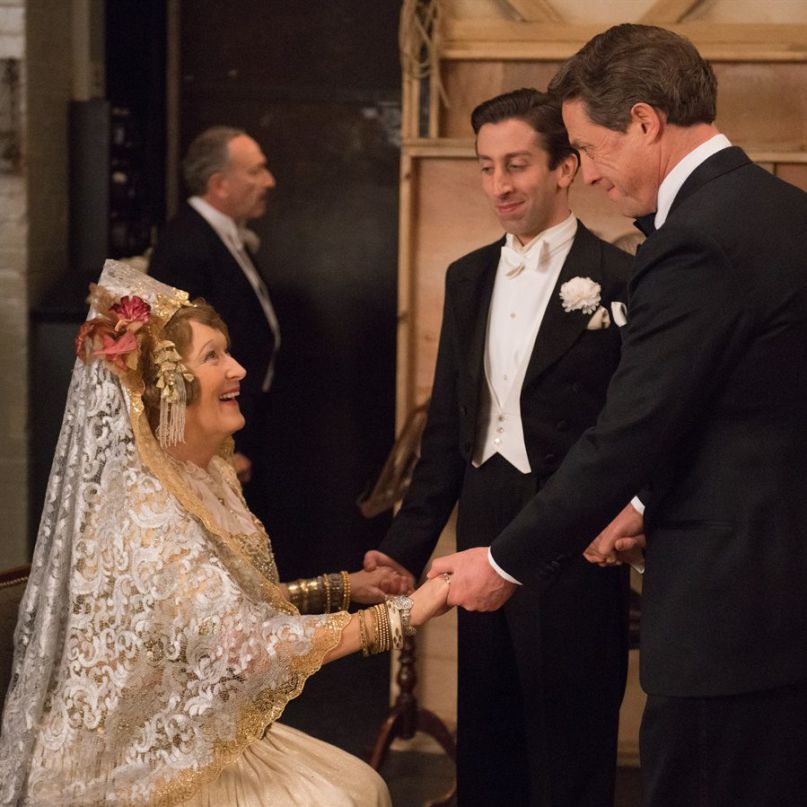 It’s been a summer of explosions, reboots, remakes, debatably necessary sequels, heroes no one likes, and loads of disappointment and frustration — and that’s before we get to all the shit happening in the real world. Summer’s traditionally a time of big-budget escapist fare, and while there have been occasional moments of fun, 2016’s crop of movies has often let us down, right when we needed them most.

Well, dim the lights, raise the curtain, and enter Florence Foster Jenkins, stage left. Stephen Frears’ gentle, affectionate film isn’t going to change the world, though it functions as more than just a dismissible piece of fluff. But for those sick to death of bullshit, it’s just what the doctor ordered — a warm, thoughtful, and often moving comedy anchored by a trio of stellar performances and a hell of a story.

The story is of the “based on a true” variety, focusing on a year in the life of the titular heroine, played with predictable but remarkable aplomb by one of the world’s finest living actors. Florence (Meryl Streep) lives the life of a wealthy society matron, making her mark on World War II-era New York by acting as one of the city’s foremost patrons of the music world. She’s aided in this pursuit by three key elements. The first is, of course, stacks and stacks of cold hard cash. The second is her devoted husband, “eminent actor and monologuist” St. Clair Bayfield (Hugh Grant). The third, and most important, element: her unshakeable, bone-deep love for music.

That’s where the wicket gets sticky, because Florence, a former child piano prodigy whose career was ended by an illness that damaged her left hand, is no longer content to merely sit on the sidelines. After being inspired by a concert given by soprano Lily Pons (played briefly but memorably by Russian soprano Aida Garifullina), Madame Florence reignites her singing career. But as both the audience and pianist Comsé McMoon (Simon Helberg) discover, the lady really, really can’t sing.

The movie may center on a woman whose passion far outpaces her talent, but its lifeblood comes from three actors who have skill and talent to spare. Grant has never been better. His Bayfield defies easy categorization, equal parts cad and devoted husband, slimy enabler and fierce defender. Frears and screenwriter Nicholas Martin wisely let these contradictions flourish, refusing to spoon-feed answers about Bayfield’s motivations, and thus with every ambiguous moment, Grant’s performance deepens.

In nearly any other film, that would be the big story — great but underappreciated actor makes good — but Helberg is a much bigger surprise. Here’s a sentence both deliciously implausible and totally true: Meryl Streep nearly has her own movie stolen from her by a cast member from The Big Bang Theory. As McMoon, Helberg is a total delight, calling on his terrific comic timing, some serious musical chops — he does all his own playing, and there’s quite a lot of it — and a surprisingly deep well of softness and empathy. The relationship between Bayfield and Florence may be the film’s most important, but the scene that packs the single biggest emotional wallop rests in Helberg’s hands, as his left hand joins Florence’s right at the keyboard, allowing the former pianist to briefly revisit the instrument with which she first fell so deeply in love. Between that moment and his bizarrely infectious giggle, Helberg damn near walks away with the whole film.

But this is La Streep we’re talking about, and she shall not be denied. For accomplished singers (Streep among them), singing badly is a difficult thing to do, but you’d never know it from this film. Florence’s first song is a comedic triumph, a moment made all the funnier by Frears and Martin’s insistence on making us wait, then letting us witness the song through Cosmé’s terrified eyes. Streep wisely makes the choice to focus on the physical and mental efforts the song requires, and dammit, Florence tries her heart out. Frankly, it defies description. It’s transcendentally bad, which means it’s transcendentally good.

A comedic tour de force from Streep is a fine thing, but there’s more to her performance, of course. As with Grant’s Bayfield, Florence is a study in contradictions, and there’s no one better suited that Streep to such a task. While the film treats the character with great affection, no pretense is made in hiding her flaws: she’s courageous but foolish, sweet but selfish, generous but incredibly vain, sincere in her devotion to music but bizarrely deluded about her own abilities. From one minute to the next, Streep shows us a hero, a tyrant, a gentle soul, an asshole. She’s terrible, laughable, and both Streep and the film know that to be true. But at the same time, it’s a story and performance that command affection. Go ahead and laugh, they say, but don’t you dare deny that you love her.

This willingness to let contradictions thrive in a movie that would seem, on the surface, to be a paint-by-numbers biopic rescues Florence Foster Jenkins from that which would make it run-of-the-mill. Still, it’s hard to ignore the fact that straying even further from these conventions could only serve the film. Much of what’s here feels a bit small for such a big story, and save for a few elegant moments, it feels like the movie could have easily skipped past theaters and gone straight to HBO. Frears indulges in sweeping shots of 1944 New York on only rare occasions, and little attention is paid to the production design — the exception being Consolata Boyle’s sumptuous (and often funny) costumes. Its subject proves a hell of a lot more ambitious than the film in which she lives

The writing, too, holds Florence Foster Jenkins back a bit. Martin’s screenplay touches perhaps too lightly on some of the story’s more compelling elements, particularly on Florence’s lifelong struggle with syphilis (caught, as she tells a doctor, on her wedding night) and what effect it may or may not have had on her mental stability, and thus, on her seemingly foolish drive to sing without any skill. The performances are exemplary, but the film somewhat less so. It’s not bad, by any stretch, and there are moments as good as any this year, but don’t shortlist Florence Foster Jenkins in your Oscar prediction lists just yet.

Go ahead and write Streep’s name down, though. If there’s any justice in the world, we’ll be talking about Grant and Helberg for the next few months as well. Still, the film’s truest star is its subject, a rare treat in a world in which biopics are often simply an excuse for an actor to trot out a great impression, maybe wear some prosthetics, and show up in the spring to pick up their awards. Both Streep and Florence are inimitable, and thus a worthy pair. Long before the film reaches its beautiful, heartbreaking final line, the truth becomes wildly clear: Florence Foster Jenkins may not be good, but she sure is wonderful.