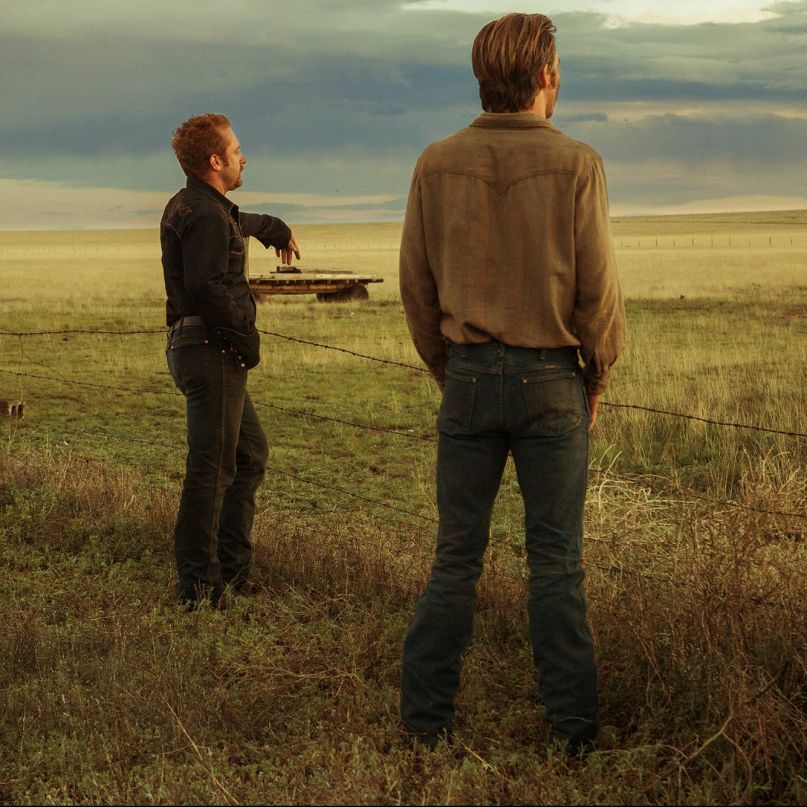 “Right now the only thing you’re guilty of is being stupid,” a poor bank secretary says in the opening moments of Hell or High Water, and she’s right. Brothers Toby (Chris Pine) and Tanner (Ben Foster) Howard haven’t crossed the line yet, this being the first bank on their spree of robberies — for them, there’s still an exit. But, like nearly everything that unfolds in this searing, sun-scorched heist flick, the duo’s crimes have an air of inevitability about them, the sense that their sad ending has already been foretold. The wheels of destiny are in motion, and under the tight direction of David Mackenzie (Starred Up), they turn fast.

Credit also belongs to screenwriter Taylor Sheridan who, as with his breakout Sicario, benefits from a fist-first, no-nonsense approach that allows character and stakes to flow organically from the action, rather than the other way around. There’s no prologue here, no flashy character introductions or struggles with conscience; instead, we’re thrust straightaway into the duo’s first job. And though the hotheaded Tanner is clearly the seasoned criminal here, it’s the soft-eyed, soft-spoken Toby who planned these heists.

His plan is desperate, but sound: They go in early, they steal from the drawers, where the bills are unmarked. They clean the money through casinos. They take their time. Now, the money isn’t for them; it’s meant to save the family ranch, which is on the verge of being foreclosed upon by the very banks they’re robbing. Factor in the recent discovery that the ranch is swimming in oil, and you have a motive and a crime both positively rich in irony. They’re robbing from the banks they feel have robbed them, only to secure land that will make Toby (and his children, his true raison d’etre) far richer than he’d ever get robbing banks.

Tanner, a black sheep who’s been locked up for the last decade, doesn’t care about the money. He’s simply along for the ride, offering an act of brotherly love in exchange for one final thrill ride. See, Tanner likes crime and chaos, but he likes guns most of all, and as the Hyde to Toby’s Jekyll he’s able to indulge in a bit of it all. That proves a touch problematic for the more even-keeled Toby, who doesn’t care if he’s caught so long as the jobs are done right. And with grizzled, near-retired lawman Marcus Hamilton (Jeff Bridges, as delightfully sloppy as he is sharp) on their tail, there’s a good chance they will be caught.

What follows is a rich, complex drama that’s as much about consequence and justification as it is destiny. For Tanner, it’s easy. Crime’s the only thing that ever gave him meaning. It’s tougher for Toby, who has to compromise his values for his dreams. And Hamilton? He’s sacrificed his life for his career, and with retirement approaching he’s terrified of what an existence without the law looks like.

None of this becomes too heady, however, nor do the relationships ever feel forced. There’s a restraint at work in Sheridan’s script, which more often than not values plot over pathos. That said, one of Hell or High Water’s greatest strengths is the way it builds its sweaty East Texas milieu through unexpected details, whether that be the exasperated drawl of a tough-as-nails waitress or the image of farmers shepherding cows across a highway as brush burns wildly in the distance.

Hell Or High Water is also surprisingly funny. There’s a touch of the Coens to the film, not just in its empathetic view of low-level criminals, but also in its ability to mine genuine laughs from both the local culture and, perhaps more importantly, the real-life practicalities and surprises that come with executing a robbery or surviving a gunfight. Bridges especially seems to be having a blast, chewing each of the script’s seemingly endless litany of endearingly un-PC insults like a wad of tar.

Foster is equally entertaining, and even hints at sociopathy with a combination of playfulness and menace that deftly skirts any trace of genuine emotion. Pine is also good, soulful and confident when it matters. He seems to struggle, however, with mining his character’s intrinsic melancholy; too often, Nick Cave and Warren Ellis’ threadbare, string-heavy score seems to do the heavy lifting in manifesting Toby’s inner conflict.

That said, the original music is wonderful. It has much in common with Fargo’s score, actually, which makes sense in that both scores conjure a creeping sense of dread through music that highlights the isolation of their respective worlds. And isolation feels key to Hell Or High Water — not only does its setting feel a million miles from the rest of the world, but so do its characters, all of whom seem to have sacrificed whatever part of themselves once possessed the ability to connect. Their ending may feel foretold, but it’s one you’re gonna want to see.