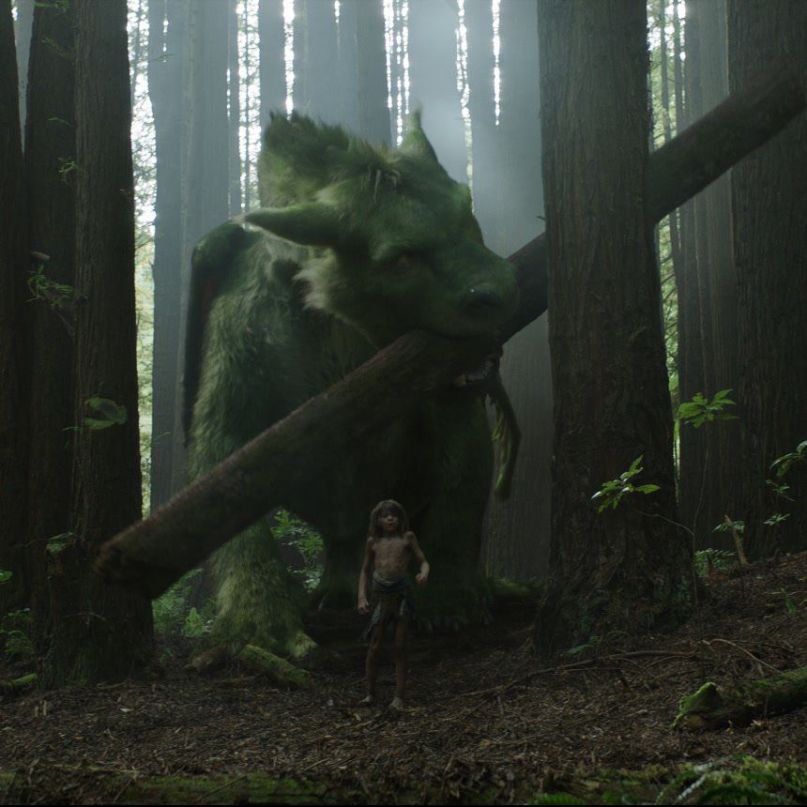 Pete’s Dragon likely felt weird when it arrived in 1977. Its Don Bluth animation and effects look antiquated (and cheap), and it felt like the last legs of the ‘60s hokum that the studio was already phasing out. It wasn’t the kind of human/illustration hybrid that impressed the masses like Mary Poppins, or Gene Kelly and Jerry the Mouse in Anchors Aweigh. With its sing-alongs, Snidely Whiplash villainy, and random acts of Mickey Rooney, the tale of a pink mop-topped lizard landed less impressively, but rather agreeably with audiences. But sure enough, you can’t keep an IP down forever. And now Pete’s Dragon is back and an outlier yet again – but in the best way possible.

David Lowery’s new spin on Pete’s Dragon is a delight, a film greater than it needs to be. The film soars, not necessarily to new heights, but perches high and mighty all the same. Here’s a family film that doesn’t pander to audiences, but invites them to enjoy themselves, believe in some magic, and even be moved. Here be dragon. A smiling one, filled with fun and fancy free as Walt used to call it.

Pete’s Dragon is about a wild child and his antics with a fanciful dragon, but the beats and mood couldn’t be more different from the original. This new film is a little more visionary, a little less given to pratfalls, and better off for both.

A four-year old named Pete (Levi Alexander), through the worst possible circumstances, must survive alone in the woods. (Parents, be warned – the opening is a heartbreaker.) By way of the very best kind of luck, Pete is saved and subsequently adopted by an enormous, shaggy dragon. The dragon is like an approachable Great Dane, and extraordinarily affectionate. Pete names the winged wonder Elliot.

Six years later, the two are pals, living off the land in a forest resembling the Pacific Northwest in the early ‘80s. They play hide and seek, read books together, and go into the woods likes kids might have done before, you know, the internet. Their life is pure Ranger Rick. Pete lifts whole trees like a dog would sticks, and Pete howls at the sky because it just seems right atop a mighty oak. Oakes Fegley plays the 10-year-old Pete, and he’s a young actor of considerable heart and mind. He feels natural: anxious when seen, proud with his dragon. And it’s all the more impressive given how well he emotes against a green creature played by a green screen on the day of filming.

When Pete is displaced after being discovered, the story kicks in as a sort of “find one’s way home” variety pack and parable. Pete is taken on by a small family, and must confront the challenges of being re-integrated into civilized society (i.e. a place with many more things in it than Elliot). And Elliot is left alone to defend his forest from loggers, grappling with loneliness and other worries. The two race to reunite, and stay safe around people and places they don’t understand, but under what new terms?

Pete and Elliot learn of a world, of families, beyond themselves. They square off against loggers, and test their bond as nature friends. And they convey a story about uncommon friendship and love and emotion. While not much ostensibly happens (the plot is minimal, even a touch predictable), the movie is so captivating that it really starts to feel like modest magic. This is an adventurous yarn in the best spirit of Disney.

Lowery, the Sundance vet behind Ain’t Them Bodies Saints, directs the $60 million movie with patience, care, and a twinkle in his eye. He lets his actors emote, and never demeans them with cheap family movie tricks. Robert Redford is an old-timer and believer in the dragon who avoids the character type’s ageism, and is a sturdy storyteller. Bryce Dallas-Howard, as the park ranger who discovers Pete, is instinctively warm and good at her job. Lowery’s staging of effects, especially with Elliot, is thoughtful. He focuses on the best and most important details; when Elliot and Pete play in a river, some shots are so long and wide that little things like water splashing and Elliot’s puppy-like behavior can be appreciated. And he keeps everything moving at a brisk pace. You feel Lowery’s considered appreciation for the nobler tendencies of Disney films. The exaggerated expression of eyes. The careful use of scary ideas and moments. The awe and determination in the characters. And maybe that’s why Pete’s Dragon feels so special, or possibly out of time, in 2016.

There’s been a noticeable fixation on ‘70s and ‘80s youth nostalgia in modern pop culture of late. You’ve seen it. Super 8’s altar to Spielberg. Argo’s end credits with Star Wars action figures on display. The very being and Carpenter/King obsessions of Stranger Things. It’s the perpetuation of stuff that youth of a certain age like, and it’s big right now for numerous reasons. For one, it’s marketable. Familiarity sells, hence our current barrage of sequels, franchises, homages, and so on. Pete’s Dragon might suggest that at first glance. But to a more cerebral end, this “era baiting” is comforting, recongizable, and often quite satisfying. And Pete’s Dragon is a great arbiter for the art of used ideas and old things.

Lowery’s new take on Pete’s Dragon embraces a certain kind of vintage, willing and able to believe in far-fetched magic. No video cameras, no VCRs, no Snapchat. It’s just a tall tale about a boy and his best friend, a fuzzy green dragon. Lowery taps into something kind, soft, and often understated. There’s pleasure in seeing Elliot caress his best friend by a fire in a cave. There’s amusement in seeing a logger (played by a grumpy Karl Urban) have his rifle bent by an unseen Elliot. There’s no attitude from the child actors, but instead a sense of astonishment and sincerity. The way Lowery observes Pete and Elliot’s relationship with nominal dialogue is beautiful. While it’s easy to deride the remake as commercially conceived, the film still feels as rare as the dragon it depicts, wholesome and heartfelt.

It should be noted that Pete’s Dragon is being released in 3D. Do not see Pete’s Dragon in 3D. The greetings-card forestry and dusk-darkened trees shot by Bojan Bozelli are obscured and left harder to appreciate with 3D glasses. (At an early screening, it was hard to read license plates close to the camera, because of this dimming effect.) Save the upcharge, see it in crisp digital projection, and use the pocket money for ice cream or dragon food after the movie.