Lazy, irresponsible, unfunny, and, somehow, not a satire 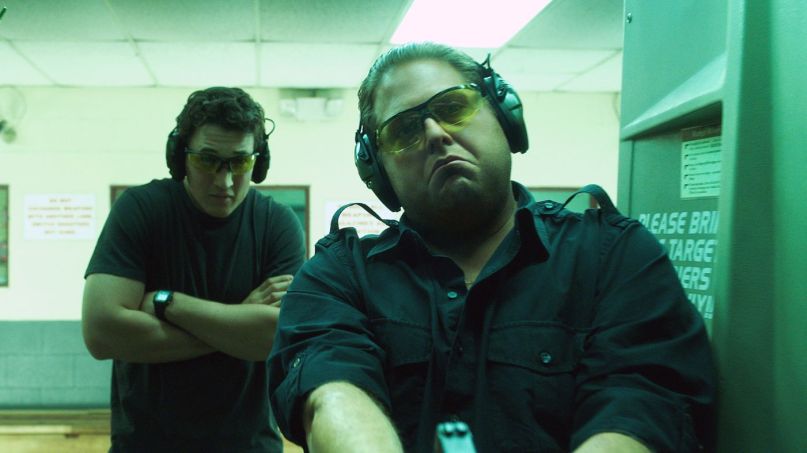 War Dogs is a “rags”-to-riches story about two white dude-bro arms dealers who lie, cheat, and steal their way into U.S. Military contracts. It’s vacuous, ugly, unfunny, and, somehow, not a satire. It might be the worst movie of the year.

Miles Teller stars as David Packouz, a Miami massage therapist who goes to work for his childhood friend Efraim Diveroli (Jonah Hill) after finding out his girlfriend, Iz (Ana de Armas, doing nothing with a criminally underwritten role), is pregnant. Efraim’s business is guns; basically, he nabs up the tiny U.S. Military weapons contracts that no one else wants. Being such a small operation, even the smallest of contracts yield big profits for our protagonists. After some early jobs prove lucrative, the duo nabs a 300 million dollar deal to arm the Afghan Military with the help of Henry Girard (Bradley Cooper, doing a solid for his pals), a shady colleague who may or may not be a legit terrorist. Securing that deal, however, is a piece of cake compared to actually pulling it off.

Sounds great on paper, yeah? It’s based on true events, too, which Rolling Stone writer Guy Lawson detailed in his 2011 piece “Arms and the Dudes.” It can’t be stressed enough, however, how wrong director Todd Phillips (The Hangover trilogy) is for this material. As a filmmaker, Phillips revels in the bad behavior of privileged white shitheads, and while that’s fine and good in low-stakes fare like Old School, it starts to feel irresponsible in a film that hinges on complex moral issues surrounding guns, the Middle East, and white collar crime—one astoundingly tone-deaf reveal during the film’s final moments, delivered with forehead-slapping somberness, is bound to infuriate anyone who sees a racial bias in the judicial system. Truly, all one’s likely to get out of War Dogs is how totally rad Phillips finds white collar crime, casual misogyny, and AK-47s.

The film’s sunny approach to corporate crime and its self-narrated rise/fall narrative owes a lot to Martin Scorsese’s The Wolf of Wall Street, but War Dogs is Pop Scorsese, a pale imitation that fails to ever justify its indulgent reliance on voiceover, freeze frames, and flash forwards. Even worse are the title cards that pop up between scenes, each bearing a forthcoming quote that’s likely supposed to encapsulate themes but instead weaves a hilariously unearned air of pretension throughout. There’s also a severe mishandling of character here; some critics accused Scorsese of the same with Wolf, but the key to that film’s subtle satire was the its refusal to give us an honorable protagonist. In War Dogs, Phillips rewrites history to paint Packouz as the gold-hearted family man, an interpretation that never once feels remotely honest.

You can blame Teller for that, too. His David is lifeless, lacking a single moment of charisma or spontaneity. Hill, who has quietly grown into one of Hollywood’s most reliable character actors, is also a disappointment. He plays Efraim on autopilot, never tapping into the relatable shagginess that makes his excitability so infectious onscreen. The script does them no favors, either. It’s filled with genuinely poor writing, from the clunky exposition to the rough draft dialogue to its use of “remember when” stories as a means of character building.

The thing is, so much of what’s wrong with War Dogs might have worked had the film grasped its story’s innate satire, as Adam McKay was able to do when he applied his comedic approach to complex current events in last year’s The Big Short. Phillips has no such nuance, though; the marketing flails at it by tossing around phrases like “the American dream,” but none of that is present in the film aside from an emphasis on billowing American flags and multiple Scarface posters. And that’s an interesting detail, as Scarface has come to signify an outdated, toxically masculine view of success in the modern age, especially when it’s used in satire. But War Dogs is not a satire. War Dogs is a Scarface poster, faded and ripped after years spent slumming it on dormitory walls.