Putting the Past Away: A Conversation with Okkervil River’s Will Sheff 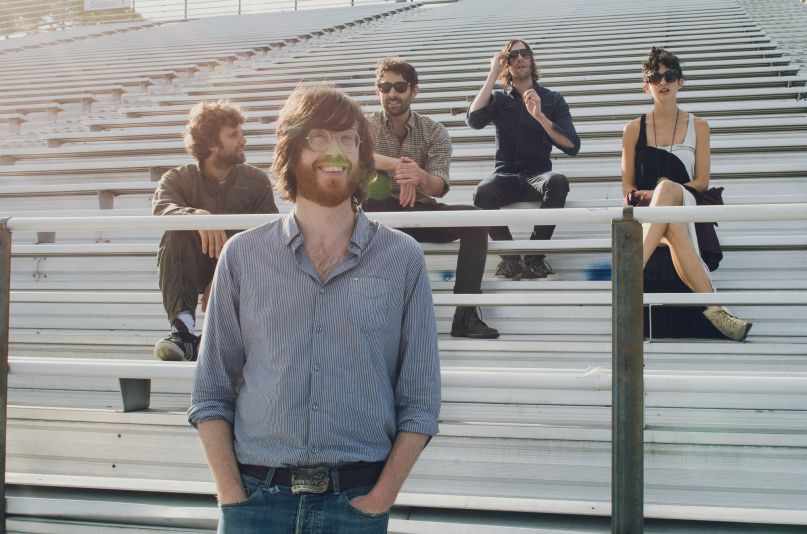 Before talking to Will Sheff — the one-man brain trust and only consistent member of Okkervil River — I already can’t wait to ask him about the artwork for his band’s eighth album, Away. Artist William Schaff has been just as integral to each record as the music itself, majestically depicting characters in the middle of some sort of personal breakthrough on each release. Sometimes, it has involved animals taking on humanistic behaviors: the kraken transmogrifying into a man on Down the River of Golden Dreams; the ovine protagonist sitting down for a solemn banquet on Black Sheep Boy; the bird-headed giant building Sheff’s hometown of Meriden, New Hampshire, on 2013’s The Silver Gymnasium. Other times, the art has involved humans more directly. On The Stage Names, a hand reaches out of water with the sun bursting behind it. On that LP’s follow-up, The Stand-Ins, it was revealed that the hand belonged to a drunken skeleton.

Regardless of who (or what) is on the cover, each image focuses on a dramatic transformation, and Away’s artwork is no different. As the sun sets in a sky tinged with amethyst, various avian species — many of which are now extinct — fly about in different directions, some of them retreating to the forest and some of them moving beyond it.

When I ask Sheff how all of this ties into Away’s themes and what kind of conversations he had with Schaff this time around, he informs me that the painting isn’t actually Schaff’s at all.

“Will did the title treatment,” he explains, referring to the typography of the band and album name on the front. “But the painting is by a 77-year-old artist named Tom Uttech.”

Switching up the cover artist may not seem like that big a deal, but for Okkervil River — a band whose music and lyrics have been unified by one person’s visual aesthetic since the beginning — it’s huge. The gravity isn’t lost on Sheff.

“Will [Schaff] was a tough one because we’re dear friends and we love each other and we work very closely together. But I felt like the album cover’s a face to your work. [And] it wasn’t going to have the same face.”

He’s talking about the recent upheaval of Okkervil River. With the announcement of Away came an almost brand-new lineup, along with death-of-a-band song titles like “Okkervil River R.I.P.” and “Frontman in Heaven”. But a new supporting cast isn’t all that’s different for Sheff, who’s dealt with a number of personal struggles since releasing The Silver Gymnasium. In addition to separating from his former bandmates (whom he still speaks highly of), he lost his grandfather and idol, T. Holmes “Bud” Moore. He wrote much of The Silver Gymnasium above the garage of his grandparents’ house, and there’s a song on Away, “Comes Indiana Through the Smoke”, that’s completely about Moore. Punctuated by the actual trumpet the man played in real life, the song has a gentle lull that imagines Moore’s death as a return to the battleship he served on in World War II. Couple all of that with the video for “Okkervil River R.I.P.”, in which Sheff literally gets buried alive, and it’s clear that, like any of the figures in William Schaff’s paintings, Sheff has undergone his own kind of metamorphosis.

Many musicians have found themselves on this loss-as-rebirth path before, and one can read all about that in Away’s press release. But talking to Okkervil River’s (still very much alive) frontman, he’s more interested in discussing how his songwriting has changed rather than the life circumstances that have led to those changes. A big topic that comes up is the pronounced shift from the last record to this one. For anyone unfamiliar with The Silver Gymnasium, it’s a frequently bright concept album about Sheff’s time spent growing up in Meriden. Steeped in nostalgia, it owes much of its tone to ’80s synths, New England folklore, and movies like The Last Starfighter. It sounds, at least on its surface, a lot happier than Away — not to mention previous albums such as Black Sheep Boy and the intentionally violent I Am Very Far — so much that Sheff fully gave in to its fond view of the past by creating a short film and even an 8-bit video game inspired by its magical-realist environment. But looking back, he believes the content actually came from a darker place.

“The Silver Gymnasium seems like a million years ago to me now,” he reflects. “And I love that record. But I’ve also started to see how much of what I was doing was about externalizing, [about] pushing my artistic ambition out into the world. I had a deep, sad, mournful nostalgia for a time in my life. I knew that it was ridiculous to be nostalgic like this, and I knew that it was morbid, almost. But it was hurting me. So I wanted to really exorcise it, to really get down into the heart of where it was coming from and why I was feeling it and purge it all. I was almost creating a record as a form of catharsis.”

He also sees The Silver Gymnasium as being symptomatic of society’s obsession with nostalgia as a whole, something that’s even more apparent now than it was when the album was released.

“Everything is some revival of some trivial property,” he laments. “We get really, really worked up about some new remake of something like it’s really important. I think maybe a lot of the time that’s a signal of how frightened we are of our contemporary moment. We’re trying to retreat into the things that gave us pleasure as little children, because being an adult and being an empathetic person in this world right now and looking all around you and seeing all the pain and ugliness and grotesqueness and danger … it’s very, very frightening. I got to a point where nostalgia was no longer torturing me or obsessing me. It was just a fun, little stuffed animal in the corner instead of this giant monster that was threatening to tear me limb from limb. And then I was sort of like, ‘What next and what now?'”

In that sense, Away is the inverse of The Silver Gymnasium, simply by being more concerned with living in the moment. Unlike previous Okkervil River releases, the instrumentation is, in a word, inconsistent. Jazz would be far too weighted a term, but there is a sense of constant mutation, of strings, brass, and woodwinds that venture down sonic rabbit holes where the destination isn’t always in sight. And yet the musicality never sounds frightened or panicked by its lack of direction. The players just accept it. The lyrics also refuse to deliver a linear narrative, most notably on the freewheeling second track, “Call Yourself Renee”.

“It has characters in it,” admits Sheff. “There’s kind of a girl me and there’s kind of a boy me. And neither of them are really actually me. And I could also tell you exactly who they are. But I also can’t tell you who they are. So there’s a dissolving of the self and the characters into some kind of acid. They’re all flowing together, and when I see that result in my work, it makes me really happy.”

Sheff hopes that this new approach will address a deeper problem that can come with writing about nostalgia: a lack of empathy. That’s not to say the next Transformers film or the recently announced Starman remake are cruel, apathetic pieces of art. But their fixation on the past makes it harder to provide genuine comfort in the present. Sheff’s more interested in producing work that, in his words, “sensitizes the listener.”

What does that mean, exactly?

“A song that aims to sensitize the listener could sensitize her to, for example, the moment she’s in when she hears it: a breeze in the air, the wind in tree branches, light hitting the sidewalk a certain way,” he says. “A piece of music has the ability to take you out of your head — [out of] spinning with stress and anxiety and self-consciousness and self-hatred — and just put you in the moment, either alone or at a concert with a whole group of people. But empathy is also contained within the idea of sensitizing people. A song like John Prine’s ‘Hello in There’, for example, does a beautiful job of making you really feel the loneliness and resignation of an elderly person who is ignored by everybody. And Prine doesn’t do that by wagging a finger at us and singing, ‘We should pay attention to elderly people/ That’s a value our society needs to work on/ La la la.’ He does it in an artful, emotional way that makes you trust him, so you’re more sensitive to the story he’s telling.”

Even though we never do get around to discussing if Away’s art specifically ties to this idea of taking the listener on a hyper-sensory journey, it seems that it very much does. Just look at everything that’s available to the eye: the scorched trees to the right, the more fruitful ones to the left, the presentation of both escape and shelter, depending on how you look at it. Is that smoke from a dowsed forest fire or just an evening fog? Whatever the case, it’s gorgeous to look at — a statement that, while simple, is also in line with Sheff’s more tangible artistic goals for his most recent work.

“In the past,” he remembers, “maybe I had a little bit different ambition. Maybe that ambition had to do with harsh or cerebral ideas. These days, I want to be able to give people something that’s nourishing. You can go to the show and have had a shitty day, and you forget about your shitty day and you forget about your worries and feel like you’re one with everyone around you for just a teeny, tiny little second.”