New York-based trio heads to Morocco and beyond for inspiration 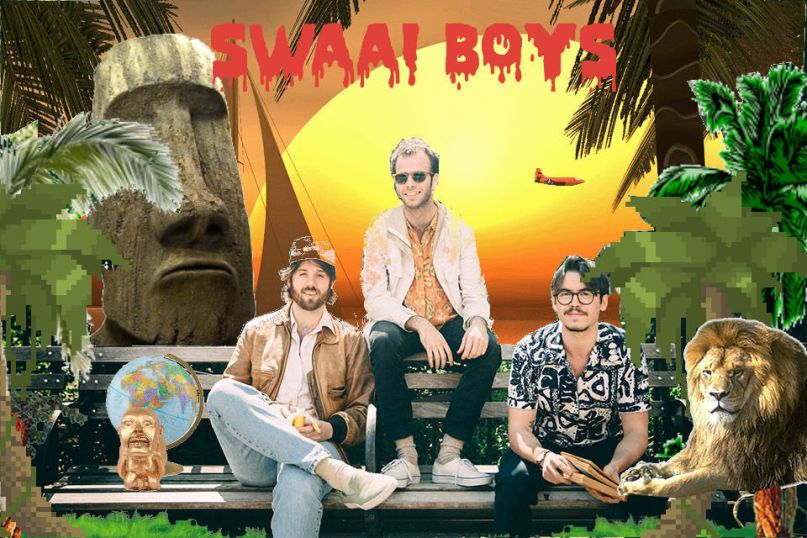 While some bands merely imitate the sounds of faraway lands — island locales, shoreside destinations, pastoral countrysides — New York-based outfit Swaai Boys actually travel to and record their natural noises. That desire to understand unfamiliar territories is actually built into their DNA, as they are part of the renowned Explorers Club, a collective that counts Neil Armstrong and Jane Goodall as members.

Many of those sounds appear on the band’s upcoming project, titled Hot Sand, culled from field recordings taken across Morocco and South African game reserves. Lead single “Dana of Dendur” is the ideal introduction, its sun-baked yet breezy arrangements bending to incorporate genres from home (jangly indie rock/pop) with more local offerings (think Tinariwen, the nomadic blues rock collective of the Sahara Desert). Swaai Boys dub their material “bazaar rock”, which is a nifty description that suits them just fine.

Read the lengthy, but fascinating full story behind the song:

“Dana of Dendur” is based on a love story from our percussionist Helmut’s youth. The Temple of Dendur is an intact Egyptian temple housed in the Sackler Wing of the Metropolitan Museum of Art, where a highschool girlfriend of Helmut’s had a summer internship. Her name was Dana. Helmet said she was tasked with categorizing hundreds of shabtis in the galleries near the temple — these Egyptian blue funerary figures — which was apparently very boring and lonely.

We were having a few mai tais on the museum’s roof garden one summer afternoon when Helmut told us about the affair, how he used to meet her at the end of her shift. They would cut the lines, sneak into the temple, throw pennies in the water, and make out under the palms.

Often they would stay there til after the museum closed, alone in this giant room lit only by the temple. They would wander the wing looking at Queen Nefertiti’s jewelry and crumbling pharaoh sarcophaguses. One time Dana said she knew hieroglyphs, and tried to decipher an insanely long Book of the Dead papyrus which lines a corridor there. They were in paradise, but was all too good to be true. They drifted apart after the summer, and Dana left a fond hole in Helmut’s heart.

A few weeks later Helmut actually ran into her at an opening at the Hemingway Gallery on 55th street. She was quite cold and aloof to him. Her wealthy, stuffy parents had never liked Helmut, and she seemed to have grown into the mold.

Ultimately, “Dana of Dendur” is about foiled young love, and how funny and sad it can be watching people grow up and change, sometimes in such a short and nebulous amount of time. Especially astute in the shadow of a 2000-year old temple preserved immaculately under stippled glass that mimics its original Nubian lighting.”