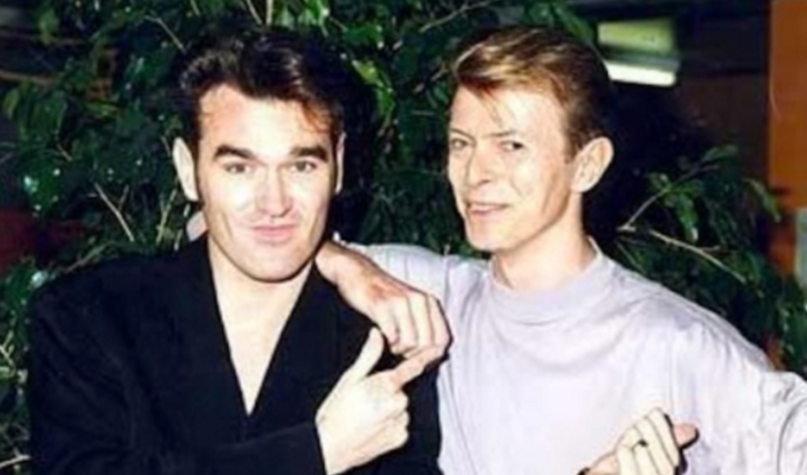 In 1995, Morrissey was asked to open for David Bowie’s The Outside Tour. Their time together lasted only a few dates, however, as — wait for it — Morrissey had to pull out of the tour due to an illness. Given that Morrissey returned to the stage just a few days later for his own headlining gig, it was widely believed that the two musicians got into a tiff backstage, leading to Morrissey’s untimely exit. Over the next two decades, Morrissey proceeded to take jabs at Bowie in the press. He later said his remarks were merely “high ribbing,” but the damage was done.

In 2006, Bowie turned down an offer to collaborate with Morrissey on Ringleader of the Tormentors, and he again rejected Moz in 2013 when the latter sought to use an image of the pair as the artwork for his reissue of “The Last of the Famous International Playboys”. Instead, Morrissey was forced to go with a photo of Rick Astley.

Years later, and even after Bowie’s untimely passing, it seems as if Morrissey still harbors a grudge.

As NME points out, during a gig in Manchester over the weekend, Morrissey not-so-subtly snubbed Bowie prior to performing “All the Best Ones Dies”. He name-checked several prominent celebrities who had passed over the last year, including comedian Victoria Wood, actress Caroline Aherne, boxer Muhammad Ali, and Prince. However, when it became evident he would not pay homage to David Bowie, fans responded with jeers. One person even went as far to call Morrissey a “cunt.”