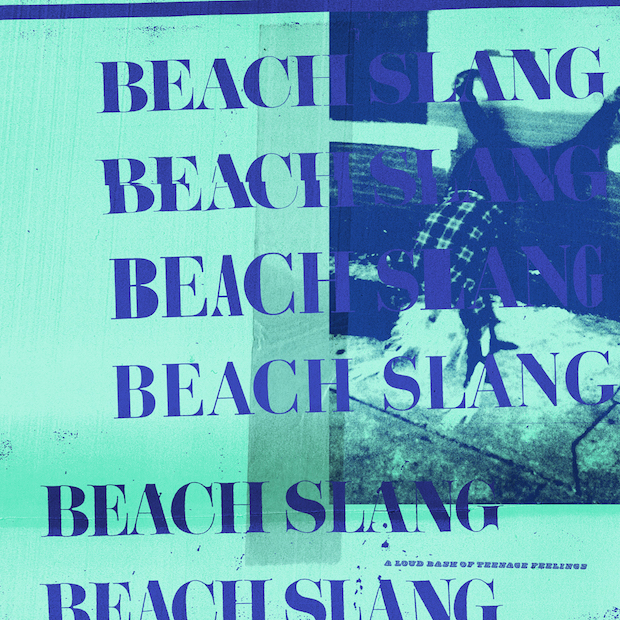 “Play me something that might save my life,” Beach Slang’s James Alex growls over chugging power chords on “Future Mixtape For the Art Kids”, the first track on the band’s sophomore album, A Loud Bash of Teenage Feelings. While not exclusively so, the phrase “music saved my life” often gets associated with the halcyon days of adolescence. Being a teenager means being overcome with new emotions, feeling things harder because you haven’t been callused by the world. But Alex isn’t a teenager; he’s a 42-year-old man who has spent decades in punk bands like Weston and the Cordova Academy Glee Club. Yet when he sings about the feelings of immortality and the drama of youth, it doesn’t sound like he’s stepping into a role.

After the release of their debut record, The Things We Do To Find People Who Feel Like Us, critics and fans alike were quick to celebrate Beach Slang’s knack for writing “sincere” tracks, songs that felt like bleeding-heart-on-your-sleeve confessional anthems. On Loud Bash, that feeling is increased tenfold but not for waxing nostalgia about the past. In the wake of Things We Do, Alex and co. were repeatedly approached by teenagers at shows who were touched by their music, retelling stories of their own struggles. As Alex began writing tracks for Loud Bash, he realized that he wanted to give something back to them. Their stories would seep in and intertwine with his own memories from being that age. It’s a record for the kids inspired by the kids.

It’s this fusion of generations that partly makes Loud Bash such a fresh and exciting record. There’s plenty of Replacements hero worship going on with the loud, tumbling arrangements and sweeping vocal hooks (Alex has taken to wearing Mats and Big Star buttons in the band’s recent press photos), but that’s what being a teenager is all about. It’s what the band’s own young fans do with Beach Slang, too — getting tattoos of the band’s name, memorizing every word to every song, scribbling lyrics on notebooks. The times change, but parts of being young, hormonal, and scared are universal. So, when Alex sings that he wants a song that could save his life, “Future Mixtape” might actually be the song that a lonely kid needs to hear. It’s their very own “I’m in love with that song” moment. Even tracks like the boisterous “Atom Bomb”, with it’s tick-tick-ticking chorus get away with some of the cliché because it feels like the impulsive chant that will resonate to start a mosh pit at a local VFW Hall.

But the record is not a copy-and-paste affair, simply retelling stories and the same angst-ridden tropes that have permeated in punk since the ‘80s. Alex deftly contextualizes everything — he has the advantage of having lived through it already. Instead of turning into dad in a Twisted Sister music video, he becomes Robin Williams in Dead Poet’s Society: telling his young peers that it’s okay to feel their emotions, showing them how to turn it into something meaningful. On “Wasted Daze of Youth” and “The Perfect High”, he recounts messy love affairs with images of spit and cigarette ashes. The visions of life and love he paints aren’t conventionally pretty or stable, and that’s what makes them meaningful. Knowing that this is made for the young fans who stop him at shows gives levity to his words, letting them know that there are other people out there who have felt the same things and still made it through to adulthood. He may not be getting invited to do an afternoon TV PSA soon, but he feels like a trustworthy voice who actually gets what it’s like to feel ripped up inside and misunderstood.

“Spin the Dial” recalls a drunken haze of self-loathing, hearing the noise of the radio but being too unstable to even turn it off. Later in the track he turns to drugs to numb the pain. It’s all basically a thesis statement for the band’s discography. In contrast, “Punks in a Disco Bar” brims with life. The rattling guitars and crashing drum fills bubble over with erratic enthusiasm. The tracks together capture the duality of youth, with all of the energy of a young body and its bouts of uncertainty.

Age isn’t a limiting factor on this record, but it’s a concept that informs the listening. A 14-year-old can come to the record and see themselves as they are now, while a 40-year-old can see how they were then. In that way, it’s a timeless work. The kids are alright and they always have been, even when it’s hard for them to see how their lives will play out. Thankfully, bands like Beach Slang exist to make it easier to cope with feeling weird and alone.

Essential Tracks: “Future Mixtape For the Art Kids”, “Punks in a Disco Bar”, and “Spin the Dial”