The Boss curates a set of tunes that act as companion to his new memoir, including unreleased material 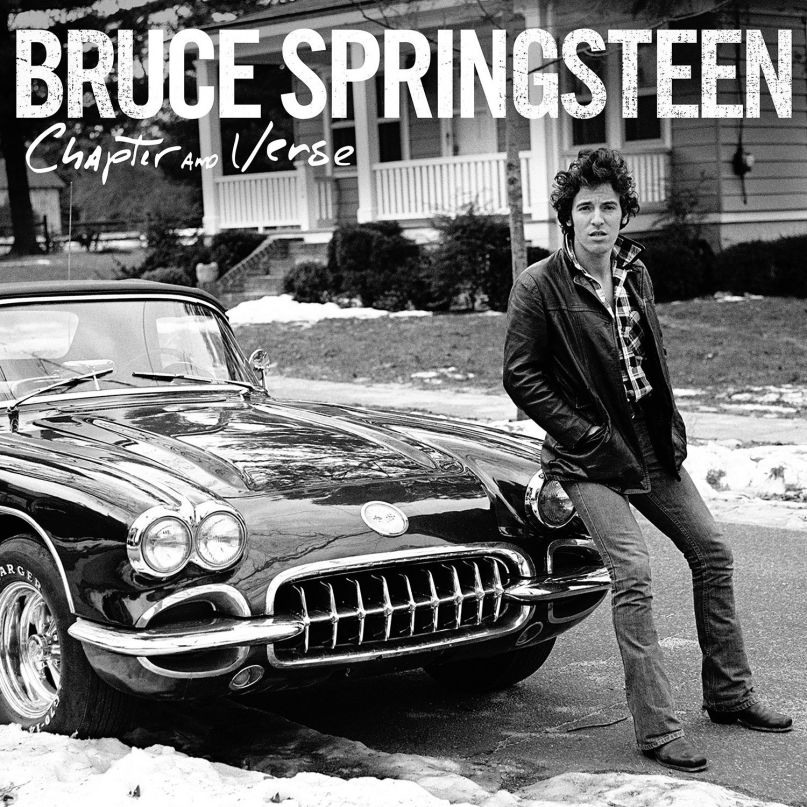 Make no mistake: Chapter and Verse is more bonus material than proper album, or even proper compilation. Of the 13 already released songs that make up the majority of the track listing (most of them classics at this point), 10 are already available in one place via the digital version of The Essential Bruce Springsteen. They’re even presented in the same chronological fashion. But here they’re repackaged as a companion album to Springsteen’s just-released autobiography, Born to Run, with each one handpicked by The Boss himself to represent a different theme or section of the book. It’s worth noting that the memoir and the music are sold separately.

One could argue that such hands-on involvement from the artist makes Chapter and Verse different and more special than The Essential Bruce Springsteen. After all, it’s hard to argue with the man’s choices. “My Father’s House” covers the conflicted relationship with his dad that dominates so many pages in the book, and the more joyous “Living Proof” — heard just three songs later — finds Springsteen affirming that he’ll have a less troubled bond with his own son. Other transitions are more about musical milestones than personal ones, most notably when the woozy boardwalk yarn of “4th of July, Asbury Park (Sandy)” switches gears to the motorized anthem that gives the bio its title. This all allows Chapter and Verse to tell a clear story, with numerous intriguing subplots within.

But the same could be said about The Essential Bruce Springsteen. Although the compilation process had more involvement from Columbia Records, it still tells a similar tale that, like Chapter and Verse, is presented in a past-to-present order to give a comprehensive overview of The Boss’ career. At 37 tracks, it may even be more comprehensive. Download the “Growin’ Up” demo, “My Father’s House”, and “Wrecking Ball” (and, let’s face it, if you’re a Springsteen fan, you probably already own all of those) to supplement its three discs, and you almost have Chapter and Verse in its entirety. Almost.

You see, Chapter and Verse — familiar as it is — also has an ace in the hole that just barely keeps it from being a shameless cash grab: the inclusion of five previously unreleased songs. And because the earliest dates back to when The Boss was just 16, they’ll likely be indispensable for anyone who considers themselves a Springsteen completist. The first two, crudely recorded with his high-school band, The Castiles, are more fascinating than highly listenable, and yet they serve as a crucial prelude to his narrative, embodying the raw rock ‘n’ roll spirit that, like so many other musicians his age, awoke when he first heard Elvis Presley and saw The Beatles perform on The Ed Sullivan Show. You can picture him and his bandmates doing their best aping of The Fab Four on “Baby I”, a simple kiss-off ditty that’s all jangle and boyish harmonies. A cover of the Willie Dixon/Bo Diddley collaboration “You Can’t Judge a Book By Its Cover” — recorded just four months later — traces Springsteen’s increasing interest in a more muscular form of rock music. Louder, rougher, and throatier than “Baby I”, it’s as if his voice changed both literally and metaphorically during the gap between the two songs.

Longtime fans will find subtler connections to Springsteen’s future work in the three tracks that follow. “He’s Guilty (The Judge Song)” (recorded with his proto-E Street outfit, Steel Mill) has bar band bombast in spades, but the lyrics could easily fit in on the haunted, skeletal masterpiece Nebraska. Like the main character of “Johnny 99”, the protagonist is an impoverished, desperate, and highly emotional criminal, having killed his mother, his wife, and her lover in a fit of passion. Unlike “Johnny 99”, however, it packs a full-band arrangement that only further teases the legend of Electric Nebraska.

Springsteen predicts his own future again with 1972’s “The Ballad of Jesse James”. Not only does the outlaw-themed barnstormer tell almost the same story as the folk song “Jesse James” (which he covered for We Shall Overcome: The Seeger Sessions in 2006), it also name-drops Billy the Kid. This connects to the monikers used in both “Wild Billy’s Circus Story” (from The Wild, The Innocent & The E Street Shuffle, released only a year later) and “The Last Carnival”, the final official track off of 2009’s Working On a Dream. Touchingly, that song served as a eulogy for the late Danny Federici, Springsteen’s organist, tubaist, accordion player, and glockenspiel maestro who also played on “The Ballad of Jesse James”.

Rounding out the previously unheard material is “Henry Boy”, a stripped-down demo where Springsteen begins settling into the rambling street poetry heard on Greetings From Asbury Park, N.J. If you were to press stop after it ended, Chapter and Verse would be a compelling prequel to a Springsteen biopic, its final note the bridge between the kid we’re just now meeting and the man we’ve already gotten to know over 43 years worth of records. Unlike the rest of Chapter and Verse, it’s a story we haven’t heard before.