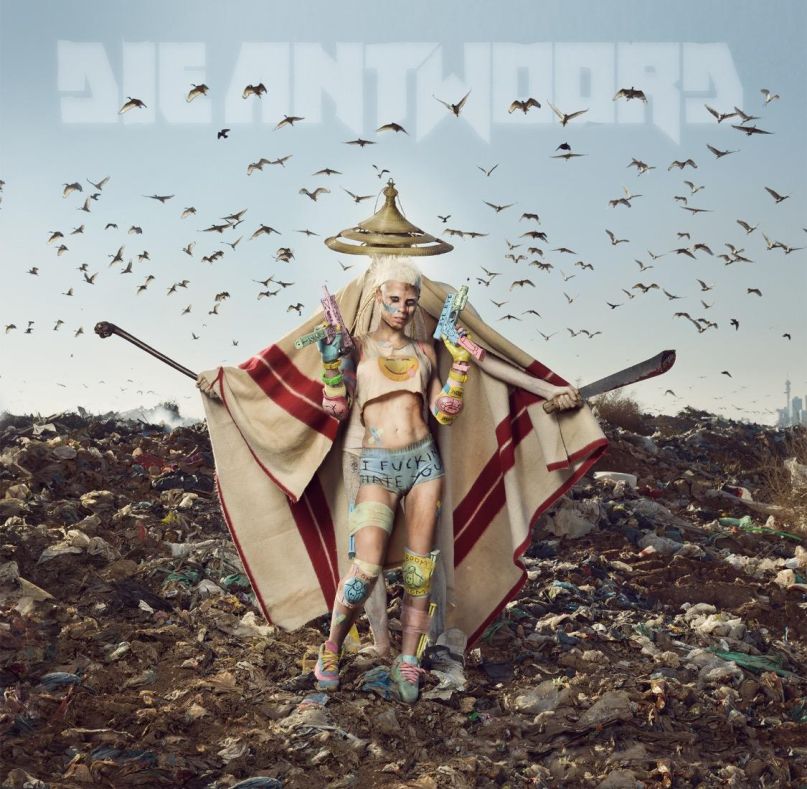 Just when you thought Die Antwoord were going to change, they go and tell the same exact joke they’ve been telling for seven years. Wait, it isn’t a joke? Oh, it kind of is, but kind of isn’t? Hold on, it’s just an exaggeration? It doesn’t matter. Regardless of how sincere the South African rave-rap duo are at this point, their once novel adoption of Zef culture (think underground South African white trash) has become a box they can’t seem to burst out of, no matter how furiously Ninja hops up and down and screams about his dick. The joke(?) just isn’t funny — or even shocking — anymore.

It’s a shame, too, because their fourth album — initially named We Have Candy, then Mount Ninji and Da Nice Time Kid — supposedly held some interesting changes: ¥o-landi Visser being more vulnerable, Ninja rapping in his own voice, renaming their DJ Hi-Tek GOD, a mysterious new mentor known as The Black Goat. But like the album’s preluding mixtape, Suck On This, the record mostly turns to the same old tricks, lightly tweaking the formula rather than fully committing to change in a way that’s compelling. The minor alterations might go a long way if Die Antwoord had ever moved beyond their usual sonic hallmarks — intentionally outdated house beats continue to make up most of the production — or started using Zef to do anything other than brag.

And yet that’s all they continue to do throughout much of Mount Ninji. Sure, Ninja’s natural voice is slightly more nuanced than that of his musical alter ego, somehow both nervous and laid-back at the same time. But he’s never been a technically strong or lyrically evocative enough rapper for it to make much of a difference on tracks like “Shit Just Got Real”. Here, he and Cypress Hill’s Sen Dog huff and puff about how they’re the only ones who both talk the talk and walk the walk when it comes to “gangsta shit.” At one point, Ninja takes a stab at a story verse that amounts to someone tapping on his window to tell him he has a flat, and him blowing them away with his shotgun. “Peanutbutter + Jelly” is only a touch more amusing, as he gets revenge on a loudmouth simply by smearing his penis on the guy’s cell phone instead of killing him. At least there’s a Reservoir Dogs quote (Die Antwoord continue to love their ’90s movies) and a pointed dig at Macklemore.

The same empty braggadocio dominates “Stoopid Rich” and “Jonah Hill”, where Ninja compares his balls to the titular actor because they’re so fat and sweaty. “Daddy” and “Gucci Coochie” engage in even more chest-thumping, just with a greater emphasis on sex, with ¥o-landi staking her claim as the more arresting MC. Although her lyrics are just as passe as Ninja’s, her ability to move from playful Afrikaans to a more guttural bark infuses her verses with a unique energy. Even if “Yo, her little panties on fire” will never make it into the Sex-Rap Hall of Fame, there’s still no denying the Mogwai-to-Gremlin metamorphosis of her voice.

But these songs, plus several others, are ultimately frustrating because they never achieve Die Antwoord’s self-professed new direction. Even more frustrating, the few tracks that try something different end up being some of the group’s strongest material to date. Their supposed flirtations with The Black Goat’s love of the occult are the most fun, especially when Jack Black puts on his best growling opera-singer vibrato to transform “Rats Rule” into a Halloween novelty song. The joke carries over to throwaway sketches “Wings on My Penis” and “U Like Boobies?”, as ¥o-landi and Ninja entice an adolescent rapper named Lil Tommy Terror with their deliberately lame hedonism.

Mount Ninji also picks up a bit in the final run of songs, all of which attempt to deliver on the group’s aforementioned promise of vulnerability. “Street Light” is another generic tale of Ninja beating someone down, but because it’s in defense of ¥o-landi, there’s at least a sweetness to it. “Alien” finds Die Antwoord’s female half confessing her own loneliness over an isolated music-box melody, and closer “I Don’t Care”, while still embodying the crescendo of a late-‘90s ecstasy trip, is an honest-to-God (make that GOD) love song, something that Die Antwoord have rarely — if ever — attempted before. And that’s exciting, the idea of two self-absorbed scumbags being tender in the face of trashiness. Like the handful of self-aware macabre moments on the album, it’s legitimately adventurous. But it’s also too little, too late, a sampling of what could have been. Despite vowing to mix things up, Mount Ninji is, for the most part, same shit (or in their Afrikaans, kak), different day.