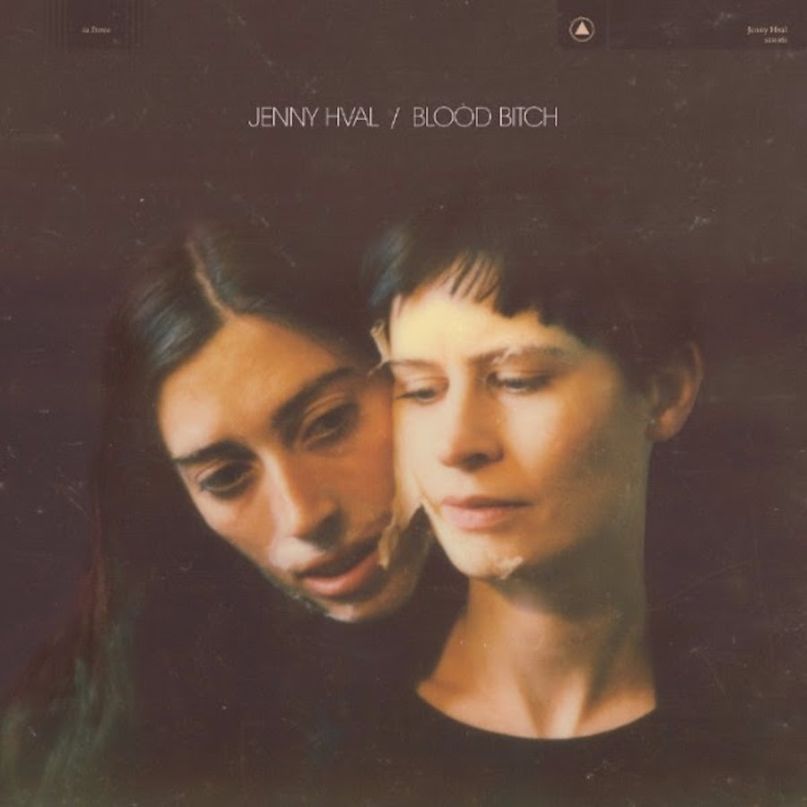 For something so necessary to human life, blood inspires contradictory feelings. It’s the sign of injury, a color shifting from blue to red, as it pools on the surface of the skin. In film, it’s the gaudy glory of slasher flicks or the deep-prune color of power transitioning from one vampire to a future vampire. In women, it’s the product of life collapsing into death, a literal object of what could have been. It’s beautiful, fearful, comedic, moving, or mournful. We struggle to accept its meanings because of what we’ve been told, but Jenny Hval looks to challenge that.

On her sixth album, Blood Bitch, the Norwegian musician returns to her magical world of avant-garde pop. Though the album begins with haunting bass in “Ritual Awakening”, it moves deep into the abstract, where Hval is quick to grab pliers and open every object that surrounds her. She experiments with darkness and various forms of liberation on the regular, particularly so in last year’s Apocalypse, girl, but Hval goes deeper on Blood Bitch while somehow staying lighter.

A phone-recorded conversation about the album pokes fun at her own concept. “What’s this album about, Jenny?” a voice asks. “It’s about vampire,” says Hval. “What?” the voice responds. “That’s so basic.” Hval, of course, goes into more detail about the intricacies of her songs’ stories, but it becomes washed over by music, a tongue-in-cheek comment on her own explanations and, to some extent, the unimportance of why. There’s more to it than that, but even when Hval does sing about vampires, it’s with a spirited curiosity. She toys with eternity on “Female Vampire”, tackling subjectivity, body consciousness, and desire as told through vampires. On “Secret Touch”, some of her most harrowing singing outlines a rigid storyline compared to the freeform lyrics of other tracks, particularly the moment in life where people choose to be bad for adrenaline rushes as well as sanity’s role in life and death.

Hval reclaims her throne as the girl who makes people squirm, this time by singing about menstrual blood. There’s no gawking at the female body, though. Instead, she talks about it as a means of connection. It’s there where Arthur Russell-styled electronics drum beneath her “Keeping It Together” performance art reference on “Period Piece”. It’s there in a recalled memory shared in “Untame Region”, between isolated vocal notes that slide downwards and tilt upwards towards the sky. “The next time I wake up, there’s blood on the bed/ Didn’t know it was time yet/ Or is it not mine?” she says, calmly. Hval compares herself to a dog “marking everything that belongs to no one,” before questioning the point of ownership, the power of blood, and the artistry of attempting to create a human being each month. Like that, ovulation becomes empowering in ways that weren’t obvious before.

Beneath her words are simple sounds. Samples of sharp breathing or pencils dragging across paper recall the intimate cues of ASMR. Six-minute explorative piece “The Plague” is rich with them. Stacked midway through her album, the song provides solace from all the blood talk, but not without its own imagery. Overblown sobbing comes through what sounds to be a broken basement speaker while organ rumbles like a warped reprise of Nico’s “Janitor of Lunacy”, complete with rewound whispering, ruminations about dogs, crackling firewood, water droplets, 8-bit theme music, and acoustic guitar buried beneath it all. It may be the album’s weirdest song, but it also contains two of the album’s best standalone lines: “Last night I took my birth control with rosé” and “You’ve got birth under control.” There’s wit in madness, and Hval has plenty to spare. By shoving a dozen ideas into one track, she presents philosophical questions with the absurdness and awareness of performance art, a delivery that’s difficult to accomplish free of arrogance. But Hval does all of this and more.

Her greatest interpretation of blood is that which pumps through the heart. Hval shares remarkably lush anthems of the highs and lows of love here, and the biggest, “Conceptual Romance”, may be the anthem for overworked Millennials. There is no weaker point than loving someone who’s hurt you. She strokes the toils of infatuation, sentimentality, and rejection, all while aware she has no idea who she is, a dizzying confession developed by lyrical and musical self-oscillation. “The Great Undressing” comments on the restless and literal nature of unrequited love while ‘90s dance pop synth waves behind her. It’s the act of making oneself available for love because your pre-determined feelings for that person tell you to, a sacrifice of self-worth in hopes of drumming up some more. Hval goes deep in this analysis without overdoing her poetics. She holds her own all the way to “Lorna”, the album’s closer, where biting another human is discussed as a form of pleasure via desire.

Though there are plenty of outlandish moments on Blood Bitch, Hval keeps the album in an ambient realm. Tracks fade into each other with a cool, seamless tone like blood flowing through veins. That liquidity is no more prominent than throughout “In the Red”. While breathy pants and hums pour over one another, creating a still, motionless sound, Hval offers a single line: “It hurts everywhere.” She manipulates the sounds into a wall of vibration. That phrase can be broken down to any of blood’s themes — the terror of love or the physical cramps of menstruation — which deconstructs the notion of pain and the image of blood so that each angle of the product becomes visible, no one context more vivid or startling than the other.

That ambient undertone of Blood Bitch gives its weirder moments the ability to impact even the most confused onlookers. Hval levels the grotesque, natural, and emotional roles of blood until the negative connotations, often delivered through pop culture, have been shed. It’s about time. Blood Bitch is what happens when someone tears pages from the dictionary and society relearns the words, the taboos and stigmas now absent. All that’s left to do is to approach the album the way you would modern art at a museum: with open ears, curious eyes, and a desire to exit with a newfound ability to find beauty in most everything around you — even sticky, red goop.

Essential Tracks: “Conceptual Romance”, “The Great Undressing”, and “The Plague”