Plus, a Glenn Frey statue now stands "on a corner in Winslow, Arizona" 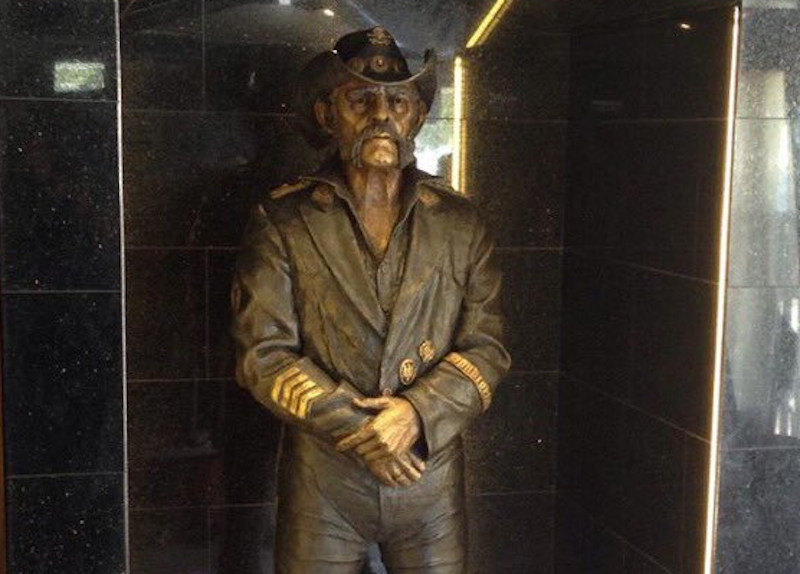 Prior to his passing in December of 2015, one of Motörhead frontman Lemmy Kilmister’s favorite haunts was the iconic Rainbow Bar and Grill in West Hollywood. Now, thanks to a a crowdfunding campaign launched by Katon De Pena of thrash metal outfit Hirax, Lemmy’s presence will forever be felt at the Rainbow.

De Pena’s campaign raised close to $23,000 to have the statue erected at the Sunset Strip bar. Los Angeles artist Travis Moore was chosen to craft the life-sized bronze sculpture, a job he undertook pro bono. He based the statue on an image taken by photographer Robert John, but removed the cigarette from Lemmy’s hand over concern that “someone could break that joker off or get caught on that.”

Todd Singerman, manager for Motörhead, told the LA Weekly that no one involved in the band interfered with the process, allowing the statue to exist as a true fan tribute. “This is for the fans. Nothing corporate,” he said. “Not the label, nothing. This is a fan thing and we tried to stay out of the way.”

The Rainbow, where celebrity drinking club the Hollywood Vampires met throughout the ’70s, housed the statue in a shrine on their patio. Singerman noted that there are plans to grow the tribute into a full Lemmy Lounge, a temporary bar that could become a separate Motörhead Bar & Grille. The location is a fitting one, as Lemmy frequented the spot whenever his band wasn’t on the road. He loved the video poker game set up on the end of the bar so much that it was actually brought to his bedside during his final days.

Check out some images and video from last month’s unveiling of the statue below (via Blabbermouth).

Incidentally, this wasn’t the only tribute statue dedicated to a deceased musician that went up recently. Phoenix, Arizona radio hosts Mark Devine and Paul “NeanderPaul” Marshall of KSLX crowdfunded $22,000 for a statue of Glenn Frey of The Eagles in Winslow, Arizona. Frey, who passed away in January, co-wrote the song “Take It Easy”, which features the line, “Well, I’m standing on a corner in Winslow, Arizona/ Such a fine sight to see/ It’s a girl, my Lord, in a flatbed Ford/ Slowin’ down to take a look at me.”

The statue stands in “Standing on a Corner” park not far from another statue that looks like Jackson Browne, who also co-wrote the song. The older statue, which has a mural of a woman in a flatbed Ford behind it, has been there since the ’90s, but Frey’s was unveiled last weekend as part of Winslow’s annual “Standing On the Corner” music festival. (They really milk that lyric for all it’s worth.)

Take a look at both the Frey and “Browne” statues below.