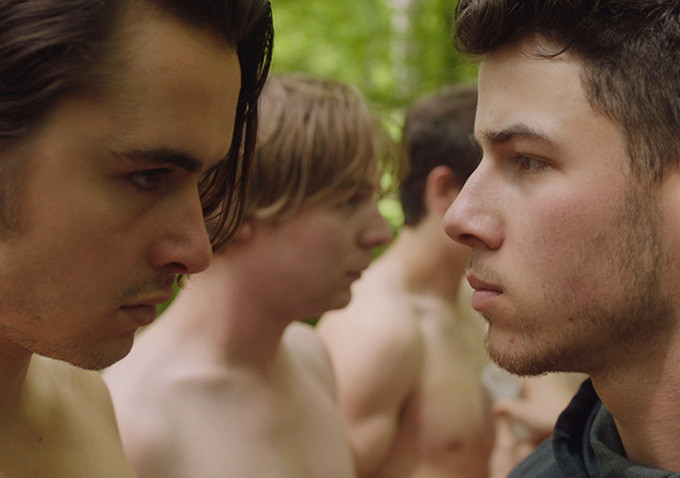 “To the greatest group of gentlemen the world has ever known!”

The most telling moment in Andrew Neel’s Goat doesn’t arrive during a robbery or hazing incident. It arrives at the movie’s halfway point, when a pledge asks another, “If you quit, what else is there?” There is a drive in so many students pledging fraternities and sororities to not strive for success, but to not quit. Quitting is for cowards, better to deal with the devil you know, fear of the unknown, etc. The psychological ramifications are a whole other story. Neel could have solely focused on what it takes to join certain Greek organizations, but added a more intricate layer by adapting Brad Land’s memoir. Goat deals with masculinity, fraternities, and PTSD in equal doses, covering all of them with brutal precision and, most importantly, success.

We meet high school graduate Brad (Ben Schnetzer) at a party hosted by a friend and fraternity brother of his older brother, Brett (Nick Jonas). It’s your typical onscreen fraternity rager. Loud music. Cocaine being served freely. Ladies making out with other ladies. It’s an intense scene, and while Brad has been having a good time, he just wants to go home. On his way out, he encounters a young man who asks for a ride home not too far away. Brad hesitates, but he relents and offers assistance. The “ride home” becomes a 20-minute journey, culminating in Brad being mercilessly beaten, robbed, and carjacked.

It’s here that we bear witness to what will debilitate Brad throughout the rest of Goat. The men could have left Brad on the side of the road, but they decided to beat him up for fun. There was no resistance. He is totally emasculated in this moment, further demoralized when he reports the incident to the authorities. The questioning officer can’t fathom why Brad would give strangers a ride. What kind of person would ever do that? The officer’s convinced that Brad must have been en route to score drugs. Later on he asks his brother, “Do you think I’m a pussy? I don’t know why I didn’t fight back.” He was in a hopeless situation, but it’s been driven into us to get up and fight. Even if it’s a lost cause.

So Brad has been beaten down, both physically and psychologically. He actually goes for help and is mostly dismissed. It’s this rejection of who he is that drives him to make it through Phi Sigma Mu’s “Hell Week” during his first semester of college. During this time he’s forced to slap other pledge members, binge drink to sickening excess, and get tied up to other pledges while they sleep. One pledge is even urinated on after being thrown in a cage fit for small animals. These acts are only the tip of the iceberg (I won’t bring up the goat). The words levied at them are just as shocking, as we hear the brothers throw around slurs like “faggot” and “pussy” at random. Even Brad’s brother Brett participates in the torment. Break down, break down. More, more, more. And don’t forget the goat…

Neel, along with co-writers David Gordon Green and Mike Roberts, spends just as much time looking at the effects of these actions as he does with the sickening events that transpire. The director uses the device of having Brad looking at pictures on his phone of his post-carjacking injuries during moments of stress. Later on, although he looks at a picture where he is fully healed on the outside, it’s all an illusion. He never got over his emasculation, and entering into a world where fear and masculinity are a driving force, he can’t hope to survive.

At a post-screening Q&A at Sundance, Neel said he wanted to make his Lord of the Flies. That book is all about survival of the fittest, and like that book, Goat doesn’t follow the tale of the meek inheriting the earth. This is a tale of boys gone wild. The only woman of substance is forgotten after the first 25 minutes, but this isn’t exactly a failure of the Bechdel test on Neel’s part. The focus of the movie is based on Brad’s focus to succeed in this group of would-be men. The only room for women in their lives is in their personal beds.

The content can only go so far without standout performances, and the two brothers in Goat are excellent. Schnetzer’s Brad is a wholly sympathetic character throughout, as he inflicts pain upon himself, is forced to do so upon others, and struggles with both the recent past and present. A more surprising turn comes from an ol’ Jonas Brother, Nick, whose portrayal of Brett offers a student who begins to see the pointlessness of what he’s become and fears his brother might follow the same path. Jonas is a natural.

With Goat, Neel is more concerned with tackling what it means to be a “man” and college hazing than he is with open condemnation of the Greek system. He asks us to take a closer look both within ourselves and at the actions of others. You can be a sensible person while maintaining a strong sense of self. There is nothing wrong with being strong. There is something wrong with being an asshole.

And watch out for a cameo by one of the film’s producers. It’s a doozy.