Live Review: Local Natives at the Greek Theatre in LA (9/16)

The LA band poise themselves to take their next great leap 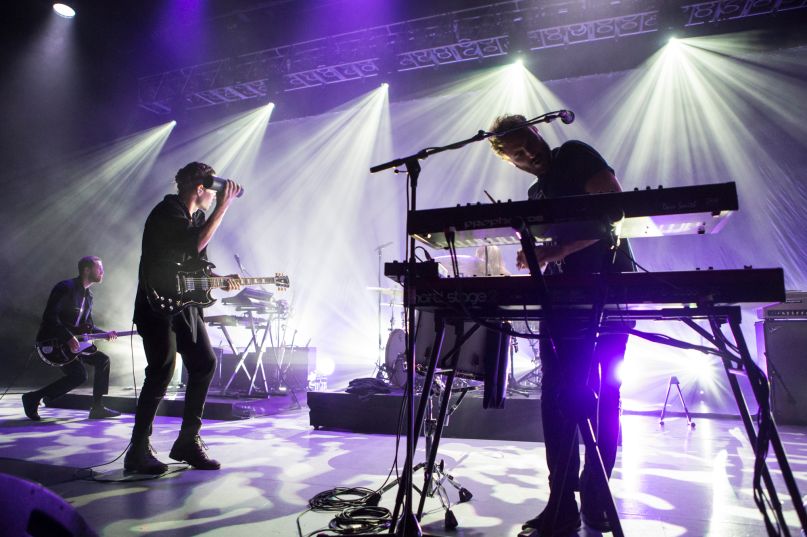 There are reminders all over the hip neighborhoods of Los Angeles that Local Natives’ third album, Sunlit Youth, is now out. There are easily 10 billboards in Silver Lake, Echo Park, Los Feliz, and Highland Park, not to mention the group’s practice space on Sunset Boulevard, which has the album cover painted on its street-facing walls. Though the band have a global audience, there is still a noted attention given to their home base, right down to the first word in their band name.

So it is appropriate that a week after their album was released, they played at one of their city’s most beloved venues. The Greek Theatre on a Friday night has an electric atmosphere like few others, and this one delivered; the outdoor air was cool and comfortable, the harvest moon shone brightly overhead, and an audience of diehards turned up to sing their little lungs out to songs both old and new.

Still, it was hard to ignore the obvious. The venue’s third tier was hardly sold at all, a slightly smaller turnout than when the band played the same venue at the end of their run for previous release Hummingbird. That Greek show was what their touring built towards while this one is the starting point. Maybe the band needs a couple legs to build up some momentum, but it still raises the question as to whether Local Natives will continue to expand their fanbase or if their reach has peaked.

Watching the band perform, though, the same impression remains that has been there since the group was playing the smallest stages in Los Angeles: that there isn’t a ceiling for Local Natives. The set was bold in its decision to highlight the new songs. “It’s great to play these songs for people that have actually heard them,” co-frontman Kelcey Ayer commented after a pair of new tracks opened the show. And it was remarkable how well the Sunlit Youth material went over. Despite the freshness of the release, fans already knew the lyrics to most of the songs, letting out a giant cheer during the “Fountain of Youth” line that mentions a female president. “Dark Days” got the special guest treatment with Nina Persson appearing to duet the cut with Ayer.

(Read: What the World Needs Now — A Conversation with Local Natives)

Of the old material, there isn’t much surprise in what songs have survived to become live staples. The most welcome inclusion in the set was “Colombia”, still the most devastating work in their catalog. The song opened with just Ayer and Taylor Rice on stage, allowing Ayer to mourn the death of his mother in quiet reverence before the rest of the band joined to blow the song up in a noisy finish. Elsewhere, everything from the nuanced “Ceilings” to the bombastic “Sun Hands” have become rallying cries. They are songs meant for communion, and whether at a festival or their own big venue show, that’s exactly how they land.

Local Natives are a band doing everything they can to reach as many people as possible. Sunlit Youth is their first record with a major label, so the band should have the support they need on a business level. And performances like the Greek demonstrate a band with the songs, chops, and charisma to reach the highest levels of rock stardom. Hell, they aren’t even shy about taking a stand for bettering the world, with Rice announcing near the end of the set that a portion of ticket sales was going to charity for gender-based violence.

Watching the band, there’s the sense that everything from here is up to fate. Will they land a song at rock radio? Will they get a television sync that expands them to new ears? These are the kinds of things that need to happen for Local Natives to make the next leap. They’ve gone about as far as they can go on their own.