Martin Shkreli is auctioning off a chance to punch him in the face, and already someone has bid $78k

Now's your chance to sock the pharmadouche right in the schnoz 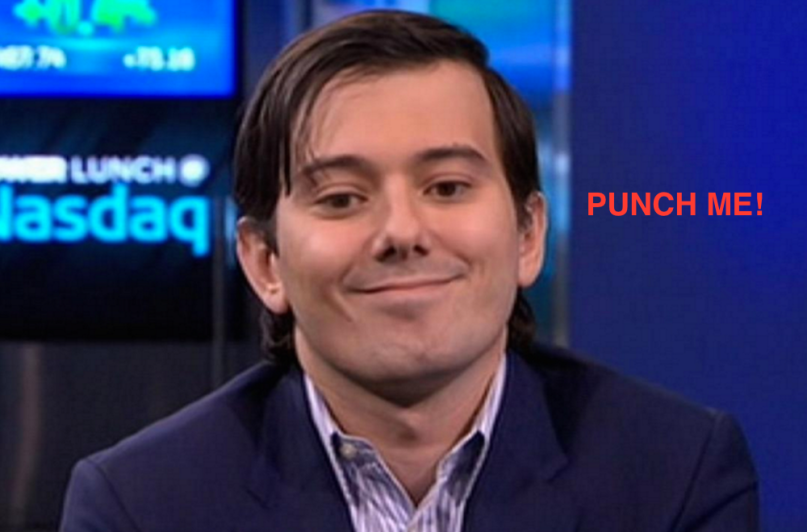 It’s not even October, but Christmas has come early, boys and girls. Martin Shkreli, the pharmadouche who bought Wu-Tang Clan’s one-of-a-kind album and then threatened to destroy it, is auctioning off a chance to punch him in the face.

“I will auction one slap/punch in the face to benefit my friend Mike who passed away & leaves behind a young son who survived cancer,” he wrote on Twitter on Monday. It’s a touching cause, but that’s not really the point. All of the Internet has since been busy lacing up their boxing gloves.

I will auction one slap/punch in the face to benefit my friend Mike who passed away & leaves behind a young son who survived cancer. DM bids

According to Shkreli, bids so far have reached upwards of $78,000. (Is that you, Ghostface Killah?) It’s a hefty price tag for sure, but the pharmamonster is throwing in a bonus: The winning bidder can film the whole thing and forever relish the moment when his/her fist met Shkreli’s smarmy mug.

Alternately, if you’re a little strapped for cash, the self-described “world’s heel” is offering a cheaper option. “I updated my listing such that if you do not want to hit me, and instead have dinner with me, you may. $1,100 bid.” Not quite as enticing, let’s be honest.

I'll match donation to a certain point. You may video the slap/punch. Mike architected my publicity stunts & I bet he is watching, smiling. https://t.co/kqnvQtJ10T