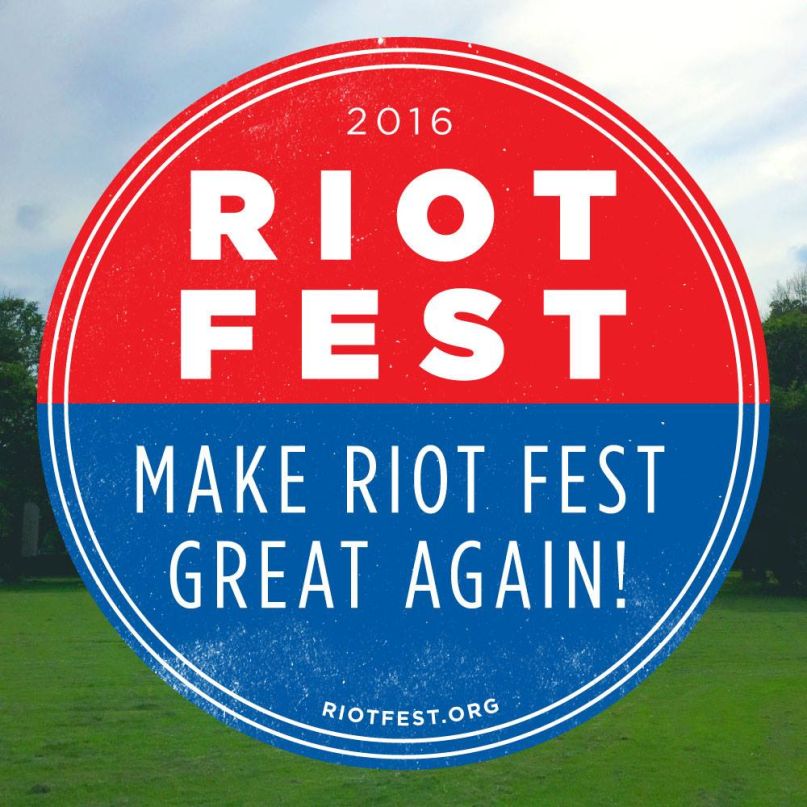 Brethren, take a deep breath. Riot Fest Chicago has a home again. Last year was tumultuous, with nobody quite knowing if Douglas Park, a punk-free haven in the Windy City’s southwest side, would suffice after the festival was booted from its beloved home in Humboldt Park. It did, but it still felt wobbly, with buckets of rain and shoes of mud feeding into a general sense of instability. Here’s the good news: 2016 was Riot Fest’s smoothest, most organized outing since its early days at the Congress Theater. Crowds were manageable, lines flew by, and Morrissey actually showed up (30 minutes late, but still). Morale was high.

That said, something’s changed. Riot Fest’s always anchored itself on a carnival and freak motif that dovetails with the event’s punk roots. In previous years, red-and-white carnival games lined walkways alongside wrestling rings and the rides of our childhood, providing ample distraction for those with weary ears. Now, you’ll see a glowing ferris wheel near the entrance and a vintage car or two, but the carnival experience has been mostly relegated to a dedicated area near the back of the park. What was once a motif is now just another attraction.

Frankly, I prefer the streamlined design; in Douglas Park, there’s no bottlenecks or clogged walkways, making it easy to march from one stage to another. But there’s no denying that character is in short supply. Thankfully, there were enough characters in the audience to make up for it. Where Lollapalooza and Coachella’s crowds have essentially devolved into a collision of crop tops and cultural appropriation, Riot Fest’s arrive in search of kindred spirits, whether that be through studs, denim, or obscure t-shirts. If anyone’s going to appreciate your Throbbing Gristle tank (or, hell, even your Enema of the State tour tee), it’s here. Props also to those brave enough to go off-brand — I’m looking at you, Soulfly jersey.

Because no matter how much Riot Fest continues to expand its programming, it will always be a haven for the freaks, geeks, and scumbags, the nerdy and passionate. Lollapalooza’s great, but no one’s there for the music. At Riot Fest, music is everything, even if much of it suffers under the spectres of our accumulated nostalgia. Still, it’s cool as fuck that over the course of a single weekend you can see hip-hop icons like GZA and Nas light up the same stages as the weirdos in Ween and NOFX, or get misty as Julian Marley honors his father across the lawn and Sleater-Kinney teaches a new generation that Carrie Brownstein is more than “that girl from Portlandia.”

Dig deeper and you’ll find the acts that have no hits to coast on — the teensy Storyheart and Rebel stages hosted a bevy of promising up-and-comers, from Jess Abbott’s post-grudge throwback, Tancred, to the blissed-out pop of Virginia’s Turnover to the hometown wunderkinds The Walters, whose midday Sunday set in the intimate StubHub Sound Stage was one of the best things I saw all weekend.

So, who needs the carnival? Or fashion? Or gourmet concessions? Riot Fest grew so fast that, for a spell at least, it seemed like the music was almost lost in the morass. Last year, Associate Editor Collin Brennan asked where Riot Fest will go next. In 2016, it sorta went backwards. But in doing so, it seemed to rediscover itself.

Oh, and The Misfits reunited. Keep clicking if you wanna read about that.