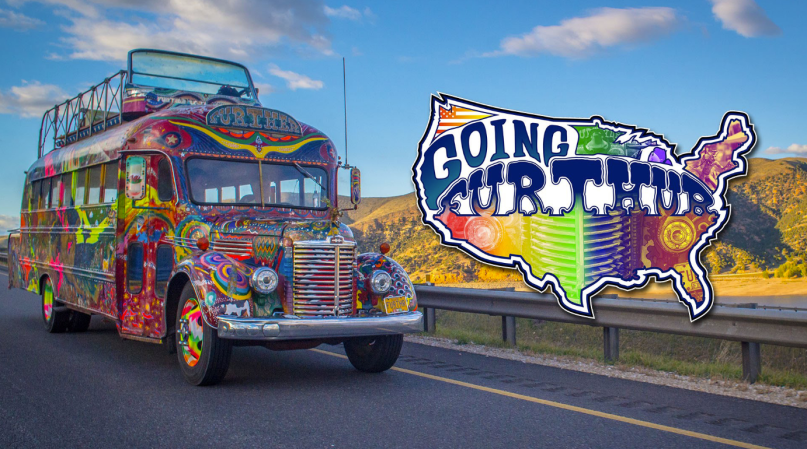 In 1964, One Flew Over the Cuckoo’s Nest author Ken Kesey purchased an old International Harvester school bus. The plan was to gather a group of friends he’d later name the Merry Pranksters, deck the bus out in psychedelic artwork, and drive the thing cross country filming a drug-filled road trip for the ages. Though the film wouldn’t see release until 2011 as Magic Trip, that bus, dubbed Furthur, would go on to become a legend of counter culture.

Two decades after Furthur retired from the road, Kesey acquired a new bus and recreated the original as promotion for his memoirs, The Further Inquiry. Cut to 2014, and Kesey’s son Zane put gas back into Furthur for a 15,000 mile, 75-day journey that brought a new group of Merry Pranksters to festivals and community events all across the country. This time, the accompanying documentary came together much quicker, and Going Furthur is set for release later this year.

To help set the doc’s trippy mood, former The Matches frontman Shawn Harris wrote “Dream is Alive” under his St. Ranger moniker. The song is exactly the sort of chill, psyched-out tune you’d expect the Merry Pranksters to be playing from Furthur’s sound system. “I wrote this track watching archival footage of [original Furthur driver] Neal Cassady (the real life Dean from the novel On the Road) driving a psychedelic painted school bus full of hippies on acid,” Harris explains to Consequence of Sound. “I tracked it in my ’74 Airstream. The lyrics are based on the theory that what we perceive as ghosts are actually reverberations and delays from other times, that linger in specific spaces. I wasn’t on acid though, seriously.”

In the spirit of the creativity that drove Furthur to be born in the first place, Harris has shared the complete stems to the song under a Creative Commons lisence. “What’s that mean? That you can take my drums and put them on your own album, or you can use the whole song in your skate video, or you can cut up my vocals and make a ransom mp3 or a club banger // whatever you do/make— if my whole or any of it’s parts are useful to you, they are your tools now.” The one catch? “This is a creative commons for artists and DIY-ers… if you’re Levis, you gotta pay. If you’re not sure if you’re Levis or DIY, or you want to share what you made, which I hope you do— find me and  msg me— I respond.”

Access the stems here. Below, check out the latest “Dream is Alive”-soundtracked trailer for Going Furthur and get on the bus.