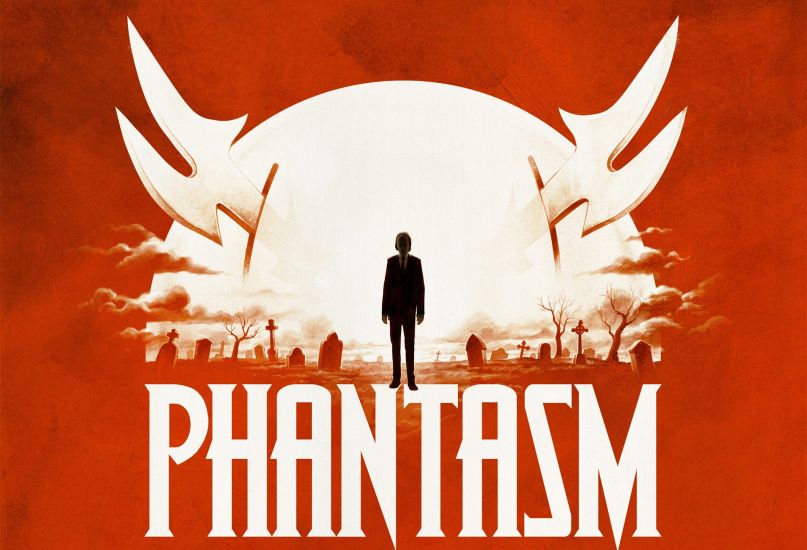 Don Coscarelli can’t remember a time when he wasn’t a horror fan.

“It was an early love,” the 62-year-old writer and filmmaker recalls. “It was just an innate thing. One day, [my parents and I] walked by the theater and the movie was some tribute to ’50s movies with flying saucers, and I practically grabbed them.

“When you walk into a genre movie,” Coscarelli explains, “when a character opens the door, you don’t necessarily know what’s going to be on the other side of the door.”

Born in Libya and raised in Southern California, Coscarelli broke into the film industry at a very young age; in fact, he was the youngest director to sell a feature film to a major studio when Universal Pictures scooped up his 1975 debut, Jim the World’s Greatest, at age 19. A year later, he brought his second picture, Kenny and Company, to 20th Century Fox.

Finally, at age 22, Coscarelli began production on his 1979 cult horror masterpiece, Phantasm, a film that would eventually spawn four sequels and go on to define him as a can-do filmmaker, an artist who could transform household materials into crowd-pleasing, genre fare. Of course, before such accolades were laid upon him, he had to film the damn thing.

“[Phantasm] was unconventional in the making,” Coscarelli admits, extrapolating a bit on the never-ending shoot, namely how the cast and crew would have to consistently reassemble for reshoots to fill out any early plot holes. “The script was evolving as the movie was being made. The movie was written while it was shot. Really, it was written in the editing room.”

But these long shoots built iron-tight relationships — and that’s what kept Coscarelli going.

“It’s one of the blessings of making that movie,” he argues. “All of those actors from Phantasm are generally wonderful people. Reggie [Bannister] … he really is Reggie, okay? Bill Thornbury is the guitar-strumming, nicest guy you could ever meet in the world.” And of course, where would Phantasm be without its Tall Man, the late, great Angus Scrimm? “The interesting thing is that Angus, who is this horror killer, was actually this genial, kind, intelligent man.”

After two long years working alongside his friendly cast, Phantasm wrapped and the Tall Man with all his evil forces were unleashed on an unsuspecting world. However, in those pre-Internet days, lasting success wasn’t so easy to spot. Nevertheless, Coscarelli remembers an early moment when he realized he might have made something special.

“I went and walked in on [a screening near] Hollywood Boulevard, and there’s a couple sitting in front of me. When the kid opens up the box and the bug pops out, I see the guy reaching behind his girlfriend, and he’s getting his hand ready.

“That means he’s already seen the movie,” he explains, “and this is Saturday night, and it opened the night before. So he probably saw it on Friday and brought his girlfriend back just so he could be there when the bug jumped out. He grabbed her on the back of the head, and she screamed!”

Still, it took almost a decade for the director to grasp the size of his fanbase.

“Nobody was talking classic when the first movie came out,” he admits. “When we started to make Phantasm II nine years later, it was like every review went, ‘This new one is okay, but the first one is a classic!’”

With the film’s classic status came a whole new breed of fans: an army of Fangoria-reading fanboys.

“The funny thing I’ve started to learn about Phantasm as I’m getting older,” Coscarelli begins, “is that at the time I thought I was just making a horror film. It turns out that, based on the 30- or 40-year-old guys that I’m meeting, we were making an empowerment film for teen males. Who would have thought that at the time?”

Coscarelli loves it, though.

“Making a living in [this genre] is wonderful because the horror fans, which I consider myself one of, they like to cogitate on the movies,” Coscarelli says. “They like to go back and talk it over and chew on it and think about it. They’ll come up with a pearl of wisdom, an interpretation of the movie that might be even better than what I was intending!”

One such fan was J.J. Abrams, director of the highest grossing film of all time. Even with all that success, he’s still a true-blue Phantasm fanatic. That shiny Stormtrooper in Star Wars: The Force Awakens? Captain Phasma was a reference to another shiny killer — the flying ball from Phantasm.

Abrams’ love for the film and the Tall Man goes back a bit further, though. Over 10 years ago, the blockbuster filmmaker cast Angus Scrimm as a recurring character on his hit TV show, Alias. “[Angus] just loved J.J., loved working with him,” Coscarelli adds. “So we have a friendship. I touch base with him, but he’s off working on all his other cool movies.”

“I got an email from him about wanting to screen Phantasm over at his Bad Robot company for his employees,” says Coscarelli. “I think some of them had never seen the movie, so he wanted to share it with them.

“Then he found out all I had was this beat-up, old 35 mm print and the standard definition DVD. So, he made it his mission to figure out a way to get something done with Phantasm.”

Soon after, Coscarelli was invited out to Bad Robot’s offices. Alongside production manager Ben Rosenblatt, the two began the exhaustive undertaking of restoring the classic. Similar to the film’s original shoot, it took some patience to see the Phantasm restoration come to fruition, and obviously Bad Robot was busy with a few other little productions.

“It was a long process, over a year,” says Coscarelli. “I’d get a call every month or so, ‘Come on over. We have time.’”

Daunting or not, Coscarelli was excited by the opportunity to fix issues that were glaring to him.

“You know, there were no visual effects when we made Phantasm, and so it was all pretty much done with Scotch tape and fishing line,” Coscarelli recalls. “We were able to go through and digitally remove all the fishing line, which is ridiculous, but was great.”

Some fans may miss the wholesome, DIY aesthetic, but it’s allowed Coscarelli to enjoy his film so much more: “One of the joys of this remaster is that so many of the flaws have been erased now. I did get to watch it in its entirety with some people, and it was just a much more pleasurable experience for me.”

Nearly 40 years later, the spirit of Phantasm is alive. Not only is the newly remastered print hitting select theaters this fall, but so is the franchise’s long-awaited fifth installment: Phantasm: Ravager.

Reuniting the original cast and featuring Scrimm’s final performance, the sequel is the first Phantasm film not to be directed by Coscarelli, who instead handed off the director’s chair to David Hartman.

However, Coscarelli served as producer and helped co-write the film, proving he’s hardly abandoned the series, which remains dear to him. “One of the great experiences of my life was making that movie and making these lifelong friends,” he contends.

In the end, Coscarelli is that same horror fan who tugged on his parents’ arms, begging to see the next big monster movie. “I almost feel like I’ve lost my sense of propriety,” he admits. “I’m like a Phantasm fan myself.”

Welcome to the club.