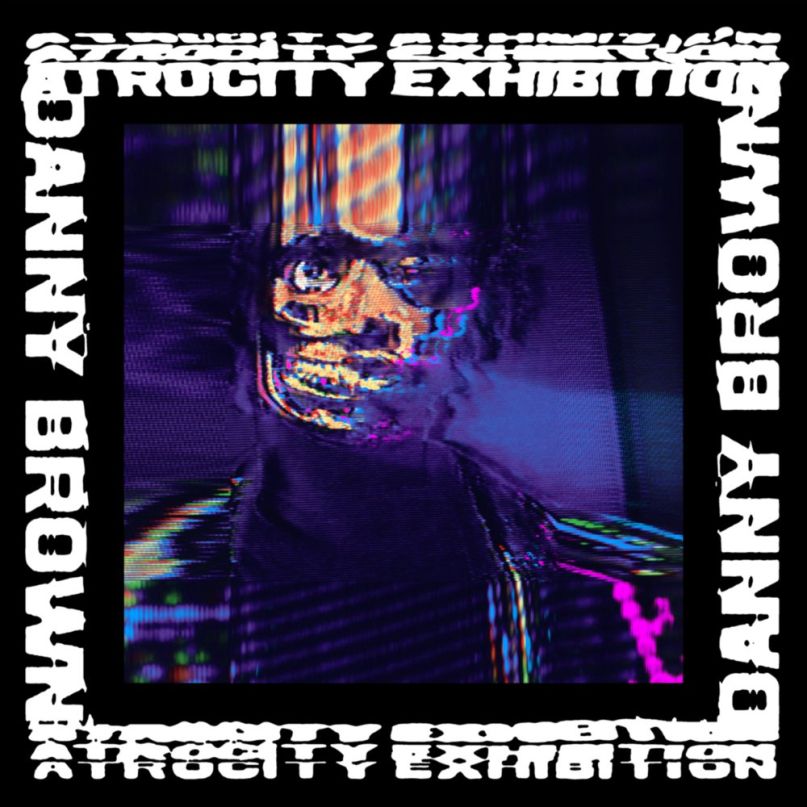 If you consider yourself a fan of Detroit rapper Danny Brown, you’re probably used to defending his music. The most telling line of his career, when he defined himself as a “hipster by heart but I can tell you how the streets feel,” is ultimately more indicative of his weird side than it is his considerable experience in the Detroit streets. Whether it’s his voice (sometimes a maniacal squawk, sometimes a rabid bark), his WTF lines (“Bitch pussy smell like a penguin!”), or his taste for off-kilter beats, Brown just does things differently, and he’s divisive because of it.

Brown’s last album, 2013’s Old, had the most mainstream appeal of any of his projects, with festival-ready, EDM-influenced songs all over its second half. His latest, Atrocity Exhibition, is closer to his 2011 breakthrough, XXX, which was full of jittery, noisy production that showcased his experimental beat selection. Brown’s list of influences for Atrocity Exhibition is insane, including art pop visionary Björk, metal titans System of a Down, and the endlessly influential post-punks Joy Division (whose 1980 album Closer opened with a song called “Atrocity Exhibition”). Mostly produced by Paul White, with additional help from guys like The Alchemist and Black Milk, it has a creepy, antsy vibe, with plenty of unorthodox instrumentation: the queasy horns of “Ain’t It Funny”, the Stooges-style guitar riffs of “Golddust”. That’s not to say it’s a mess of random, incongruous sounds; it reportedly cost around $70,000 to clear the album’s samples. Brown knew what he wanted this beast to be, and he went to great lengths to bring it to life.

As out-there as Brown sometimes is, one thing makes him positively traditional: He takes the art of rapping seriously. A big deal has been made about the Iggy Azalea line on the album’s closer, “Hell for It”, but more telling than his mention of the polarizing Aussie is his gripe with rap in general: “Respect for lyricism in this game, ain’t none left.” On “Really Doe”, the monstrous posse cut that already feels like the new “1 Train”, he holds his own next to a characteristically agile Kendrick, wordplay wizard Ab-Soul, and Earl Sweatshirt, who’s getting scary-good as he gets further into his 20s. When he’s really, really rapping, Brown’s subject matter may not be new, but what he says usually is: “Powder stains on my Balmain/ Slurp that pussy up just like lo mein,” he blurts on the clanging “Pneumonia”. That kind of thing is Brown’s specialty, and it can be deliriously entertaining.

Ultimately, it would be wrong to reduce Brown’s lyricism to just bars. Atrocity Exhibition tells a story of drugs, sex, and rap that’s not always pretty. In fact, Brown sounds downright miserable at times. “Might need rehab, but to me that shit pussy,” he admits on “Ain’t It Funny”. Instead of seeking serious help, he’s left alone to grapple with his demons, ingesting countless substances to fight them off, just trying to maintain. During an unusually relaxed verse on the Kelela-featuring “From the Ground”, Brown thinks about how far he’s come in life: “I used to ride a Schwinn/ Now I’m on a tour bus, going places I ain’t never been.” Yet he’s constantly poisoning his success with excess. Like Earl Sweatshirt’s I Don’t Like Shit, I Don’t Go Outside, Atrocity Exhibition is a dark, introspective record from a major rapper who could have more widespread popularity if he wasn’t insistent on telling his story in his own way.

Now 35, Brown is something of a late bloomer. On “Tell Me What I Don’t Know”, he thinks back to his younger days in Detroit: “Flashing bankrolls in the club, taking pictures/ Thinking we was grown men, really lil’ niggas.” That could’ve been 15 years ago, a fact that can help listeners appreciate Brown’s long-developing artistry, the ways he’s come into his own over time. These songs aren’t for everyone, but they stand as some of the most fearlessly created music of the year — even if Brown sometimes sounds petrified for his life.