Empire of the Sun – Two Vines 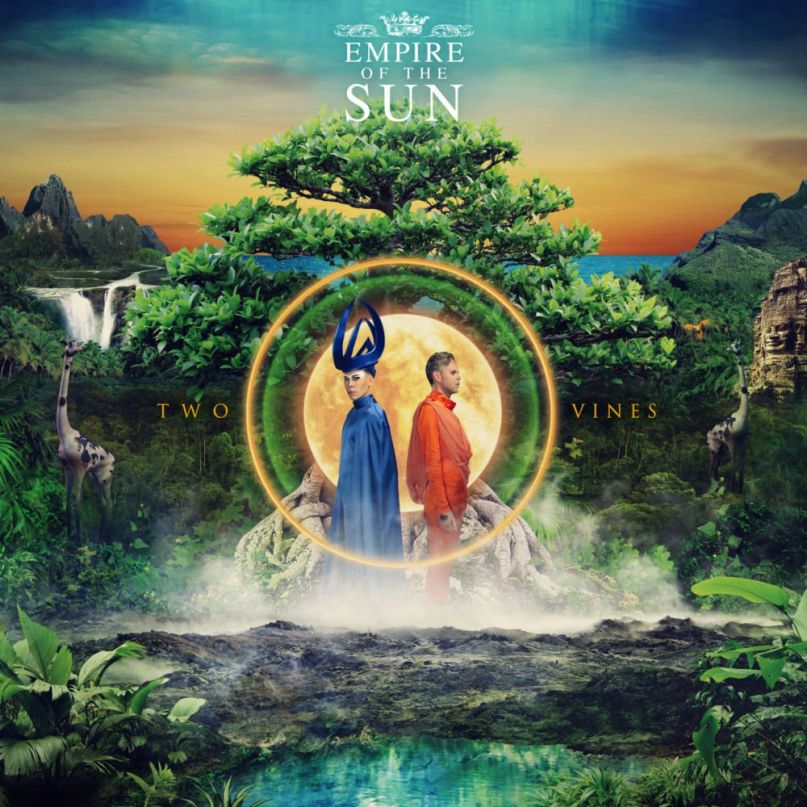 Since the massive success of 2008 breakthrough Walking on a Dream, Empire of the Sun have been touring voraciously, gradually floating to the top of the international headliner circuit. The Aussie duo of Emperor Luke Steele and Lord Nick Littlemore aim to solidify that status with Two Vines, their third studio album and follow-up to 2013’s Ice on the Dune. At times, the album comes incredibly close to ’80s soundtrack pastiche (think 1985 cult classic Better Off Dead), especially on songs like “Digital Life” and “First Crush”. After repeated listens, however, that familiar comfortability proves to be the key to what Empire of the Sun have been doing all along.

Tugging on the threads of nostalgia, Two Vines instantly catapults the listener back to a more innocent time, when playing outside until the street lights went on and watching sitcoms like Family Matters or The Cosby Show was the thing to do on a Saturday night. Co-produced by Peter Mayes (Sia, The Killers) and featuring contributions from Fleetwood Mac’s Lindsey Buckingham, Wendy Melvoin of Prince’s band the Revolution, and former David Bowie collaborators Henry Hey and Tim Lefebvre, Two Vines gains its past-leaning tone as much from its stacked guest list as from its songwriting.

The record was also partly recorded in Hawaii, which could explain its overall mellow feel. Pre-release press noted that Steele would go surfing in the morning, soak up the sun, and then return to the studio in the evenings to compose. Beginning with the ethereal “Before” (which references the ocean multiple times), Two Vines thrives on a dreamy, ‘80s electropop vibe until the very last note, building a satiating consistency and refreshing appeal.

Lead single “High and Low” is an infectious and inviting dance number. Another highlight is “There’s No Need”, a subdued, loose love song that can’t help but feel genuine. “There’s no need to choose sides/ We are on the same team,” they sing, as angelic background vocals fill up the track.

The record’s weakness lies in the occasionally corny lyrics, which at worst sound like dated motivational posters hanging in a pediatrician’s office, phrases like “Hang in there” and “Listen to your heart” plastered all over. “Together we can/ Together we can do it,” goes the hook for “Ride”, which is a wonderful sentiment, but dumbs down an otherwise musically complex and beautifully crafted Daft Punk-esque dance number.

Despite the vacuous lyrics, the duo hint at a deeper meaning, even on the album’s seemingly simple title. In a press release, Littlemore details the “image of a modern city overtaken by jungle, almost like mother nature taking back the planet.” Littlemore wanted to display “the wisdom that plants can give us about living harmoniously on this beautiful planet,” a goal which doesn’t really bubble up to the surface much, lyrically or musically.

But the content of Two Vines doesn’t need to truly illustrate that concept to succeed. Empire of the Sun have managed to remain steadfast in the sound they’ve carved out for themselves since day one, which can be a challenge for a band that has pushed as big and wide as these two have. Two Vines comes to a close with the album’s best, “ZZZ”, which still relies on heavy synths and more of a Men Without Hats sound, but done in a way that feels genuine to Empire of the Sun’s origins and plays deference to a bygone era, a combination they’ve clearly mastered.