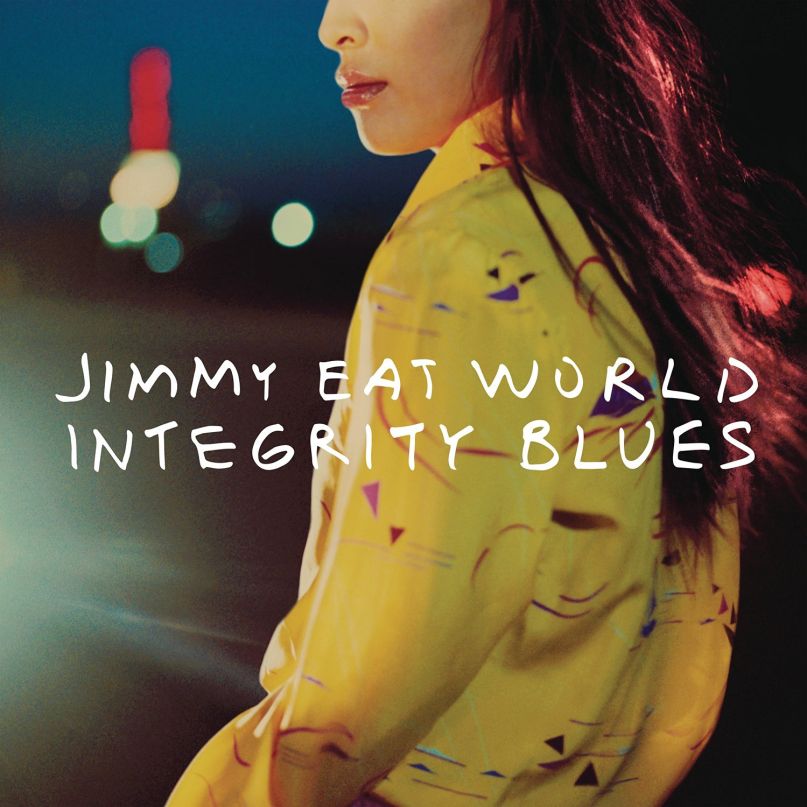 Jimmy Eat World couldn’t have picked a better time to return. They’ve dropped their ninth studio album, Integrity Blues, just as the weather dips into chill and people begin reflecting on their lives, as they are wont to do come the end of the year. Dotted throughout the Mesa, Ariz., band’s career are true spaces of slow-burning contemplation, from the majestic “Goodbye Sky Harbor” to the unspooling thread of “23”. On Integrity Blues, Jimmy Eat World return to that mood of reverie, with often beautiful and quietly triumphant results.

You don’t have to listen to this album to detect its melancholy tinge: the title, Integrity Blues, captures frontman Jim Adkins’ struggles to do the lonely and not immediately fulfilling work of living as a perpetually incomplete person. “Happiness is one of those fleeting finish lines,” he writes in a letter accompanying the album, a rare explanatory gesture for the band. “Integrity matters because if you let the answer of ‘Who do I need to be?’ inform your question ‘What should I do?’, there just isn’t room for that negative cycle to get traction.”

That negotiation with negativity permeates Integrity Blues, which opens with leisurely sweeps of guitar, an airy chorus of voices, and Adkins’ frustrations at a failing relationship. On “You With Me”, he asks, “What makes our love so hard to be? Is it you, or is that you with me?” Jimmy Eat World’s last album, 2013’s Damage, was what the band called an “adult breakup album,” but it was brittle and sometimes strident — a reaction to being stricken with recent pain. On Integrity Blues, Adkins sounds like he’s sitting with the hurt and trying to feel his way through it. On the desperately insistent “It Matters”, he challenges: “I think about us dancing, but it’s not something we do/ Well there’s my dream, doesn’t it sound good to you?” It’s a poignant line shaded with tender bitterness, the type that makes your chest clench if you’re feeling vulnerable enough, the kind that Jimmy Eat World do so well.

Where the peppiness and energy of 2008’s Invented and Damage sometimes felt contrived, Jimmy Eat World harness a distinctly darker, slower sound on Integrity Blues, a vibe they explored on their 2005 Stay On My Side Tonight EP. “Gotta Be Somebody’s Blues” from 2007 album Chase This Light also wouldn’t have sounded out of place here, while “Through” sounds like a phantom Futures track. But this album isn’t a rehash of Jimmy Eat World’s old work. Just take the breathtaking “Pretty Grids” and “Pass the Baby”, which show how the band are still testing the borders of their sound. It makes for thrilling, intimate listening.

There are plenty of oblique Adkins lines for the books on “Pretty Grids”. “There’s a sound that’s true, but the voice is new/ And a half-dancing attempt to learn your name,” he breathes over sandpapery guitar. “All I see is up-close magic,” Adkins croons, and you glimpse it too. “Pass The Baby”, too, moves through different phases: Adkins’ menacingly controlled voice over a low, mildly mechanized drum pattern into twinkling, The xx-esque guitar, and, finally, crisp, cleansing riffage. It throws you for a loop, but it feels wholly earned and, most importantly, great.

In Adkins’ letter, he lays out the nuts and bolts of his self-scrutiny, speaking of disappointment gaps, emotional injury, tantrums, and negative self-worth. It all sounds very open-ended — and it is — but Adkins attempts answers and advice on “You Are Free” and “The End is Beautiful”, the corniest and therefore weakest songs on the album. The latter, with its plucked guitar and chorus of “It doesn’t have to hurt anymore,” harks back particularly to “Hear You Me”. Both songs are reminders that while Jimmy Eat World have always done classic, strummy torch songs well, they find the most genuine emotion in drift and haze, as they do on “Pol Roger”, which feels like the sweet sunrise at the end of the lonely journey of “23”.

Integrity Blues and American Football’s long-awaited return were released on the same day. Clearly, they don’t play the same music, and the stakes are different: Jimmy Eat World have obviously been a far more consistent presence than American Football. But both albums feel like similar landmarks, the art that emerges when musicians take stock of what they’ve done and what they are, and continue to create what is true to them. Adkins has talked about how Jimmy Eat World deliberately pushed themselves out of their comfort zone for Integrity Blues, an adventure that seemed to have helped them find their essence.