Korn – The Serenity of Suffering 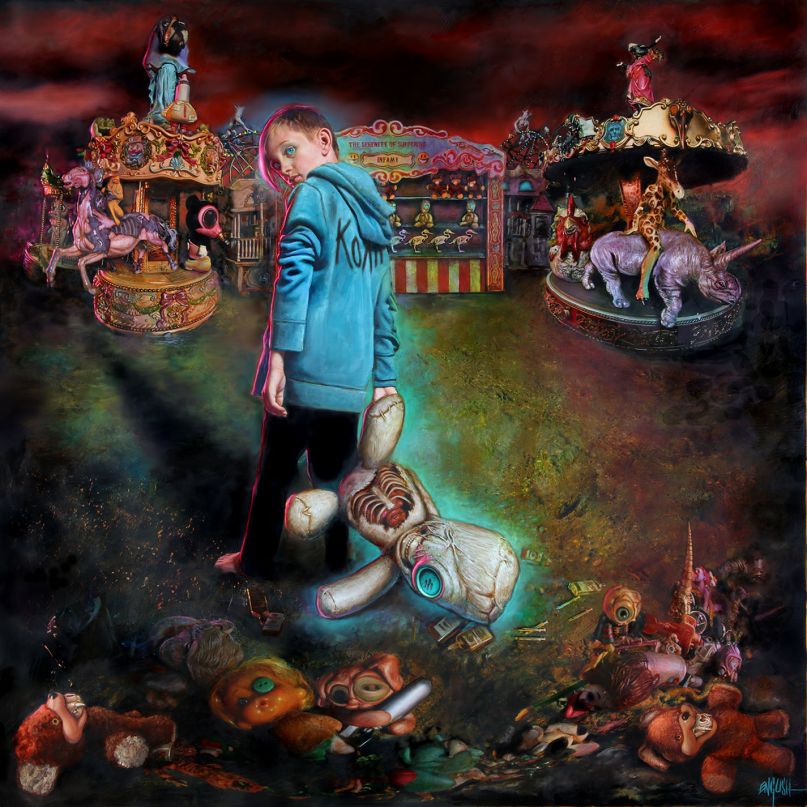 On “Kill You”, the climactic track from Korn’s 1996 sophomore album, Life Is Peachy, Jonathan Davis recalls his stepmother. In interviews at the time the album came out, he referred to her as “an evil cunt,” recalling an incident in which she spiked a glass of tea with “Thai hot oil” and wouldn’t allow him to get up from the table until he had drunk the entire thing. The song centers around the intense hatred that Davis harbored towards the woman, and especially on the violent, sexualized fantasies he entertained about her.

That liminal space between sympathy and disgust, between victim and victimizer — that was where Korn thrived. Even back in the pre-Tumblr days of the mid-’90s, singing about shoving a knife up a woman’s ass was problematic AF, but the pain animating those sentiments was too raw and real to deny. To wax self-righteous over Davis’ expression would be to ignore the helplessness and suffering that motivated it. There was something courageous in those early albums, a willingness to confront the trauma that shaped Davis as an artist and a man, and in the process, to reveal the warped and repugnant corners of his own psyche.

In the decades since their formative albums were released, Korn has traveled through the Sisyphean cycles of reinvention and rediscovery. Korn III was the group’s first attempt to recover the magic of those early records, re-teaming them with producer Ross Robinson and paring back excessive production values that had accreted over the years like layers of barnacle on a sunken ship. The Path to Totality from the following year, however, pulled a complete 180, throwing a grip of electronic producers into the mix. And while its followup The Paradigm Shift did away with all the siiiiiick drops, the former record’s pop sheen clung to it like a cheap cologne.

Now, for their twelfth full-length, The Serenity of Suffering, Korn make a second bid for a “return to form.” It’s the heaviest album they’ve released in a good, long while, with Davis’ growls approaching death metal intensity on songs like “Insane”. The band seems to be making a concerted effort to incorporate sonic references that were once key touchstones to their sound, like the demonic scatting on “Rotting in Vain”. Fieldy’s thick, watery bass lines on “The Hating” and “When You’re Not There” are familiar elements folded into the slicker, denser sound they’ve evolved over the years (although, still missing is a wicked bagpipe solo). Smuggling Slipknot’s Corey Taylor into single “A Different World” adds a comforting harshness into the proceedings as well, providing a long-sought meeting between two of nu metal’s most dominant architects.

For the long-time Korn fan who has weathered the band’s myriad permutations and consistently come away with something to appreciate, Serenity will likely come as a breath of fresh air. It will likely have little to say to anyone outside the church of their faithful. Despite sounding more energized than they have in years, the band is working in an aesthetic that was largely exhausted of new ideas a decade-and-a-half ago. Unlike Deftones, who have spent their career developing and weaponizing the ethereal, almost shoegaze-y qualities that set them apart from their peers (seriously, go listen to this year’s Gore), Korn have gravitated towards the murky middle of the road. Even as they make gestures towards the past, it’s clear that something crucial was lost a long time ago that can’t so easily be recovered. Grooves were important to making Korn a household name, but they weren’t the whole of it; it was the bizarro guitar tones, the spaciousness of the production, the way that Munky and Head’s guitar interplay seemed to exist on a different plane from the percussive thuds of Fieldy’s bass. These elements created an atmosphere of squalor that Nick Raskulinecz’s polished, maximalist production proves unable to capture. Without those textural elements, even “Blind” would have sounded like a cheap knock-off of Fear Factory’s “Scapegoat”.

And Davis’ lyrical proclivities have not exactly aged well. Never particularly adept at crafting imagery or metaphor, he was always at his peak when his artlessly blunt declarations were used in the service of illuminating past trauma. The further away he gets from particularity, the more his songs start to sound like angsty word salads (“The hating/ It’s pulled inside of me/ They’re trying/ To test my sanity” from “The Hating”) or bland daisy chains of cliché (“I used to care, I used to try/ But what’s the use, it always ends with goodbye,” from “Everything Falls Apart”). It’s clear from reading the press materials that Davis wants to delve into weighty psychological territory, exploring his own drive towards self-sabotage and self-destruction. Mostly, he comes off sounding like that one Facebook friend that’s always posting about how everyone else in his life comes with too much drama.

Insanity has always been a central motif in Davis’ lyrics. He’s written about feeling crazy, fucked up, twisted. This tradition carries into Serenity opening track “Insane”, which details the singer’s inner turmoil. But everything here sounds all too perfectly rational and calculated. In lieu of any substantively new ideas, we get more vague declarations of personal pain set to effective if undistinguished riffs. With The Serenity of Suffering, Korn have crafted an album that ups the heaviness quotient over their more recent output, but compared to the harrowing, self-immolating acts of catharsis that dominated their early work, it still feels too safe by a mile.

Essential Tracks: “Rotting In Vain”, “When You’re Not There”