Leonard Cohen – You Want It Darker

The legendary singer's latest prepares us for his departure, but comes nowhere near exhausting his vitality 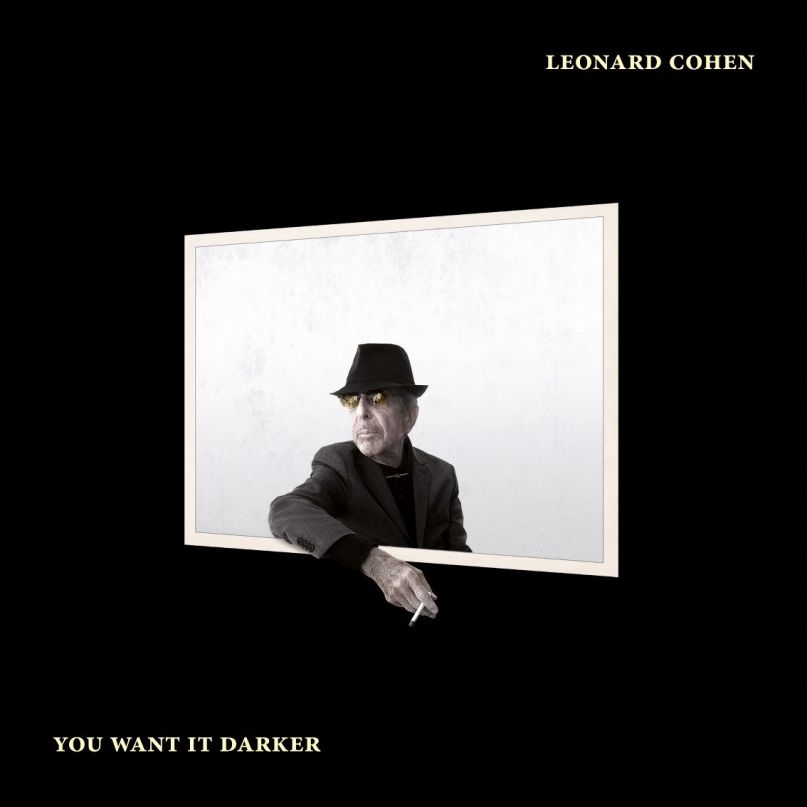 The title of Leonard Cohen’s new album serves as a taunt. It’s a jab at those who expect the 82-year-old poet and singer to just retire, going gently into the good night without a fight. It’s also a treatise on modern culture, particularly fitting for the current presidential election cycle. John Oliver describes us as being “buried alive in the horror that is this election.” Cohen, ever the tidy wordsmith, doesn’t engage in such histrionics. “You want it darker?” he simply offers. The cool inquiry is rhetorical, because who would actually answer in the affirmative? He’s slyly baiting us with our own fears: You think it’s dark now? Just turn on the TV tomorrow morning.

The flip side of these tabloid fodder matters relates to Cohen’s private interior. The unlikely lady killer famously once revealed he aches in the places he used to play, and a week before unleashing his 14th studio album he whipped music fans into a frenzy by declaring he’s “ready to die” in an extensive New Yorker profile. Maybe buoyed by the international panic attack his impending demise caused or his mood merely shifting, Cohen backtracked the grim comments at a Los Angeles listening party. “I intend to live forever … I intend to stick around until 120,” he told the crowd.

The album’s nine tracks tell a different story, however. The songs keep in line with the narrative Cohen laid out in the New Yorker piece about putting his “house in order” before migrating from this earthly plane. A witty couplet (or eight) aside, the album deals in harsh goodbyes. Not entirely welcome, some heave with resignation as others bring a modicum of comfort. “I’m leaving the table/ I’m out of the game,” he sputters in a charcoal growl on “Leaving the Table”. Just two songs prior, he mournfully pleads about how he wishes “there was a treaty between your love and mine” on “Treaty”.

Cohen faces the inevitable while his hyper-articulate contemporaries flinch. Our newest Nobel laureate, Bob Dylan, uses the fluid lines of the Great American Songbook standards to relay his thoughts. Bruce Springsteen, meanwhile, digs into his past to make sense of his present. Our only compass is Cohen. Using his remaining time, he’s not only putting his house in order, he’s tidying up ours too. You Want It Darker prepares us for his departure and, in turn, shows us how it’s done, so we have a road map — pockmarked by land mines as it is — in place when we reach that stage.

In the same New Yorker article, Dylan commends Cohen, with little of his usual deflection, for his melodies, citing them as the songwriter’s “greatest genius.” (And why bother arguing with Zimmy?) Like most of Cohen’s compositions, the focus of You Want It Darker stays rigidly on the lyrics. Yet, notice if you don’t find yourself humming a tune a few hours removed from listening. The stealth orchestrations come courtesy of Madonna’s close collaborator Patrick Leonard, and Cohen’s son Adam runs a tight ship as producer.

If You Want It Darker ends up as Cohen’s last musical will and testament, no distant relative goes without a hefty inheritance. And whether we wake up to a country going along with her or making itself great again on a morning in early November, Cohen’s bare-knuckled insistence that religion, politics, those bound to us by law or sheer will, and even ourselves will fail is a fitting legacy.

Essential Tracks: “You Want It Darker”, “Leaving The Table”