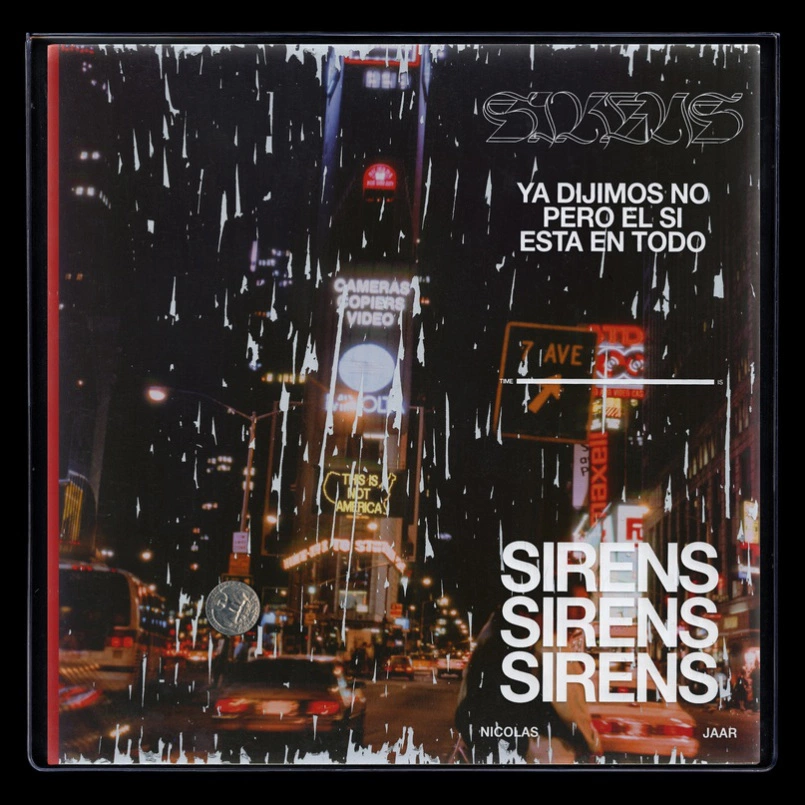 America is flush with loud warnings. It’s noisy and chaotic, a crumbling facade of rights and wrongs and gun wounds; that grows all the more apparent as the presidential election inches closer. During his DJ set at Big Ears this past March, Nicolas Jaar capitalized on that governmental unease. Wall Street calls boomed and a race riot speech played, Jaar welding financial inequality with rampant discrimination particularly well. The crowd stopped dancing to listen. A synthesized sound of America the past and America the present rang like a silent warning, a flashing light with the audio cord cut in two. Sirens, Jaar’s sophomore solo full-length, takes a similar snapshot of our nation, but this time there’s a timelessness in his songs and themes.

Jaar’s brilliance stems from the use of personal past. The audio from a home video of the musician as a two-year-old (filmed a week before he and his mother left for Chile at the beginning of 1993) appears over the course of the album. On “Leaves”, he and his father discuss a statue that cannot be killed because of its size mirrors a discussion of government positions. (As eerie as a contextually reworked childhood home video clip is, it’s symbolism is heavy-handed even if he didn’t know it at the time.) On “No”, his father asks him to tell a story, so young Jaar narrates a bird flying through the air, a man shooting it, walking across a small cake, running into a lion. Then the lion roars. It’s simple, a look at revenge and power, as told through the eyes of a child who has yet to know how impossible it is to break those relationships. The Chilean-American musician positions the dialogue as a puzzle — like the ones where readers must find the subtle differences between two photos. But Jaar is intent on pointing out how few differences there are. Power exists forever, effort hits a cap, and social roles are as set as stone.

The truth is, our country isn’t in the middle of hearing sirens: We’re all busy ringing them, flicking switches, repositioning the flashing lights in hopes that an answer, a savior with the calm of a therapist and the levelheadedness of someone not at the top rungs of political power, will arrive. We’re calling for help, frequently on another individual’s behalf. By looking outward at humanity on Sirens, Jaar looks deeper at himself, the six songs weird examples of dysmorphia where the ally he wishes to be — aiding others in their fight for justice — reveals its true form, Jaar becoming starkly aware of his deep-rooted hopelessness and that his privileges are part of the problem.

Sirens is Jaar’s most political album yet, but doesn’t shove that perspective down listeners’ throats. Opener “Killing Time” spans 11 minutes, much of which is divvied up by silence, flags waving in the wind, and mirrors shattering. A somber piano melody sings to itself, intercepted by sharp electronic bolts and the residue of sonic splicing, Jaar singing about the connection between police murders and the “murdering” of time in failing to change that. Once the double-time electronic thumbs of “The Governor” kick in, he plunges into a need for improvisational dance. “All the blood’s hidden in the governor’s trunk/ They keep you in a hall with all of your ilk,” he sings, going on to compare the government to a blind dealer and consumers as wide-eyed addicts, all placed in a hallway where echoes of praise override thoughts of guilt. Jaar is caught in his own head of failed justice. His political bent mocks: Forget what happened, smile, and see the reflections of the collapsing world through a tear. A saxophone jumps into free jazz to spike the jittery percussion — all drum fills and hi-hat taps — until it subsides in favor of somber piano chords, the album’s theme music used to provoke reflection, the beginnings of resistance and rebuttal smoldered. His repeated note on “No” that “You don’t have to see the future to know what’s coming” feels so natural.

Yet Sirens’ political sighs feel heavy-handed. The absence of morality and the carelessness with which it is tossed aside dominate “Three Sides of Nazareth”, but a single line (“If every now and then you feel like you’ve seen it all/ Then be sure to remember there’s always two sides to a wall”) saves it from being a freshman year realization. Then it becomes clear: everything is straightforward because, for so much of the world, the obvious morals of politics don’t seem so obvious. Closer “History Lesson”, a ‘50s-inspired slow dance, outlines a six-chapter history lesson: We fucked up, we did it again and again and again, we didn’t say sorry, we didn’t acknowledge, we lied, and we’re done. As fingers snap and barbershop harmonies uplift the song’s final line (“Oh, but baby, don’t you decide it?”), Jaar compensates for the obviousness by playing up the cheekiness. Perhaps there’s no other way to deliver a tragedy with no end than with heavy hands that aren’t guaranteed a break.

Jaar uses a bucket of specific references and allusions to illustrate his themes. Ahmed Mohamed, the student who was sent to the principal’s office for a homemade clock mistaken as a bomb, appears in a line. The goals of the Black Lives Matter movement creep into the opening track. Despite a lack of samples (excluding a “song from the Andes mountains” used on “No”), Jaar tips his hat to musicians and movements alike. And yet even with all of his allusions, politics, and references, he structures his music so that those who are entirely unaware, who couldn’t care less about his Underworld pronunciation or Latin woodblock, feel in on the sound. He champions the bridge between spacious bass rhythms and synth-dotted soundscapes with music that revamps the conventional. Bangers “The Governor” and “Three Sides of Nazareth” shift the tempo dramatically, the latter of which recalls the pulse of Suicide, and hence an indie kid’s notification to make a beeline for the dance floor. Even the ambient tone of “Leaves” and its occasional Asian instrumentals incite a sway. Though it seems fleeting, Jaar’s hypnotizing songs cradle you until you reach a point of illumination, a bubble of sound that feels limitless in its elongated, looped second, a dance to softened fragments. You don’t have to understand Sirens to enjoy it, and Sirens doesn’t make listeners feel at odds for not understanding it in full either.

When Jaar crossed into the public eye at age 18 with his mature debut, 2011’s Space Is Only Noise, he didn’t expect to find himself in the spotlight. He’s a busybody bent on scoring films, waxing poetic via DJ sets, releasing glitchy electronica like 2015’s Pomegranates, and bending minds as one half of Darkside. Sirens compares to those past works the way those works compare to each other already: They don’t. Jaar has signature tones — every musician does, and it’s hard to escape them — but he steps past expectations to make a political statement that’s still subdued, jaunty, and sharp. Each time Jaar resurfaces in the music world, it’s with a change of face. That’s what makes his releases such a treat. In time, maybe they’ll impact the very world he fears he’s failing to save.