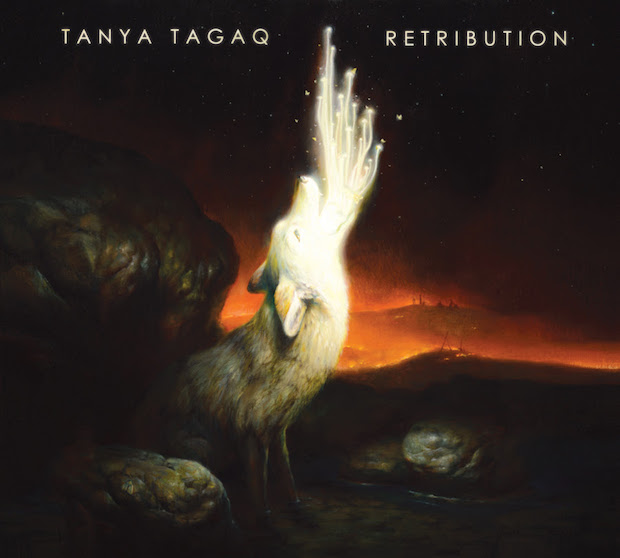 “I’m devastated that this is how we live.” Those are chillingly direct words from Tanya Tagaq, Polaris-winning throat singer. That tragic sentiment comes from an interview with The Globe and Mail, in reference to her cover of Nirvana’s “Rape Me” on new album Retribution, a song she chose as a response to the prevalence of misogyny, abuse, and assault against indigenous women. Tagaq’s music is in fact fueled by a seemingly inexhaustible list of injustices, her traditional-indebted songs addressing ultra-contemporary issues. This blending of past and present, delivered in the rawest way, makes her promise of Retribution that much more powerful.

Non-radio-friendly genres get critical acclaim and even high-profile awards all the time, but it takes a special artist to cross over into more mainstream territory. After 2014’s explosive Animism, Tagaq did just that. Her growls, yelps, and moans tapped into something at humanity’s core, beyond any specific language or genre — though her voice definitely carried similarities to metal and hardcore, her songs sharing the same roots as post-rock and ambient, and her intensity and protest connecting with punk.

Tagaq’s compositions relate to her Inuk throat singing roots, and though the poly-voiced inhalations and exhalations are a unique strength, she can’t be exclusively defined by them, or by anything, really. Retribution scrapes and whittles at the sounds of Animism, as if trying to carve the strengths she’d previously displayed into a more refined weapon.

“The retribution will be swift,” Tagaq venomously insists on the album’s title track, words bubbling forth from the web of percussion, rhythmic vocal breaths, and glitchy electronics. The track feels a lot like Pharmakon’s body horror epic Bestial Burden, though Tagaq’s lyrics about the earth’s “sweet black blood” being pulled out for nefarious reasons and turning “money into god” add a layer of spoken word intensity, her messages on some tracks incredibly concrete.

The tones that the throat-singing tradition can achieve with a single voice are astonishing, exemplified in “Nacreous”, an almost metallic humming tone produced simply by vocal chords rubbing together. Fittingly, Tagaq layers those expressive hums and growls with equally beautiful counterpoints. Her art is both indebted to the beauty and expression of an incredibly specific tradition and focused on the appeal to a beauty that transcends culture.

But Retribution is far more than amorphous, cinematic push. “Centre”, featuring rapper Shad, shows a potential for Tagaq’s voice to stand in for a hip-hop rhythm track, kind of like the ultimate beatbox. While it shows a fascinating new direction for Tagaq to pursue, it fails to fit in with the surrounding album at all. Shad’s repetitive lines about the center of the earth don’t add much, more like a mantric reminder that the earth is a physical entity. The track is nowhere near as thought-provoking as the tracks in which Tagaq delivers criticism, and nowhere near as emotionally resonant as the tracks in which she opts for wordless expression. It’s not a bad track, just a severe shuffle away from the album’s core.

Elsewhere, “Cold” opens with the sounds of footsteps crunching across snow, Tagaq reciting lines about the amount of energy it takes to change the states of water from solid to liquid. Jesse Zubot’s shivering violin scrapes add depth to “Sulfur”, Tagaq’s quickly sputtering noises sounding guttural and desperate, struggling to find some air in the clouding smoke.

That cover of “Rape Me” closes Retribution, Tagaq worn down by the weight of all of the environmental and societal ills she’s struggled with throughout the rest of the album. That’s a lot to deal with. She promised retribution at the album’s open, but at the end still feels the sadness of a dying planet, of suffering women, of her own personal pains. But that doesn’t mean she’s given up. The song fades on a deconstruction of the iconic guitar line, the drum pounding out a slow march, voices whispering and refusing to be silenced.