Irish indie pop outfit dig into the '80s for an impersonal, but professional new album 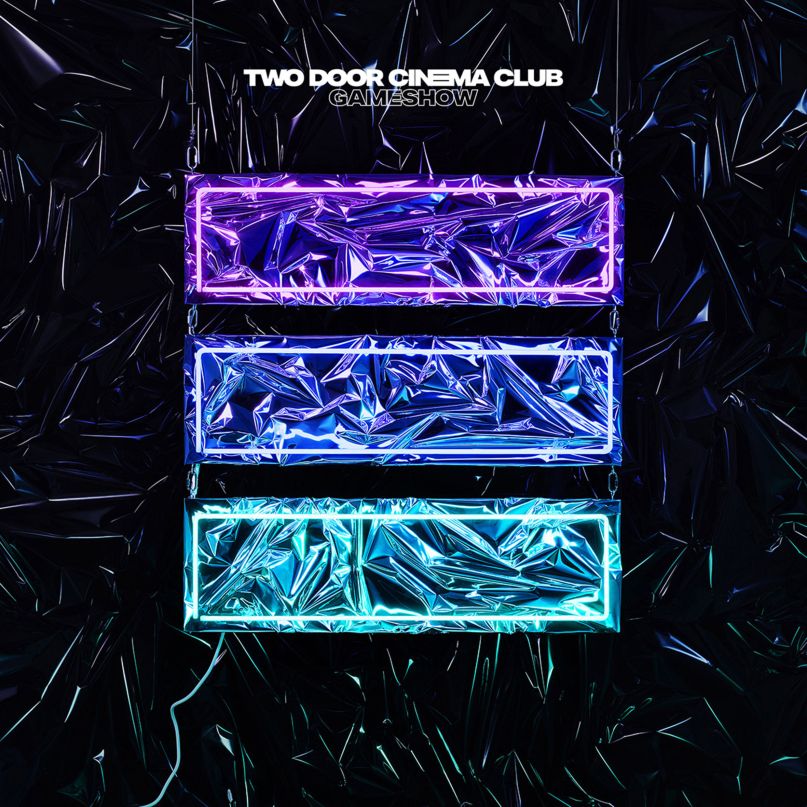 Gameshow is Two Door Cinema Club’s difficult third album, the kind of left turn a band must take because they just can’t afford to stagnate after releasing two good but largely similar records. The success of Beacon in 2012 left longtime friends and bandmates Alex Trimble, Sam Halliday, and Kevin Baird at a personal and creative crossroads, and when they reconvened in 2015 to create Gameshow, they set off on a decidedly different track: ’80s nostalgia.

Contemporary listeners are no strangers to the retro revival of neo-soul, disco, and funk, a movement Daft Punk pulled off perfectly on Random Access Memories. Two Door Cinema Club have been leaning towards these particular genres for a while now; their twitchy but undeniably danceable electropop/rock has long been soul- and disco-adjacent. So, this move makes some sense for the Irish lads, even though it’s a road already trod by others to far more interesting results.

You can’t blame a band for curiously venturing into new genres, but in so doing Two Door Cinema Club lose the emphatic urgency that electrified their hits and made them an act to watch in the first place. Where standouts off Tourist History and Beacon like “Undercover Martyn” and “Someday” went at a rapid clip to get crowds jumping, Gameshow settles for a swaying two-step. After the peppy opener “Are We Ready? (Wreck)” — a track cut from earlier Two Door cloth — comes the meandering, falsetto-heavy single “Bad Decisions”, whose tedium is only interrupted by a spiky, distorted guitar line and a chant vaguely against social media through the phrase “generation information.” The chant isn’t an admonishment, but it also isn’t ironic enough to convincingly parody contemporary digital anxiety.

As on “Bad Decisions” and throughout Gameshow, Trimble retreats to allow layers of tinny synths and squealing guitars more prominence, his vocals staying lower in the mix than is typical for Two Door Cinema Club. His singing loses some of its coherence, especially when he stays in his upper register. The songs, already diluted by the uninspired ’80s vibes and the absence of Two Door’s signature sticky riffs, lose even more personality. Their admiration of Prince and consequent experimentation with sinuous guitar solos give songs like “Fever” and the ballad “Invincible” some energy, but that doesn’t make them fresh. The latter is an unashamed throwback that ends up hilariously antiquated, particularly the melancholic, repeated “I’m a fool.”

The ’80s occasionally look good on Two Door, as on the louche, hip-thrusting “Ordinary”, with its sleazy, indulgent guitar and an agile vocal performance from Trimble. “You say, ‘You’re drunk,’” he sings, his voice hitching on the last word before he completes the flirtation: “I said ‘I know’.” He turns to pleading on the bridge: “There must be something going on, somebody has to know, somebody has to know.” Trimble loses more composure on the title track, which jumps forward in time to channel Bloc Party and The Strokes. “I’m a Lynchian dream, made of plasticine,” Trimble proclaims with bombast. “I’m a Pinocchio, broken nose, let me go.” On this song, Two Door Cinema Club come unhinged, and its manic rock star energy makes it the most memorable track on the album.

The derivative aspects of Two Door Cinema Club’s music have long been a valid point of criticism, and it’s a little disappointing to find that they’ve set down some of the calling cards they’ve developed only to backpedal in time with little to show for it. There’s nothing wrong with wanting to play in a different sandbox for a period of time, but Gameshow is unambitious. Much of it feels like the kind of music that is produced on the way to a truly inspired synthesis of new and old. As a band that formed in 2007 and became emblematic of indie pop in the early part of this decade, Two Door Cinema Club were already sliding towards irrelevance. Unfortunately, Gameshow doesn’t really help to arrest that trajectory.