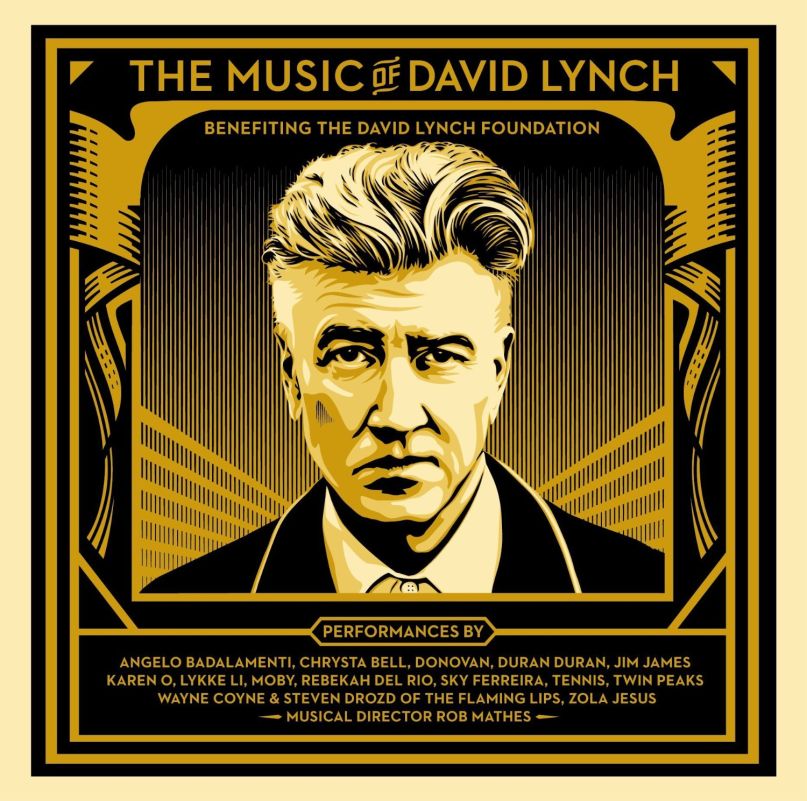 Since the late 1970s, no modern film director has had as significant an impact in the world of music as David Lynch. His eye for the surreal, pairing camp and mundane scenarios with bursts of strange, disturbing imagery, has influenced scores of musicians to indulge their experimental inclinations. He did this through his soundtrack work, simmering, unsettling scores punctuated by repurposing classic pop songs in a stark, unnerving manner. Music plays a key role in Lynch’s works, from scores by Alan Splet or Angelo Badalamenti, works with David Bowie and Trent Reznor, and multiple solo records of his own, he’s released in the past five years. Artists like Annie Clark and Debbie Harry have expressed how Lynch influenced their work, and going back to the ‘90s, indie rock bands like the Pixies and Modest Mouse paid homage through covering “In Heaven” from Eraserhead. While the Twin Peaks revival coming early next year falls in line with the prevalent wave of ‘90s nostalgia present throughout pop culture, Lynch’s influence on alternative and indie rock has been pronounced for decades.

Last October, a group of esteemed musicians — including Karen O, Duran Duran, Jim James, Lykke Li, Wayne Coyne, and many more — came together to play a tribute concert for Lynch, in celebration of the 10th anniversary of his foundation. The evening featured renditions of music used and written by Lynch for his various films and television programs. Without discounting the work of legends like Elvis or Roy Orbison, one of Lynch’s talents as a director was the ability to take classic songs and incorporate them seamlessly into his world, making it so that many will always tie the two together. Lynch’s skill at uncovering the sinister undertones underneath the surface-level pleasantries of suburban life extended to his usage of these staples.

The double-LP recording of that evening features a collection of faithful renditions of the many musical highlights of Lynch’s career. Badalamenti bookends the album with the familiar, foreboding instrumentals “Laura Palmer’s Theme” and “Twin Peaks Theme”, instantly recognizable touch points. Beyond that, the compilation does venture to some of the more obscure stops in Lynch’s career. Texas singer Chrysta Bell delivers a powerful performance of “Swing With Me”, a song from her 2011 solo album that she co-wrote with Lynch. Karen O croons through the dramatic “Pinky’s Dream”, a song from Lynch’s 2011 solo album Crazy Clown Time. Duran Duran offer up their 1982 song “The Chauffeur” because Lynch directed a 2011 concert of theirs that live-streamed on YouTube. Even Moby, who remixed songs by Lynch and vice versa, contributes a house song to the compilation. Casual fans won’t be faulted for not recognizing everything on here.

Few of the artists deviate greatly from the source material. Rebekah Del Rio breathlessly recreates the simple, a capella majesty of Mulholland Drive’s “Llorando”, and Donovan captures the exaggerated pomp of Nicholas Cage serenading Laura Dern with “Love Me Tender” at the end of Wild At Heart. Some of the best interpretations on the record are the ones that play it safe, performed by artists whose style is a natural fit for the director’s vision. Sky Ferreira’s “Blue Velvet” is quiet and piercing, and Lykke Li’s “Wicked Game” suits the Swedish singer’s entrancing swagger. Jim James adds a bit of country twang to Twin Peaks’ “Sycamore Trees”, lightening the song’s grave undertones. In a surprising turn, indie rock acts Tennis and Twin Peaks, team up for a take on “In Dreams” that blends the former’s strength at ‘60s pop and finds the latter in a moment of rare restraint. Those paying tribute keep Lynch’s penchant for not breaking but adapting classic songs, with winning results.

There are instances of experimentation, as Wayne Coyne and Steven Drozd of the Flaming Lips mold a suite which combines sounds from Eraserhead and The Elephant Man, a subdued, almost ambient piece that recalls their instrumental work on Christmas on Mars. Unsurprisingly, the concert’s finest moment comes from the most affecting composition in the Lynch catalog, “In Heaven (The Lady In the Radiator Song)”. Zola Jesus’ booming voice turns the brief tune into a thunderous power ballad without sacrificing the quiet tragedy that makes the original so moving.

(Read: Ranking: Every David Lynch Film From Worst to Best)

Lynch could always spot the bizarre and tortured elements that lie just on the outskirts of the familiar, and this respectful tribute honors that with simple covers. It’s comprehensive to a fault, but indicative of the disparate musical paths Lynch has ventured over the past 40 years. His appreciation for how music and film coexist is staggering, and only someone with a complete mastery of their craft can leave the impact that the director has. As an attempt to recreate some of the classic moments he’s conjured, The Music of David Lynch is a fitting tribute.

Essential Tracks: “In Heaven (The Lady In the Radiator Song)”, “Blue Velvet”, and “In Dreams”