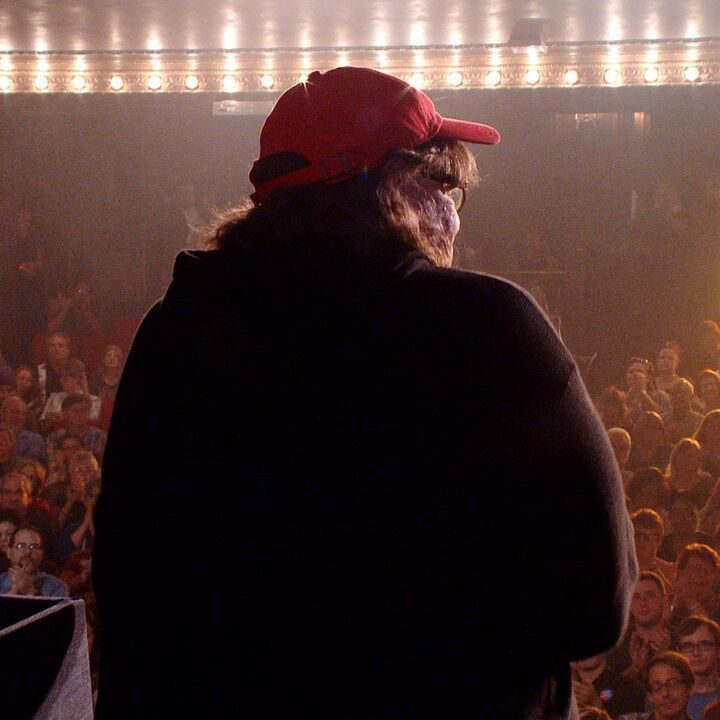 After watching Michael Moore’s surprise movie Michael Moore in TrumpLand, it becomes clear that its title was created more for SEO purposes than as a summarization of its content. Still, it’s clever, and not entirely misleading: Moore filmed this one-man show in Wilmington, Ohio, a hotbed of support for Republican presidential candidate Donald Trump. Wilmington is most certainly “TrumpLand.” But while it spends much of its early going ribbing Trump and his supporters, the majority of the project is devoted to humanizing and contextualizing Democratic nominee Hillary Clinton. The end goal is most assuredly to secure votes for her, but the more affecting plea of Moore’s movie is a cry for basic human compassion.

Moore’s built an entire career on being a loud, attention-grabbing leftie, so his anti-Trump stance isn’t a surprise. What is a surprise is Moore’s clarification that he’s never been a Clinton supporter — “Bill was a very conservative Democrat,” he reminds us. And he’s also been very critical of Hillary throughout his career; he spends a good chunk of the show breaking down his own problems with her political machinations, while also finding time to dissect how she speaks on those decisions now. He even asks the audience to shout out their issues with her, which he responds to with logic, intelligence, and authority. It’s here the film feels most coherent; there are minimal hijinks, an emphasis on facts, and most importantly, the audience is 100% engaged.

Before he reaches that part of the night, however, he spends a good chunk of time angling for laughs at the expense of the Trump supporters in the audience. Saying he wants to make them feel comfortable, Moore points out how he had staff separate all the “Muslim and Muslim-looking people” and “Mexican and Mexican-looking people” and put them in the balcony. There, he has a cardboard wall built around the Mexicans as a drone hovers above the Muslims. It’s good for some cheap laughs, but ultimately pretty hacky, indicative of Moore’s antics at their lamest. That he opens the film with interviews with a series of slack-jawed Trump supporters who spout deeply misinformed opinions about both Clinton and their candidate just further fuels the idea that he’s simply here to mock those with whom he doesn’t agree.

But then Moore shares what he found to be Trump’s most human and affecting moment of the election. At a rally in Detroit, Trump said he sought to prevent local auto manufacturing jobs from going to Mexico by charging a 35% tariff on cars coming back into America. Moore admires the hell out of Trump’s gumption in this moment, and allows the lefties in the audience to separate Trump, at least for a moment, from the cartoon they have in their heads. This is what both sides of the political spectrum do in every election (though especially this one): we deify one candidate by dehumanizing the other. With TrumpLand, Moore simply wants to remind us who these people are, while also elucidating why people want to vote for them.

That said, Trump is all but forgotten by the halfway point of the film. From then on, TrumpLand cycles through a series of arguments in favor of Clinton’s candidacy. Some are deeply affecting, such as Moore’s reminder that Clinton’s fight for universal healthcare in 1993 was met with scorn and personal attacks on her character. Using facts plucked from his 2006 documentary Sicko, Moore yanks on the heartstrings to again remind us what a travesty our current healthcare system is, all while emphasizing Clinton’s attempts to fix this problem and the hell she had to go through in doing so, only to be met with failure. Shots of the audience capture copious tears. Never let anyone say Moore doesn’t know how to rile us up.

Moore’s sensationalism derails other arguments, however. He spends an interminable amount of time cracking wise about the death of Vince Foster, and a prolonged bit about the first time he met Clinton is sweet, but doesn’t add up to all that much. Also, I never, ever need to hear Moore say, “Bye, Felicia!” again.

TrumpLand is a valuable film for the open-minded, undecided voter, or those who can’t seem to reconcile their seeming dislike for Clinton with a vote for her; an extended rant on likability in politics is especially effective. But even in Wilmington, the real TrumpLand, the crowd reveals themselves to be more filled with Clinton supporters than Trump ones. As with most of his latter-day films, Moore will more than likely be preaching to the choir with this film, but that doesn’t diminish its value. Because, ultimately, TrumpLand calls as much for decency as it does votes. And don’t we all need more of that in this election?