Barry Jenkins' film is its own singular creation, one that is unique and unmissable 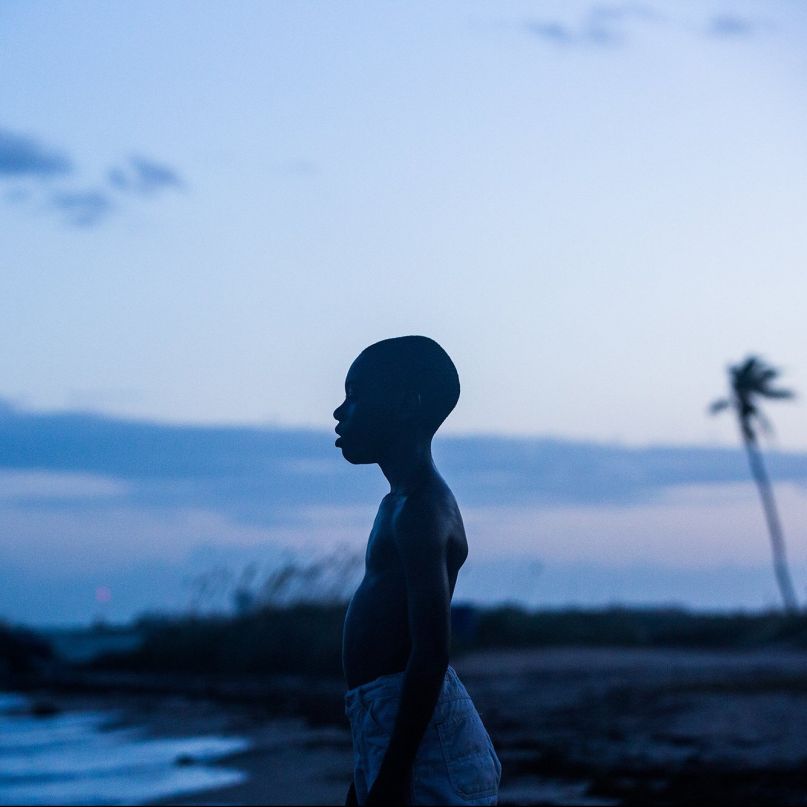 The following review was originally published as part of our coverage of the 2016 New York Film Festival.

The weight of things unsaid hangs heavy in the air. Chiron (Trevante Rhodes) shows up unexpectedly after receiving an unexpected phone call from his childhood friend, Kevin (Andre Holland), who now works as a cook. Kevin remembers his former classmate as a skinny, fragile thing — like a bird with a broken wing — and is surprised by the hardened man, now a fortress of thick muscle, who appears in the doorway. “Who is you?” Kevin asks, startled by Chiron’s gold grill, expensive car, and flashy chain. Chiron says that he is no one but himself, but with the memory of a fleeting kiss he shared with Kevin years ago still lingering on his lips, it’s clear Chiron still isn’t sure how to answer.

Barry Jenkins’ Moonlight is a masterful queer coming-of-age story told in three parts — in which coming to know oneself is painful, like a closed fist forced open. The audience first meets Chiron as a shy nine-year old, played by Alex Hibbert, running from a mob of his peers. He meets Juan (Mahershala Ali), a kind man whose compassion seems to contradict his profession. Juan is a drug dealer in Reagan-era Miami who finds Chiron helpless and unwilling to speak. He gives the young boy a place to stay for the night, as well as a respite from his crack-addicted mother, Paula (Naomie Harris), who happens to be one of Juan’s clients.

As time passes, things come into focus. As Juan develops into a role model to the young boy, Paula — worried that Juan is trying to replace her — confronts him about the reason the other kids terrorize Chiron. She says she can see it, that faint hint of difference in his walk. The word is left unspoken until Chiron brings it up at the dinner table. “What’s a faggot?” he asks. Juan, his eyes a depthless reserve of tenderness, becomes the first person to accept him for the man he will become someday. “It’s something people say to make gay people feel bad,” Juan replies.

This tolerance is a stark contrast to the harassment Chiron faces at school. Terrel (Patrick Decile) taunts the young man, now a 16-year-old high school student, during class. Among other things, he comments that Chiron forgot to take out his tampon. A portrait of a bully as a young sociopath, Terrel stalks the campus looking for prey, but his searching eyes suggest that there may be more to his fascination with Chiron than he’s willing to face. Ashton Sanders (Straight Outta Compton) plays the teenage Chiron as a tangle of scar tissue, his caged demeanor a learned behavior after a lifetime spent worrying about what others might do to you. It’s only Kevin (Jharrel Jerome), a classmate who boasts about screwing other girls in the hallway to mask his obvious interest in Chiron, who sees through the damage.

This is a very different portrait of young male adolescence than Boyhood, which also traversed time to tell the story of a life unfolding. Richard Linklater’s film was hazy and impressionistic, framed as a series of small details that take on a profound resonance, whereas Moonlight is angry and impassioned. That film’s protagonist was a relatively carefree youth, but Chiron carries the weight of the world on his shoulders. How can you hope to find yourself if there’s nowhere where you can be free?

Through the torrent of struggle, there are glimmers of hope. Teresa (Janelle Monáe), Juan’s girlfriend, offers Chiron support and love after his mentor passes away. The reason is undisclosed, but given Juan’s line of work, the details are perhaps unnecessary. His budding romance with Kevin, which begins on a secluded beach as the two boys share a joint and look out on the vast expanse of dark ocean, offers a glimpse of a better life. Those dreams are cut short when Terrel bullies Kevin into fighting Chiron. His classmate begs Chiron to give up, but the boy stands there and takes Kevin’s blows, used to the pain by now. Filmed in a bravura tracking shot, Chiron strikes back — with devastating consequences.

Under Jenkins’ direction, Moonlight is both haunting and poetic, a bittersweet elegy for what could have been. His unflinching camera, which tends to follow the film’s characters like a ghost, gives the film a startling immediacy and emotional power. This wouldn’t be possible without the stellar performances of his cast, including a feverish breakout turn from Harris. Best known to American audiences as Moneypenny in Skyfall, the British actress depicts Paula, who turns tricks to fuel her drug habit, not as a monster but as a victim of circumstance. When her boy grows into an adult, Paula — now in a rehab facility — asks for a forgiveness that may be impossible. It’s a reminder that, as Stephanie Zacharek once wrote of Debra Winger’s icy turn in Rachel Getting Married, “bad mothers are people, too.”

Adapted from Tarell Alvin McCraney’s play In Moonlight Black Boys Look Blue, Jenkins’ film is already being compared to Brokeback Mountain, another story about a thwarted gay romance. In truth, Moonlight is its own singular creation, one that is unique and unmissable. The stories of queer men of color have seldom been depicted with such grace or depth on screen, especially the overlapping burdens of being gay and black in a country where non-white bodies are treated as disposable. (It’s worth noting that Moonlight is screening at the New York Film Festival amidst video of Terence Crutcher, an unarmed black man killed by police in Tulsa, Oklahoma, surfacing on the Internet.)

Moonlight, one of the very best films of the year so far, is a reminder that underneath our pain, each of us want the same things — comfort, shelter, and a space in which we can be ourselves. In the final moments of Moonlight, Chiron reveals that no one has touched him since in the decade since that fateful day, when he and Kevin imagined a world without cages. He longs for the tenderness he has missed. Moonlight may not give Chiron a key, but it offers queer black men something just as important: an all-too-rare portrait of their humanity.