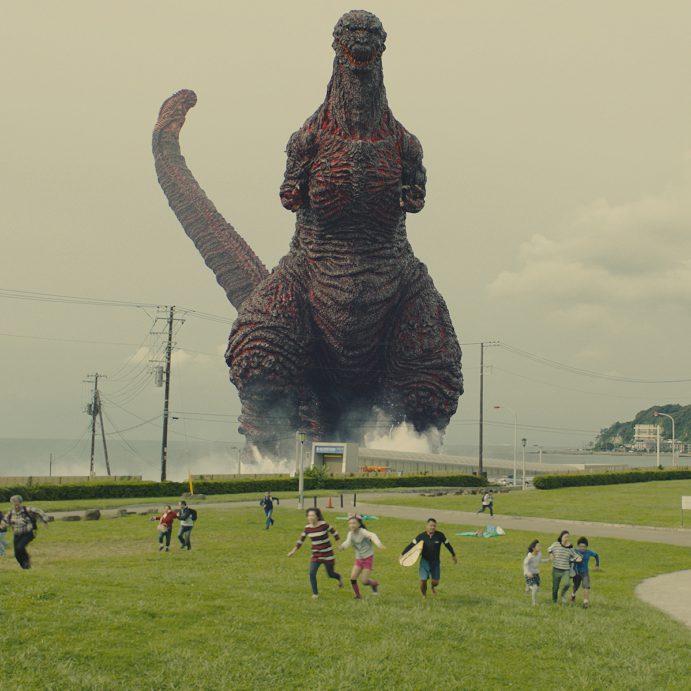 Shin Godzilla finds the famed seaborn creature, now at 62 years of age and counting, at the intersection of a great many eras of both film and history. Though the kaiju subgenre has seen itself lovingly revived in recent years, thanks to everything from Pacific Rim to Attack on Titan, the world has changed since Gojira first appeared in 1954 as a means of reckoning with the nuclear conclusion of World War II. It’s fractious, now. Governments look to protect their own people, if they can even do so, and often it’s at the expense of some other government’s people. The monsters we fear are often less extraterrestrial or supernatural, but instead the monsters of human nature. We have more things to worry about than giant monsters rampaging through our cities.

And yet, at its best, Shin Godzilla makes a tangible, unsettling case for how worried we should still be about giant monsters rampaging through our cities. Already a hit in Japan (it’s the highest-grossing domestic production of 2016 there), the film is being released in the U.S. for a limited run in the midst of the kind of social tumult that tends to engender the best Godzilla movies. As you might expect of a Godzilla film, it’s something worth seeing on the biggest possible screen you can find, with the biggest possible audience you can find.

The 31st entry in the canon functions as a reboot, witnessing Godzilla’s first invasion of Tokyo through a dramatically pragmatic view of what exactly would happen if a monster set out to decimate a modern society. The film wastes no time with the “maybe it’s our friend!” moralizing of some Godzilla films; outside of some religious sects forming around the invasion to repent, seen only in brief, Godzilla is treated without dispute as a walking nightmare, a destructive and seemingly unstoppable terror. The film’s early minutes function at a blistering pace, running through more officials and deputy officials of ministries than most will be able to remember as the government struggles to figure out what Godzilla is, what’s to be done with it, and only after it’s well beyond too late to undo the damage, how to destroy or even impede it.

Directors Hideaki Anno (Neon Genesis Evangelion) and Shinji Higuchi (the live-action Attack on Titan films) frame the coming of Godzilla as an apocalyptic event in the most practical ways. While the film’s digital effects work manages an admirable sense of destructive scale, the real power of Shin Godzilla is in the film’s satiric leanings, which start with the early barrage of dual subtitle tracks (one for the onscreen dialogue, another at the top of the screen for the obsessive cataloging of every character’s name and governmental department title) and quickly extend on to the methods used to subdue Godzilla. Nothing happens in the film without a panel hearing of some kind, and major players are often reminded of their relative place within the pecking order. One early public conference and hearing is actually abbreviated with an onscreen title of “following abbreviated” just to illustrate how much more red tape exists in the film’s universe before anything can or will happen.

In the film’s view, the invasion of Godzilla would be accompanied by an overwhelming amount of bureaucratic handwringing. Anno’s screenplay is barbed (and wholly unsubtle) in its attacks on a Japanese government that looks to follow protocol even when an unimaginable event has occurred, argue instead of act at every turn, and threatens to kowtow to the United States’ unilateral demands in return for help. (Anno has quite a bit to say, early and often, about U.S. involvement in other nations’ disputes.) The film’s observations about diplomacy come from a deeply cynical place, and one that Shin Godzilla effectively cuts with the kind of horrifying destruction expected of a Godzilla movie. The film’s allegorical impact only grows stronger as it moves on, as increasingly severe deterrents solve nothing and every minute spent gaining clearances is another ward of Tokyo being demolished in an instant.

Shin Godzilla is in every way a Godzilla film for the modern era. Given its reboot status, the instinct of many will be to draw parallels between its approach and that of Gareth Edwards’ 2014 update of the property, but Anno and Higuchi’s film manages to fill the human moments with something far more engaging than that film’s frequently generic battle heroics. If anything, the closer parallel lies within the other popular crossover franchise with which Higuchi was involved: Attack on Titan. While that series’ live-action adaptations are … not great, Shin Godzilla derives much of its most effective drama from some of the things that show does so well: revolting character designs, pointed social commentary, the overwhelming sense of grief and loss that comes with every new invasion, and the sense that even the small victories will mean little before long. By the time this new Godzilla starts to glow purple with nuclear power for the first time, Shin Godzilla more than capably makes the point that Japan will be devastated whether the monster is stopped or not.

It’s a nihilistic notion, if fully on-brand for a creator of Evangelion, of what Godzilla would do in our world. The film’s power doesn’t emerge from any one showstopping moment (though that first nuclear ray, and the film’s surprisingly intellectual climax, make for the kind of destructive popcorn entertainment fans will crave), but instead from its larger ideas about what it means to unite the modern world, and whether that might truly be possible at this point. Anno sometimes takes a heavy hand in his approach to the material (the film features a glowing discussion of how “spreading information works” in the global search for a quick way to stop the monster), but it’s one that he approaches with conviction. Shin Godzilla spends far more of its runtime immersed in the legal struggle to save (and possibly nuke) Japan, and what it would take to do either of those things, for better or worse. Which it is, well, that will depend on the individual viewer.

The film’s approach to diplomacy is bitter, but also optimistic. Godzilla’s appearance comes at a staggering cost, and it’s one the film treats with an unusual (for the series) sense of gravitas. Yet Anno imagines a world beset by horror that rises to its best self, that sets aside petty quibbling over time in pursuit of the broadest greater good. It’s an unconventionally hopeful monster movie, even as it drags the forces of non-progress through the mud in so many furtive government meetings. And if the film often takes an aggressive approach to driving this central thesis home, Shin Godzilla manages to negotiate a difficult balance between delivering the monster movie thrills promised by its central creature and a film that utilizes those thrills in service of something more substantial.

But hey, let’s talk Godzilla itself if just for a moment. Higuchi and Anno (from Mahiro Maeda’s design) envision a creature that, unlike so many reptilian interpretations, feels truly monstrous. Performed through a mixture of motion capture, CG, and puppet work, the creature is in every way the kind of burnt, perverse monster it’s supposed to be. Though its fetal form (complete with googly eyes) is fairly ridiculous, the film ultimately transcends snarky takedowns by offering a true horror, from the sea and born of man. For one, Godzilla doesn’t just look like a weird dinosaur (thanks, Emmerich), but a destructive mass of evil. As it should.

We’ve talked quite a bit about Shin Godzilla without even acknowledging the film’s performances, and this is because they’re unusually secondary for a big-budget disaster movie. While they’re often very good, particularly Hiroki Hasegawa as an embattled cabinet member racing for a solution and Satomi Ishihara as an American emissary struggling to negotiate the labyrinthe politics of the inner government, Shin Godzilla is less about any one character and more about the overarching sense of divine terror instituted by a real-world kaiju attack. Sometimes it’s as propulsive a monster movie as has been released in years, sometimes it’s frustrating in its unwillingness to move beyond its grander political implications. But in any case, for the first time in a good while, Shin Godzilla is a true-blue Godzilla movie, and suggests that perhaps Toho has found its best way into a new era, and might have the chance to continue to offer cautionary warnings for generations to come.