The latest Madea film lands few of its many jokes, and none of its hokey life lessons 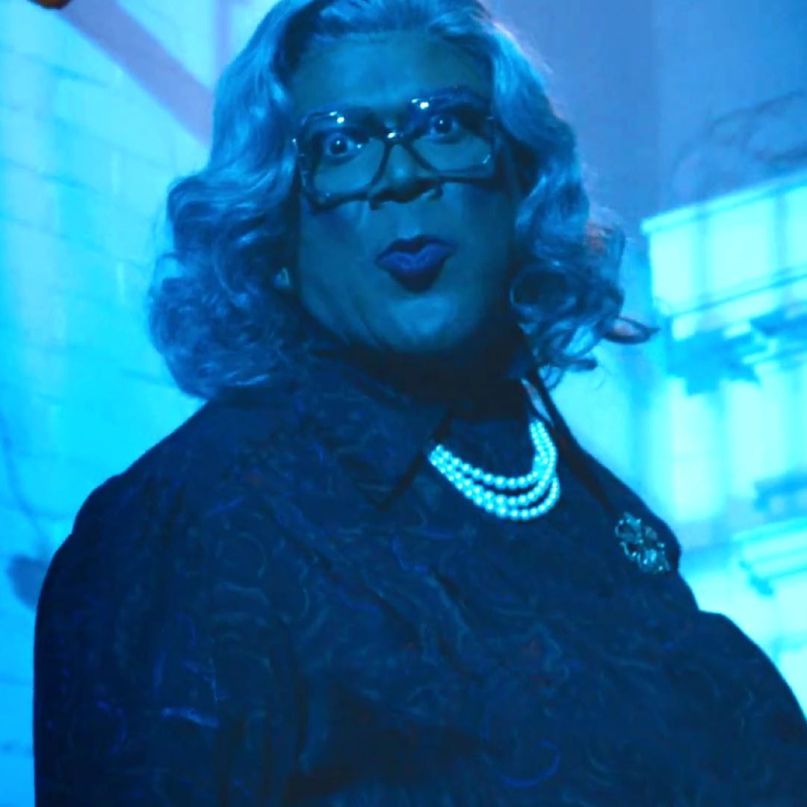 Tyler Perry intends to break you down into liking, or at least tolerating, his comedies. Repeated jokes. Aggressive dialogue. Plotting so big and fast that you won’t be able to stop and point out the chasm-sized holes. Criminy, the latest title alone – Tyler Perry’s Boo! A Madea Halloween – is exhausting enough to leave viewers going, “alright, alright.” It may be obnoxious by any and all practical standards, but Boo! does all it can to cast a certain overbearing spell just the same.

This exclamation characterizes Perry’s comedy to a T. Bombastic. Loud. Unabashed. And so committed to its silliness that after a point, the condoning of child abuse becomes secondary. Perry loves loud, goofy words, and funny ways of saying them. No one’s going to hit anyone in this film. It’s all talk. Lots of it. After that hammer harangue, there’s 90 seconds of talking about whooping ass. “WHOOP THAT ASS,” Joe and Madea suggest. Brian’s discomfort is part of the comedy. He’s the Margaret Dumont to Madea’s Marx brother. Oh, and then Madea suggests giving Brian’s daughter a ‘lil ‘ol “love tap.” Like a light spanking. Approximately 15 times. And eventually, the exhaustion breaks the viewer down into a state of bemusement over Perry’s strains for laughs, if nothing else. So there you go. Don’t like all that? Don’t see this.

Happy Hellurween from Madea, everyone.

What was once an in-joke in a Chris Rock film is now a semi-legitimate farce from that workaholic Perry. This is his 10th theatrical release starring Madea, his most famous creation, the “pistol-packing granny” of the mid-2000s that emerged to fame and high profits with low-budget releases coming practically twice a year. Like a slasher franchise with a dubious killer coming back again and again, Madea has returned, and she’s as bad as ever. Bad in temperament. Bad and barely better than the film surrounding her.

The story? Brian’s a henpecked single father with two teenagers living on a college campus. His 17-year old daughter, Tiffany (Diamond White), in particular, is a handful. She’s a “mean girl,” happy to belittle Dad, disobey him, and even take off her school uniform before getting home just to spite him! And now, she’s fixing to attend a frat party to mingle with suspiciously old-looking college boys while wearing provocative Halloween costumes. That’s cold. Better call in Madea, who brings along her crew of fogies including Joe, the pot-loving Aunt Bam (Cassi Davis), and the intentionally hard-to-understand Hattie (Patrice Lovely).

The rest is a series of “Madea vs.” scenarios. Madea provokes Brian into taking a firmer hand with his daughter. She fights with Tiffany over curfew, and tries to keep the young girl from going to that party. Madea squares off with frat boys. Madea imparts lessons about pranks, respect, loving Jesus, and not being wicked on Halloween. Some evil clowns here, some dumb jock jokes over there, all within a “spooky” body and Perry’s signature predilection for the lowbrow.

Yes, this is as slapdash as any other Perry production. It just is. You can ding it on issues like the camera being out of focus (this actually happens). Or the logistical peculiarities of frat antics (they have the commitment to organize as a zombie mob in the woods at one point?). Or Perry’s cumbersome writing. But that last thing is Perry’s best and only defense in Boo!. This is another bad Perry film, but a curiously verbose one with jokes piled atop more jokes.

This is a farce. A slightly dramatic one, but a farce all the same, though it isn’t a horror parody in the traditional sense. There are no real ghosts or monsters, aside from some references to other movies. Instead, Madea simply has an experience and imparts lessons, using themes related to a certain holiday. Forget those and try to enjoy the few jokes that do land. When Madea loudly compares a fight between Aunt Bam and a trick-or-treater to Biggie and Tupac, it raises a smirk at the least. Perry’s successes, though few and far between, lie in the humor. And Perry works so damn hard, throwing so much out there, that in the end you might at least sweeten to him, if not his movie.