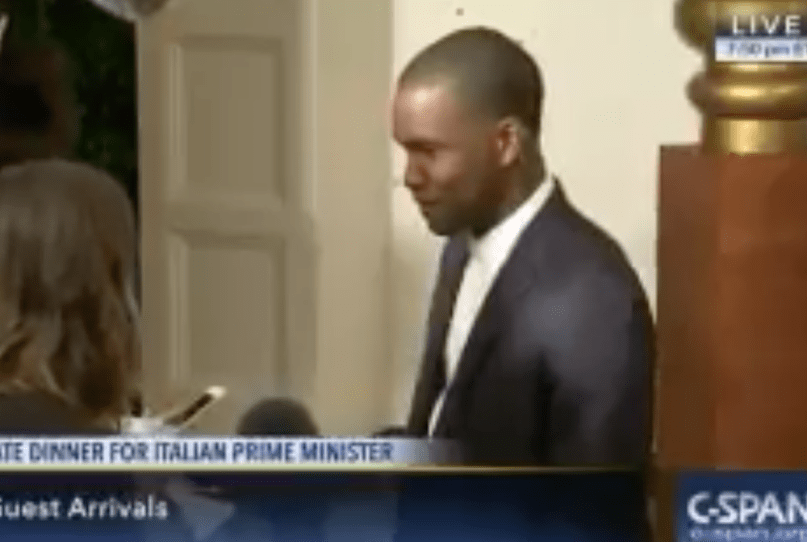 Frank Ocean is to R&B what Tool is to alternative rock — an elusive, unpredictable artist who operates entirely on his own schedule. He released an album (or two) out of the blue, built a random staircase just cause, and even intentionally skipped out on the Grammys. It should come as no surprise, then, that the very first interview the crooner gave in three years was not for the New York Times nor Rolling Stone, or any traditional publication for that matter, but on … C-SPAN.

Upon arriving at President Obama’s final White House State Dinner last night, Ocean was stopped by members of the press for a quick 90-second chat. They questioned him about his distinct attire (checkered Vans) and also asked what he was most looking forward to discussing with POTUS. “Asking him if he had fun these last eight years,” he replied, “and congratulate him, too.”

One reporter also inquired whether he’d follow in the footsteps of Elton John and Katy Perry by throwing a concert to support Hillary Clinton. “Probably not,” he answered, stopping short of explicitly backing the Democratic nominee. I guess if there were ever a place for Ocean to break his press silence, it would be during an event to honor the hippest Commander-in-Chief the White House has ever seen.

Watch the interview below (’cause who knows when he’ll give his next one!), followed by pics of his full outfit that night: