What We Can Learn from Harry Belafonte’s Activism 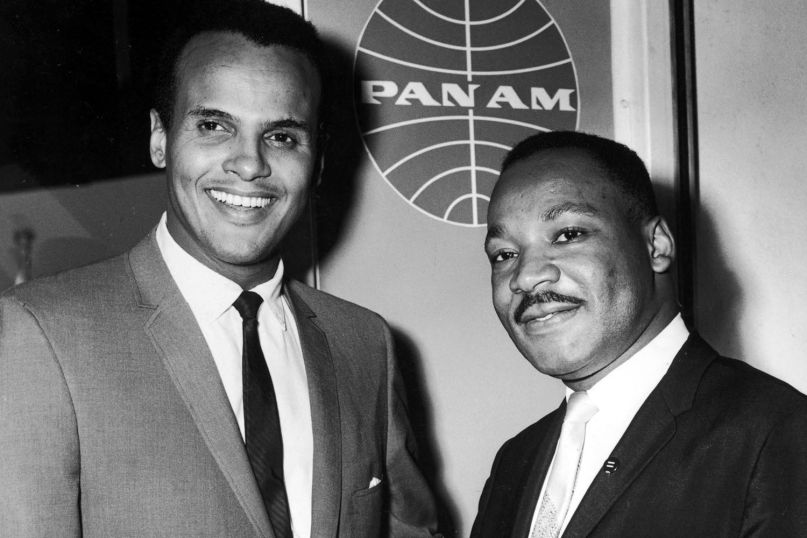 Jampaign is a monthly column in which Mandy Freebairn explores where music and politics collide in unique ways. This month, she discusses how Harry Belafonte’s activism should serve as a model for other artists.

In the age of the 24-hour news cycle and the solidarity profile picture, the question of what counts as activism is certainly a pertinent one. With each unfolding tragedy, artists and politicians instantly offer their sympathies via a tweet or a Facebook post. Pervasive issues in our society are mentioned briefly in awards acceptance speeches or touted in clever slogans on a t-shirt in paparazzi photos. With so many avenues for expressing one’s beliefs and opinions, it’s hard not to fall victim to so-called slacktivism (as the video below clearly illustrates). This might not be a devastating problem for everyone, but when it comes to successful artists with large spheres of influence, expressing opinions and not backing them up with action sets a dangerous precedent.

Though it might’ve become increasingly relevant in the last few years, the argument about art and politics is an age-old, philosophical one. Toni Morrison once said, “All good art is political.” This might be true, but when dealing with ongoing political and social struggles, we must then confront the question of whether political art is enough to make a change. At the risk of over-quoting, Tom Stoppard has said that, upon seeing a fight outside one’s window, “the least useful thing you could do is write a play about it.” Whether or not you agree with Stoppard, it’s hard to disagree that good political art is always enhanced by complimentary action. No musician exemplifies this fact better than Harry Belafonte. Looking back on this month’s Many Rivers To Cross festival, a self-described “festival of music, art and justice,” consider Belafonte as a model of successful artistic activism.

Belafonte recently sat down with The New Yorker’s Jelani Cobb to discuss the state of social justice and its relation to the music world today. “I don’t know how you can ask citizens of color who are born into poverty, ‘when did you become an activist?’” Belafonte says. “You really become an activist the day you’re born because your whole effort is to get out of poverty, and that requires a lot of work.” The notion comes across clearly when looking at Belafonte’s life. Whether it was bailing Martin Luther King Jr. out of Birmingham Jail in 1963 or meeting with Fidel Castro to ensure a place for hip-hop in Cuba in 1999, he has spent the bulk of his career being active in the causes he supports, fighting issues that he has personally experienced.

Not only has Belafonte spent his career championing important issues, but he has also set up institutions to fight on behalf of these causes for years to come. Along with his colleagues and family, he has founded several social justice organizations. Sankofa, which launched Many Rivers To Cross festival, enlists artists to work with grassroots organizations to fight issues like mass incarceration and income inequality. The Gathering for Justice, founded by Belafonte in 2005, is a nonprofit dedicated to fighting child incarceration and racial issues as they pertain to the criminal justice system. Belafonte has set these organizations up to grow far past him, involving entire communities of artists and grassroots activists.

These initiatives make the difference between a socially conscious artist and a true activist. Harry Belafonte’s activism steps beyond him — through strong delegation and good organization, he has largely removed himself all together. Having a public platform is extremely valuable to a social cause, but it is equally important to know how to use it. It is not enough to speak for a cause — at some point, one has to let the cause speak for itself. Harry Belafonte (and other artists like him) not only knows the value of his platform, but he also uses it wisely. He contributes at least as much in resources to human rights initiatives as he does in public promotion. Maintaining this balance ensures that a cause does not get eclipsed by the star who champions it.

This isn’t to say that raising awareness isn’t valuable. Indeed, if you are lucky enough to have a certain amount of public influence, it is arguably your duty to use that influence to advocate on behalf of those who do not. Raising awareness is a big part of that advocacy, but it certainly isn’t all of it. Be it through a tweet, a speech, or a well-crafted Instagram caption, waxing poetic to an audience about a social cause does little in absence of real action.

However, that doesn’t mean every famous musician needs to reinvent “We Are the World.”

Planning fundraising events, directly financing an organization, hosting benefit concerts, and good, old-fashioned grassroots organizing are all ways that artists can use their platforms to make a real difference. At the core, it is the careful balance of action and awareness that makes a true artist activist. Harry Belafonte knows this, which is why he has stepped out of the spotlight of the organizations he’s set in motion — making change is as much about elevating others’ voices as it is about using one’s own. We should be wary of slapping the activist label on every musician who partakes in a hashtag campaign, lest they eclipse the individuals and communities in need of real help. Otherwise, Harry Belafonte will be knocking on our door to show us what a real artist activist looks like.