Los Angeles may have changed, but heartbreak remains timeless 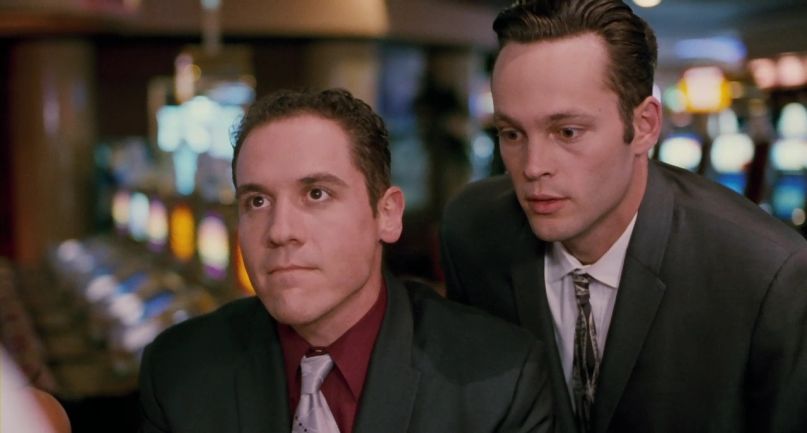 The numbers don’t really do the film justice. Sure, Swingers only grossed $4.6 million during its theatrical release, which began on October 18th, 1996, but the cultural impact was far greater. Filmed for a mere 200K, the movie notably launched the career of Vince Vaughn. The story goes that while attempting to get a use for the Jaws score cleared, Steven Spielberg watched Swingers and wound up casting Vaughn in The Lost World: Jurassic Park, soon making him a fixture in major Hollywood films. It also gave a big boost to the film’s writer and star, Jon Favreau, who’d go on to be a well-regarded director (an adequately regarded actor), most notably working on Iron Man, Elf, and more recently The Jungle Book. And the director of Swingers, Doug Liman, also saw his career jump-started by the film, winning an MTV Movie Award for Best New Filmmaker and going on to direct a few notable action flicks, including The Bourne Identity and Edge of Tomorrow.

The era that Swingers came out during greatly contributed to the movie being widely seen after its initial theater run. Put out by Miramax, it capitalized on what was a golden age for the distribution company, following their success with Tarantino titles to help really turn people on to independent films. In 1996 alone, Miramax offered up Trainspotting, Emma, Beautiful Girls, Sling Blade, and eventual Best Picture winner The English Patient. Given the right marketing campaign and enough word of mouth, indie films were finding an audience after the theaters, bolstered by rentals, sales, and cable TV.

But to watch it, Swingers hardly plays like an “indie” at all. In an interview from 2006 celebrating the 10-year anniversary of Swingers, Favreau notes that if the film had been made a decade later, it could have easily been a mainstream film. The story of Favreau’s Mike Peters dealing with a difficult breakup with his New York girlfriend by relocating to Los Angeles to pursue his acting career is generally a light and easy watch. There’s a trip to Las Vegas with his friend Trent Walker (Vaughn) and nights spent trying to meet girls at Hollywood Hills parties and trendy LA clubs, all punctuated by sharp dialogue and catchy phrases, turning quips like “You’re so money and you don’t even know it” into common vernacular.

Twenty years later, though, a movie so reliant on the time and place that it was created could easily feel stale. Certain scenes in Swingers stick out with their ’90s references, and it’s fair to question whether a younger audience would relate. There’s Trent and Sue’s (Patrick Van Horn) obsession with NHLPA ’93, the hockey video game where fighting was removed but the ability to make an opponent’s head bleed was added (or, at least that’s how it’s presented in the movie. There’s actually a whole Grantland article about these hockey games where they note that this wasn’t actually the case). It’s a true “’90s kid” moment, and there are subtler instances, too, like the entire gang putting The Club on their car to prevent theft or the fact that Sue walking into a party while smoking a cigarette isn’t given a second glance.

And for those of us who’ve spent significant time in the city of Los Angeles, it’s remarkable how much has changed in the last 20 years. The city is practically a character within the film, informing the difficulties they find in their jobs and love lives. When a woman asks Mikey what kind of car he drives and scoffs when he says a Cavalier, of course the lady has no interest in him. After all, it’s LA. And of course conversations will fixate on auditions and booking agents, as this is Hollywood. Not to say that this doesn’t still happen in LA, but it’s a toe dip into a giant swimming pool of culture.

If you need physical evidence at just how much the world of Mikey and Trent has changed, an excursion to some filming locations provides that. First there’s Las Vegas. In the movie, the guys note that they’re foregoing the Strip in favor of some of the Old Vegas flavor. They arrive at the Stardust Resort and Casino (though the interiors were actually filmed at the Fremont Hotel and Casino), but now the space looks something like this.

The Stardust was imploded in 2007 and is now the future home of Resorts World. Back in Los Angeles, there’s The Derby, the location where the guys travel through the back entrance to see Big Bad Voodoo Daddy, with Mikey notably meeting Heather Graham’s Lorraine, dancing with her, and winning her affection. But The Derby has also been closed for several years, now a split location that houses a hip Los Feliz restaurant, Messhall, and a Chase bank.

The Best Western diner where the gang meets up throughout the film is still in existence, but it’s undergone a rebranding, and the hotel was given a nice makeover.

Even little details are noticeable, like the way the Los Feliz has faded off the golf course sign or the drastic increase in parking rates in the lot where Sue pulls the gun.

This all goes to support one of the central ideas within the film, that these characters are existing at a sort of crossroads. From the style of Mikey, Trent, and their friends to the music that soundtracks their lives, they’re holding on to very old ideas of the West that even in the ’90s were rapidly disappearing. While in Las Vegas, Mikey makes the off-hand comment to Trent that “the new places down on the strip, now, those places are supposed to be it,” to which Trent replies, “You don’t want all that fuckin’ Pirate of the Caribbean horseshit or the rock and roll grunge tip.” This was before a new casino was opening every year, before the opening of the Bellagio or Cosmopolitan or Wynn or a dozen others. The swing culture that the movie helped revive was a nod to a dying ideal, where a city’s history and personality could give it a certain cool, where there was a sense that the effort you put into finding the best bars and clubs would be returned to you. Twenty years later, that LA is only found in movies and in guided tours, something for travelers to feel cultural while dumping their money into our local economy.

But that makes it seem like Swingers doesn’t still work on many levels. It does, and it’s because of the simple fact that heartbreak is timeless. The heart of the narrative and the source of its comedy is just how pathetic Mikey becomes when dealing with his breakup. It resonates for anyone who’s felt lost after losing love, and how it serves as a catalyst for the action of the film still makes sense, even if some of the specifics of how we approach romance in 2016 have changed. The emotions he experiences and the advice his friends give him all ring true. In an early scene, his friend Rob (Ron Livingston) informs him that his ex won’t call until Mikey has gotten over her. “Somehow they know not to come back until you really forget,” he says. Neither time nor technology have fundamentally changed the anatomy of love and relationships.

And Mikey does forget about his ex as everyone eventually does. There’s something triumphant in the spirit’s ability to heal even when during the whole movie it seems so impossible for the character. Swingers isn’t the first or the last movie to attempt or to succeed at this kind of insight, but its heart is what allows it to endure. Or if you just want to marvel at how young and thin Favreau and Vaughn look, it’s great for that, too.