Eighteen years later, the legendary trio from Queens returns with a triumph 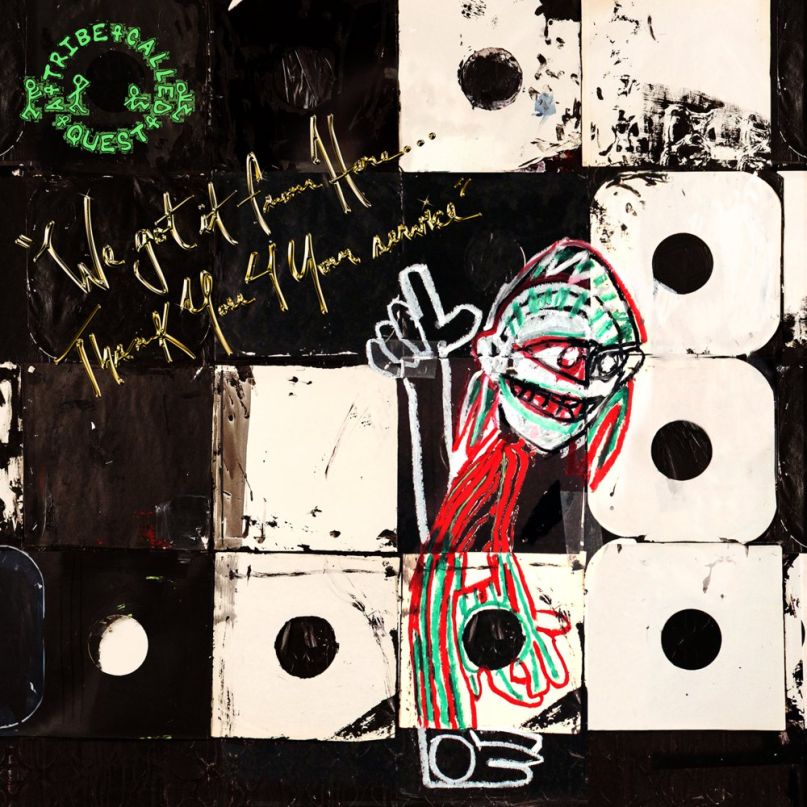 The comeback album tends to be tricky for a lot of artists. However, the circumstances were uniquely difficult for A Tribe Called Quest in returning with their sixth album and first in 18 years, We got it from Here… Thank You 4 Your service. The group’s original home of New York City (or, more specifically, the borough of Queens) is no longer the uncontested rap mecca it once was, as the scenes and styles of places like Chicago, Atlanta, and Los Angeles more consistently thrill newer generations of listeners. There’s also Tribe’s reputation as innovators to consider: While they were pioneers for, among other things, integrating hip-hop and jazz in the early ’90s, today’s rap is so diverse that it seemed like the best Tribe could hope for was an album that longtime fans would embrace, but excite few younger listeners unfamiliar with the group. As it turns out, We got it… is a triumphant defying of such expectations.

Before Tribe convened to make this album, Phife Dawg — who died in March due to complications from diabetes, aged just 45 —  had been trying to persuade the rest of the group to get together again for a while. He was told again and again that the time wasn’t right. Though, when the group performed on The Tonight Show Starring Jimmy Fallon last November, everyone’s enthusiasm grew. According to this New York Times piece, it was the same night that Q-Tip said, “Let’s just do an album! Let’s just start tomorrow!” Ali Shaheed Muhammad was busy working on music for Netflix’s Luke Cage and Phife was working on separate material at his home near Oakland, but Phife and White eventually found time to journey to Q-Tip’s New Jersey home and studio for recording sessions. There, after Tip and Phife mended their then-wounded relationship, Tribe recaptured the energy that made them such an important and inimitable act in the first place.

By and large, We got it from Here… has the classic Tribe sound: a warm and crisp confluence of East Coast hip-hop, jazz, and more, all mixed and mastered impeccably. While some aspects of the sound are dated, others feel fresh. The live instrumentation — guitar, keys, bass, drums, and more played by the likes of Q-Tip, Jack White (!), and Elton John (!!) — makes the album feel as alive as any other rap release made today, while the guest vocals from relatively new faces like Kendrick Lamar and Anderson .Paak further modernize the sound. Meanwhile, the members of Tribe all come with a sense of urgency and camaraderie. It never feels like they’re just going through the motions.

Lyrically, the album is particularly of-the-time, starting with opener “The Space Program”. “It’s time to go left and not right/ Gotta get it together forever/ Gotta get it together for brothers/ Gotta get it together for sisters,” Tip and Phife rap during the chorus, powerfully igniting the album’s sociopolitical side. The very next song, “We the People….”, is even more overt, with Tip and Phife tackling topics including gentrification, deportation, and homophobia. Later, on the Kendrick collab, “Conrad Tokyo”, Phife is at his most fed-up: “Move with the fuckery/ Trump and the SNL hilarity/ Troublesome times, kid, no time for comedy.” All of this is delivered with the authentic sense of dissatisfaction that tends to be at the heart of the best political music.

As much as they represented the Native Tongues collective and Afrocentrism, Tribe never got carried away with their intellectual tendencies, leaving plenty of room for shit talk and technical showmanship. We got it… is a well-executed balance of that, too. The flows are consistently dazzling, whether they’re coming from a Tribe member, longtime collaborators Busta Rhymes and Consequence, or the various other rappers (like Andre 3000, Talib Kweli, and Kendrick). Tribe is still clowning corny MCs, too, as Phife does so swiftly on closing track “The Donald”: “Fuck your ass-cheek flows with bars sweeter than scones.” There’s swagger in that line, and in the end, one of the most appealing aspects of the album is how much fun everyone seemingly had while making it.

Tribe didn’t finish the album until after Phife passed, and certain moments wouldn’t be here if he were still alive. On “Black Spasmodic”, Tip fondly remembers his friend: “Through mixing chords and boards and even drum machines/ He be saying, ‘Nigga, fuck awards, keep repping Queens.'” Singer Katia Cadet’s chorus on “Lost Somebody” is likely to induce tears from longtime Tribe fans: “Have you ever lost somebody?/ Way before ya got to dream?/ No more crying, he’s in sunshine.” It’s a sentiment similar to something White said of Phife in that same NYT interview: “Doing this album killed him. And he was very happy to go out like that.” Assuming this is the last Tribe album, as it supposedly is, everyone else involved in its making should be pleased with it as a goodbye, too.

Essential Tracks: “We the People….”, “Dis Generation”, and “Lost Somebody”