On her sixth album, the Grammy-winning pianist returns with political, social, and emotional honesty 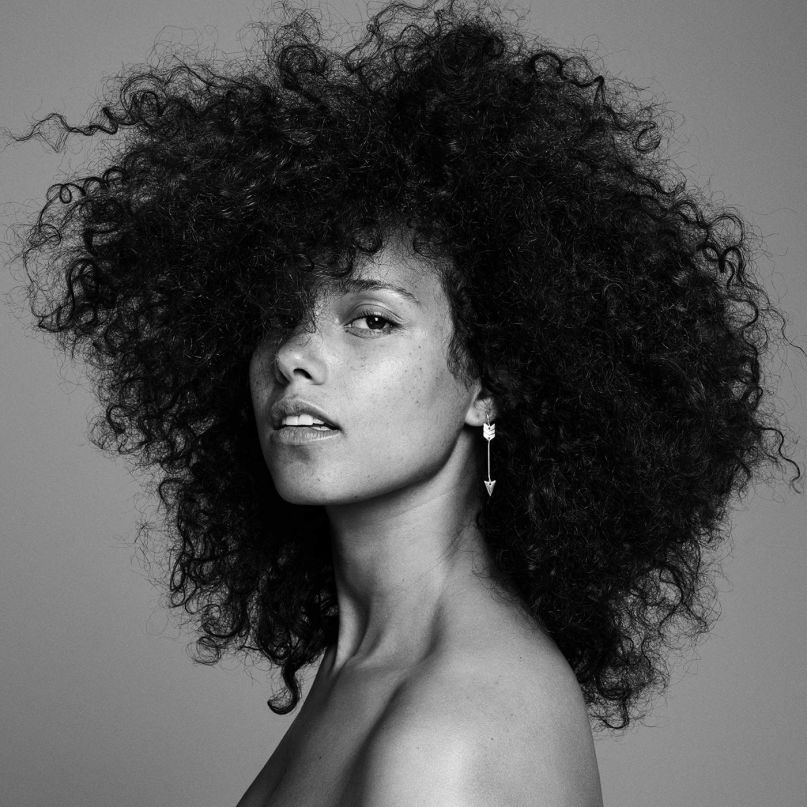 At this year’s MTV Video Music Awards, Alicia Keys made headlines for walking the red carpet without makeup. For those who had been paying attention, this wasn’t anything new. As a musician who has been rooting herself deeper in meditation practice, a parent embracing motherhood, and a celebrity increasing her philanthropy, Keys stopped dolling up months prior. In the four years since her last record, she’s been knee-deep in artistic, political, and socially conscious work, all of which surfaces on an end product: Here, her first full-length in four years. Keys sings about the political climate we’re in awe of (for better or for worse), the place in which she stands today (which both keeps her on edge and reinstates her confidence), and the values we need to uphold (even if others throw theirs to the wayside). As she narrates her life stories adjacent to those of fellow New Yorkers, Keys highlights themes she witnessed growing up that now, as a mother herself, she sees in a broader light. Turns out in 2016, Alicia Keys is too busy pouring herself into the world to let the world pressure her into following its outdated rules.

Last we heard from Keys, she was busy testing out electro-soul and hip-hop on 2012’s Girl on Fire. Now, she pushes herself to keep up an embrace of bareness. Half of the time she takes that literally, stripping her voice down to unfiltered basics, like “Illusion of Bliss”, belted so fiercely that she cracks her voice. The song — a reflection on the life of a 29-year-old drug addict who pursues a brighter future to avoid becoming a fallen angel, all the while bitterly aware that could never be reality — warrants emotional backing, but instead she keeps it simple, at one point letting her scratched tones build towards a clear, clean held note that rings into a fading police siren.

The other half of the time, Keys opts for straightforward storytelling. She trusts in her songwriting and its ability to carry a narrative on its own. It’s about perfectionism being pressed upon women and the empowerment that comes with choice, even if that means bearing stretch marks and bunions (“Work On It”) or unique attributes seen as impurities (“Girl Can’t Be Herself”). Paired with political numbers like “More Than We Know” and “Where Do We Begin Now” — which push for Americans to fight for their rights, whether tied to race or a same-sex relationship, respectively — these songs become a pile of truth. It’s the result of irritation, of the world’s standards setting unfounded bars to meet, and Keys sees those as a cue to motivate action. This is bareness beyond makeup; this is bareness we can all relate to.

Surprisingly, Here doesn’t struggle to balance this range of topics. Keys sings with authenticity and passion, occasionally delving into frustration, which keeps everything connected. What Here does struggle with is an unfinished commitment to order. The album showcases a desire to take form with pillared sections, with five interludes, each an audio clip of conversation. Artists use interludes to set a storyline in bold, to pronounce themes, or to smooth transitions between songs. These, although crucial to the larger discussion Keys hopes to spark, lose their power when songs that follow them don’t flow as seamlessly. “Blended Family (What You Do For Love)” is the only radio-styled hit on the album. It’s an uplifting song — as an ode to inclusion at large as well as her own multiracial marriage, it’s hard not to be — that loses steam thanks to its positioning between a song about drug abuse and a slow-rolling ballad about relationship difficulties. It’s jarring, though to be fair, her thoughts are likely scattered as well. If Here is meant to fully interpret Keys’ place both mentally and emotionally, then that structured but flawed order represents her honestly — but still it takes listeners out of the zone.

If this is where Keys finds herself in 2016, then we’re justified in feeling hopeful about the future. History repeats itself. If nothing else, that’s what hip-hop records of the past have taught us when compared to those of the present. “I feel like history on the turntables/ Old school to new school/ Like nothing ever been realer,” she sings on opener “The Beginning (Interlude)”, before tacking on a cold reminder: “And if you don’t let me in/ I’m the shot in the air when the party ends.” It’s a pairing of wax lessons with modern newslines.

Alicia Keys has never shied away from bold lyrics or moving ballads. The difference is that Here sees her embracing herself, from outer scars to inner struggles. As she cries out for environmental awareness on “Kill Your Mama” and begs for a balance of freedom and happiness on “Pawn It All”, she rips open a new side. Hearing Keys speak honestly and with unshakeable confidence is a welcome change. She’s becoming a voice of many, a protester in song, a teacher of empathy, and, above all else, someone who doesn’t need to cater to the radio. Keys’ voice is large enough to reach the masses, and this time around she has a handful of songs that will resonate deeper than the concrete jungle it colors.

Essential tracks: “She Don’t Really Care_1 Luv”, “Illusion of Bliss”, and “Blended Family (What You Do For Love)”