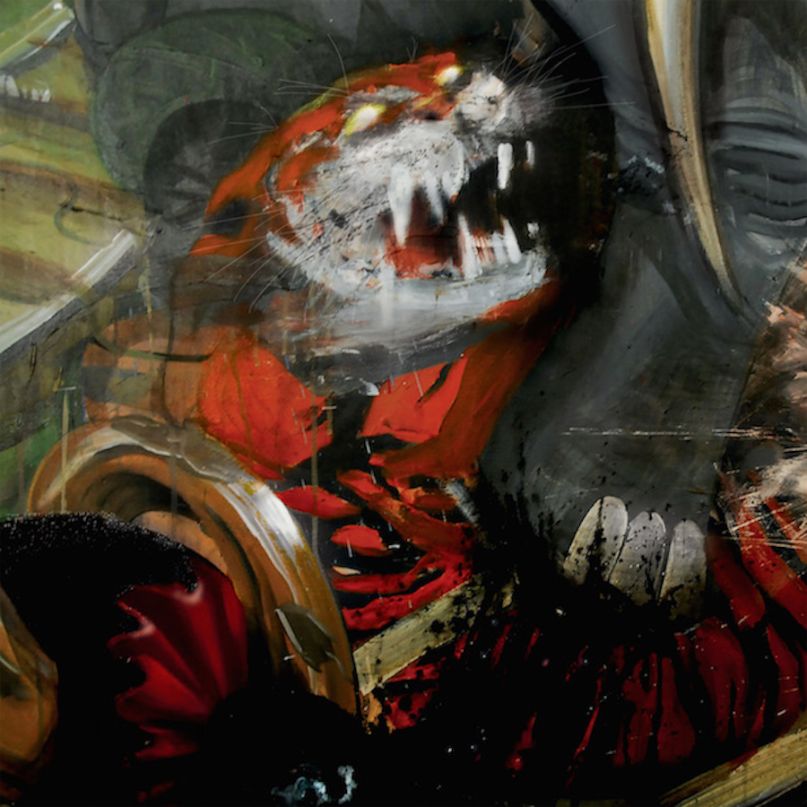 There’s always been a weird, dystopian euphoria to be found in the violent and swiftly executed songs of Sleigh Bells. The Brooklyn-based noise pop duo’s 2010 debut release, Treats, essentially forged its own genre, melding crunching glass percussion, machine gun guitars, and a general distorted, in-the-red aesthetic with the angelic, girlish, and dead-eyed croon of vocalist Alexis Krauss to create a soundscape that took great joy in its own nightmarish qualities. It was loud for loudness’ sake, yes, but it always managed to retain its nuance. Above all else, Krauss and multi-instrumentalist and producer Derek Miller were aces at covering their tracks and making it all seem effortless.

Jessica Rabbit, the group’s fourth studio release and first on their own label, Torn Clean, is splitting at the seams with the same monster riffs and relentless percussion that has marked their work all along. Sleigh Bells started off as Miller’s vision, with Krauss essentially acting as a session singer on Treats and working her vocals in a fashion that the two referred to as “dead baby doll.” The two barely knew each other when starting the band, and they have forged a partnership over the last six years that, as they pointed out in a Rolling Stone interview recently, takes time to develop.

Jessica Rabbit represents Miller and Krauss’ most equal distribution of labor yet, reaching beyond the zombie cheerleader chants of Treats and the demonic choruses of its 2012 follow-up Reign of Terror to allow Krauss to really emote. Here is the question at the center of the album, though: If all of Sleigh Bells’ catalog thus far has been a highly stylized mask, what, exactly, was hiding underneath? How do we learn to truck with real emotion once it’s finally revealed?

One of the biggest draws of Jessica Rabbit is hearing Krauss exercise her vocal range in ways that were only hinted at in the band’s most recent record, 2013’s Bitter Rivals, but never realized this extensively. There’s no better example of this than “I Can’t Stand You Anymore”, as close to an R&B-influenced track as this band is probably ever going to get. With help from hip-hop producer Mike Elizondo, who has worked with the likes of Jay Z, Busta Rhymes, and, improbably, Fiona Apple, Krauss lets her voice soar over hand-clap percussion. The song is a bold experiment, but it plods and meanders in a way that seems like the antithesis of what Sleigh Bells have been trying to accomplish thus far. The tempo-shifting opener “It’s Just Us Now” also sounds belabored, and it seems to have an entirely different song shoehorned into its last 30 seconds, creating a disjointed and disorienting experience that finds echoes in different places throughout the rest of the album.

Things pick up in the form of “Crucible”, a banging earworm in the tradition of the band’s catchiest fare. “I cut my hair with a pocket knife,” Krauss shares, right before the tempo changes. “Running on fumes and I was empty, believe me, believe me.” Once again, the tempo changes seem a little forced, but it’s such a joy to hear Sleigh Bells hit their stride again that the sin is forgivable. “I wanna listen, wanna listen to your heart,” Krauss coos on “Baptism by Fire”, before launching into the sublime and spooky “Hyper Dark”, which showcases her siren vocals to full effect.

Bitter Rivals seemed to demonstrate that Krauss and Miller were learning how to write effectively as a team, and there is still plenty of evidence of this process on Jessica Rabbit. The trade-off is being allowed to see them as real people instead of Miller as a puppeteer and Krauss as his dead-eyed mannequin. Truth be told, things aren’t too different under the artifice — there’s still malevolence around every corner, and Krauss and Miller still seem capable of the kind of foul play that would leave Miller bleeding from a head wound on the side of the highway. They may not have quite hit the mark of a perfect partnership yet, but sometimes progress comes at a price. Jessica Rabbit is at least a step in the right direction.