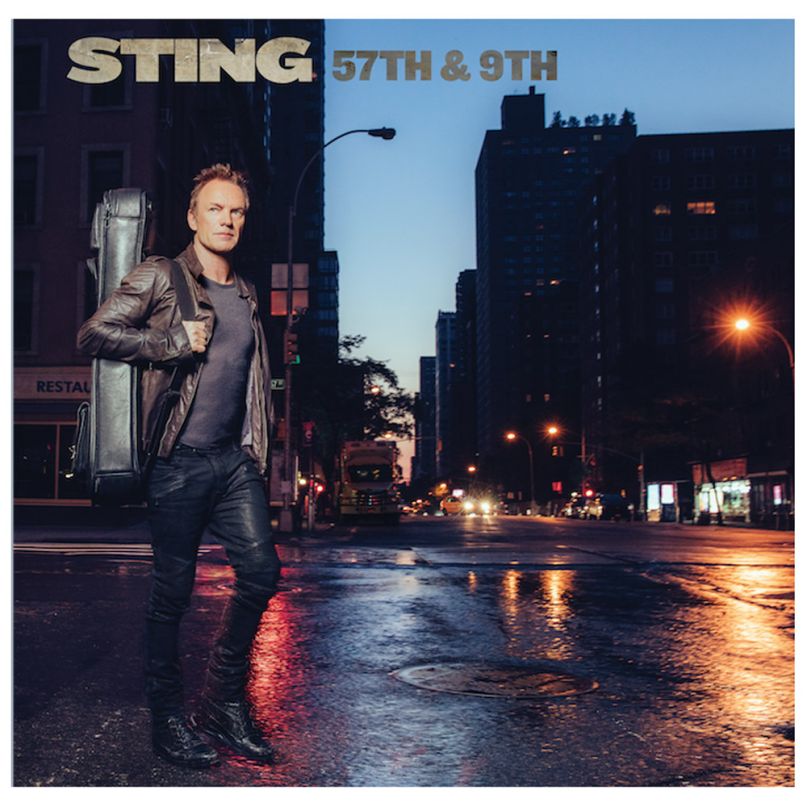 Across the last three decades or so, Sting has led one of the more interesting careers in popular music. Between New Age and world music-informed releases like 1993’s massive Ten Summoner’s Tales (which was carried by the adult contemporary classic “Fields of Gold”), Brand New Day in 1999 (which featured the unforgettable single “Desert Rose”), and the lute-centric Songs from the Labyrinth, it seemed like the guy who sang “Roxanne” and “Message in a Bottle” had forgotten how to rock. That feeling, though, makes his latest record, 57th & 9th, such an unexpected joy.

This is Sting’s first album since The Last Ship in 2013, the material for which came from his Broadway musical of the same name — and 57th & 9th couldn’t be a further departure. Whereas his last release dealt primarily with Sting’s own upbringing in the shipbuilding town of Wallsend, England, and was filled out by jaunty, singalong-inducing melodies tailor-made for the theater, this album is a stripped-down, 37-minute-long reconciliation with the sounds and styles that made him such a galvanizing force while a member of the Police.

The die is cast from the very first song, “I Can’t Stop Thinking About You”. Opening with a jangly guitar arpeggio, smacking snares, and ooh-ing backup singers, Sting sounds like a man transported back in time — albeit with a much deeper register. The energy is almost jarring, especially when he reaches the chorus, where his anguished, bewildered lament turns into an unbridled cry of frustration: “I can’t stop thinking about you/ I don’t care if you exist.”

The album itself is named after the cross streets in New York that the songwriter traversed every day to make it to the studio. 57th & 9th was recorded in just three months with drummer Vinnie Colaiuta and guitarist Dominic Miller from his touring group, as well as Jerry Fuentes, Diego Navaira, and Derek James from a Tex-Mex band based out of San Antonio called The Last Bandoleros. Simply put, the record doesn’t suffer for fussiness. Each day, Sting would show up to the studio without any real material or agenda, sit down with some musicians he was comfortable with, and just see what happened.

The resulting material is imbued with an energy and urgency severely lacking in much of the music that he has produced across the last decade and then some. “It’s rockier than anything I’ve done in a while,” he conceded to Rolling Stone. “This record is a sort of omnibus of everything that I do, but the flagship seems to be this energetic thing. I’m very happy to put up the mast and see how it goes.”

Rather than plumb his own personal history and mental state, 57th & 9th largely finds Sting interacting with the world as he views it today. “Inshallah”, an Arabic word that roughly translates to mean “If it’s God’s will and then it shall be,” is about the ongoing refugee crisis. “One Fine Day” tackles global warming and is directed toward all those who would deny its existence: “Apologists say the weather’s just a cycle we can’t change/ Scientists say we’ve pushed those cycles way beyond.” The final track, “The Empty Chair”, is a sort of elegy to renowned photographer James Foley, who was beheaded in Syria in 2014.

The standout song, and the one that will probably resonate with most people, is “50,000”. In it, Sting comes to grips with the loss of so many musical titans that passed in this last year: David Bowie, Prince, Glenn Frey, Lemmy, and more. “Another obituary in the paper today/ One more for the list of those who’ve already fallen/ Another one of our comrades is taken down/ Like so many others of our calling.” But it’s not just their loss that Sting laments; he also can’t shake the reality that his own end is inevitable, and may come sooner than he’d like. “Reflecting now on my own past/ Inside this prison I’ve made of myself/ I’m feeling a little better today/ Although the bathroom mirror is telling me something else.” Maybe this realization provided the impetus for the former Police singer to return to some of the sonic signatures of his youth. It’s hard to take it as coincidence that “50,000” happens to be the hardest charging song on 57th & 9th. Whatever the reason, it’s a pleasure to hear him singing over cranked guitars instead of pan flutes once again.